Writing user guides used to be part of how I earned my living. But this week I’ve been creating a smart home user guide on a purely personal basis.

When you’ve lived with smart home tech for quite some time, it all becomes second nature. But it’s easy to forget just how much there would be to learn for someone new to it all.

That’s a discovery we made when arranging for a friend to cat-sit later in the year. He’ll be living in our apartment while we’re on holiday, and it was only when we were showing him around that I realized quite how much there is to know – and he’s a tech guy by profession…

For example, you need to know which are the dumb lights, where you need to use the mechanical switches, and which are the smart ones – where using the mechanical switches to turn them off would disable the smart functionality. (Yes, smart switches would solve this problem, but there are limited UK options, and we like the mood lighting you can create with color Philips Hue bulbs.)

But there are all kinds of little details that only occurred to me while explaining it all. For a start, where to find the guest iPad.

You also need to know about the automations. For example, that the bedroom blind opens automatically at 7 am on weekdays, the robot vacuum sets to work at 8 am, the winter garden blinds close at noon and re-open at sunset – and so on. As well as how to disable these scheduled actions if you don’t want to be disturbed.

Or how to stop the motion sensors switching on lights when you don’t want them to.

And little hints and tips that would make someone more comfortable. For example, the fact that the guest iPad is magnetically mounted and can be carried elsewhere in the apartment if desired. Ditto the Hue light switches. As well as the names of all the lights, so they can use Siri.

The more I thought about it, the more there was to know. So I ended up creating a PDF smart home user guide for the apartment, complete with photos. It doesn’t just cover the smart home tech, there’s also mundane stuff about things how to ensure the door is locked behind you and where the cat food is kept and that kind of stuff. But a big chunk of it is smart home-related.

So, what does it cover? It starts with the dumb lighting. 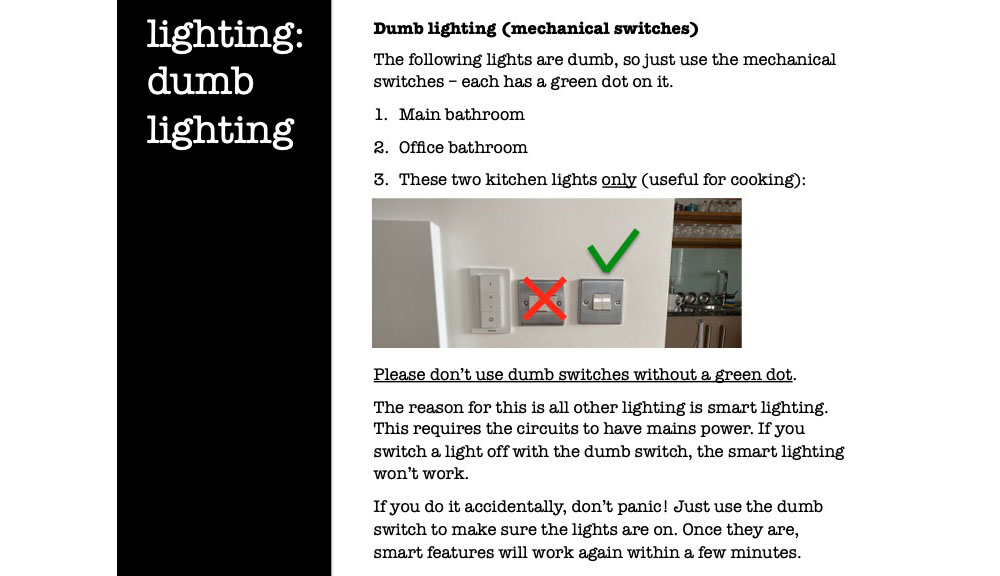 I realized it would be easier to label these, so have ordered some green dots for them.

For the motion sensors, I explain the basics – which lights are triggered, and that they go off automatically after two minutes without motion – but there are also important details that could confuse or annoy someone if they didn’t know.

Both hallway and kitchen lighting activates nightlight mode late at night. In the hallway, nightlight kicks in at 11pm. After that time, lighting will still come on, but only very dimly to avoid waking anyone in the bedroom.

The kitchen lights go into nightlight mode at 1am to avoid blinding you if you go to fetch water, etc, in the middle of the night.

In both cases, you can select normal lighting by using the smart switches (or any other method).

If you’re not familiar with the Home app, it’s not immediately obvious how to access the brightness and color controls, so this needs explanation. As well as a note not to accept the temptation of that little Edit button! 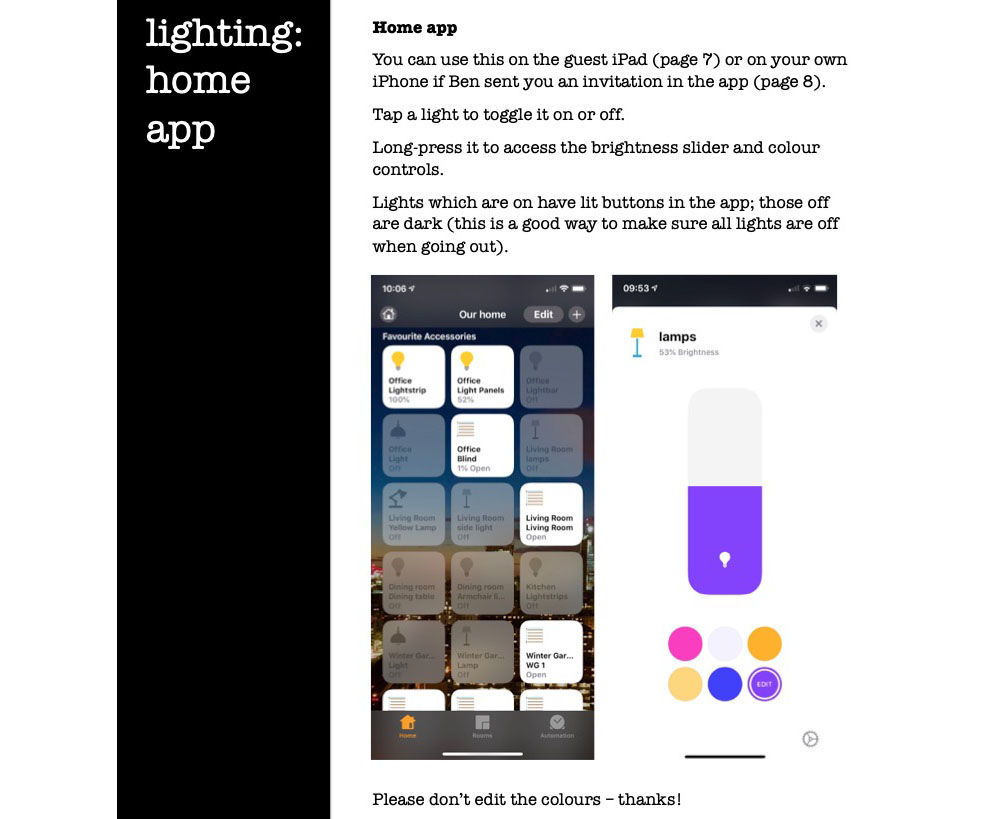 With four HomePods, Siri can hear you anywhere in the apartment, meaning guests have Siri control whether or not they own iDevices – but they need to know the type of commands they can give and what the lights are called.

We have a lot of grouped lights (for example, ‘Living room lamps’ controls four separate bulbs), but I decided not to get down to the detail of controlling individual lights within them – with the exception of the bedroom, where it’s useful if one partner wants to read while the other sleeps.

Here are some sample commands:

And here’s a list of the names of the lights:

Where lamps are grouped, you can also control them individually, but that’s getting a bit into the weeds! The one that might prove useful is individual control of the bedroom lamps:

The Music page explains the names and locations of the speakers, and the various permutations: AirPlay and Bluetooth, Apple Music and Spotify.

All-in, there are 13 pages on the smart home stuff – though you can see from the Home app example above that pages don’t necessarily have much text on them.

What’s been your own experience of guests staying in your smart home? How have you gone about letting them know how it all works? Anyone else created a smart home user guide? Please share your thoughts and experiences in the comments.