Tempo is an excellent run log iPhone app for doing more with running and walking workout data from Apple Watch. This week developer Rahul Matta released not one but two great updates to Tempo including a marathon-inspired version.

Visually, Tempo has a bold new look throughout the app thanks to full support for Dark Mode in iOS 13. The run log app now responds to the system appearance setting for automatically switching between light and dark themes, while the signature orange accents and heat bubbles pop through.

That’s part of Tempo 2.6 released for iOS 13, but Apple’s marathon software update release cycle continues with iOS 13.1 (and 13.1 miles is the half marathon distance). Naturally, Tempo needed a reason to race on to version 2.6.2 to give a nod to the 26.2 marathon distance. That’s where the second new theme tentatively titled Deep Blue first appears.

Tempo is primarily a free iPhone app, but there are more features to unlock with a premium membership that helps support the app’s development. With Dark Mode support added for free, premium subscribers unlock access to the ability to set the app’s mode independent of the system setting — dark theme in Light Mode or light theme in Dark Mode. 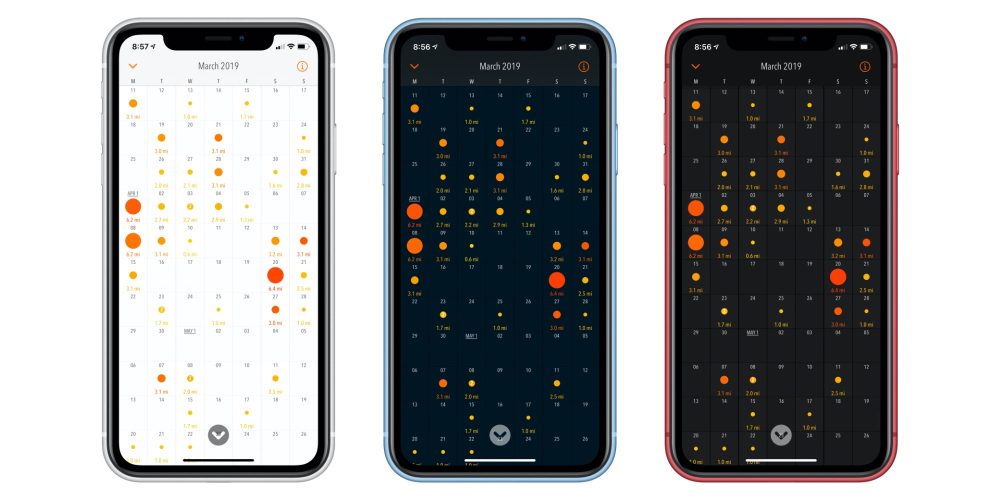 The new versions of Tempo aren’t just fresh coats of paint. Tempo is also a better run log for Apple Watch runners who log more than one running workout per day:

This release also includes a small, but important detail to the Intensity Log. There are times when we run twice in a day. Intensity circles for such days are now tagged with total runs. Tapping on a double run day will show a quick list of runs to select from and view details. And yes, it also works for 2+ runs.

Tempo 2.6.2 includes two bug fix and feature improvements as well, including the ability to choose between calories and kilojoules based on device preference:

Thanks to one of the runners from NZ for pointing out that the active energy is always displayed in Calories (instead of kJ for their locale). Very sorry for that, and it’s now fixed to use your locale based preference. As a side note, Tempo will request a new Health permission to access active energy data point. While Tempo could already read this data from our workouts, to detect the preferred energy unit (Cal vc kJ), we have to explicitly request to read the active energy data.

Download Tempo for free on the App Store, and consider supporting development with a premium subscription if you enjoy rich run data from your Apple Watch.