iPad Pro Diary: iPadOS 13 makes the argument for an iPad even stronger 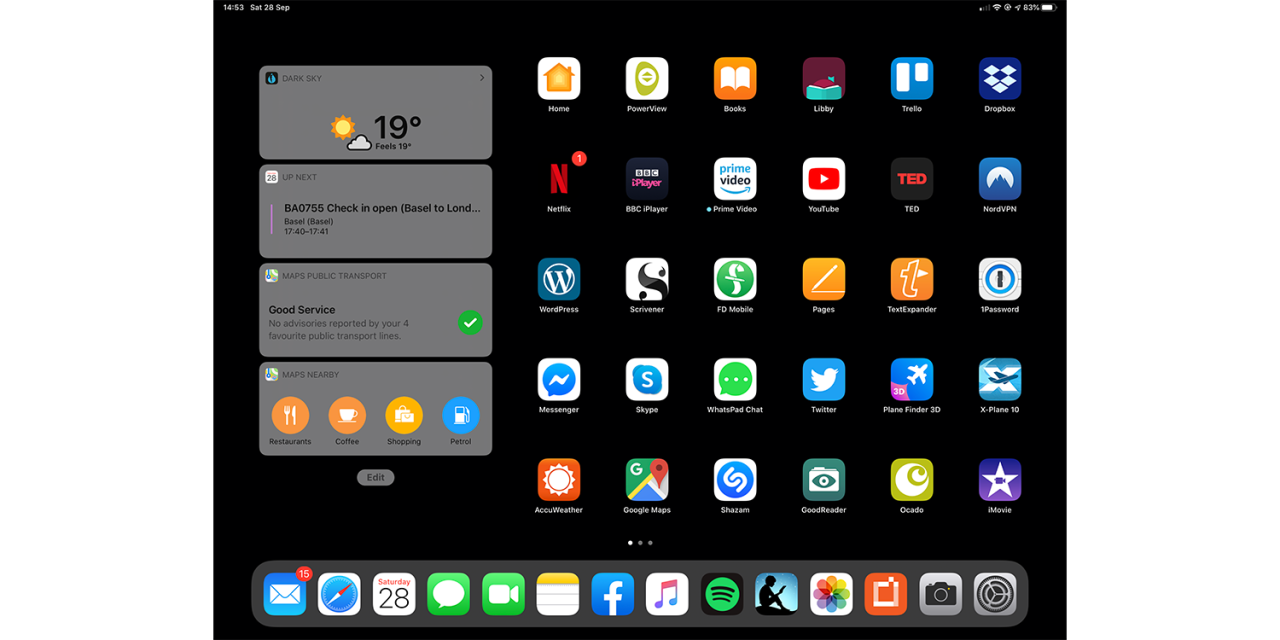 I felt that the new-form-factor 12.9-inch iPad dramatically strengthened the argument for an iPad over a laptop for those with relatively basic needs. I did, however, feel compelled to make the case for an iPad-specific version of iOS, so that the software would do justice to the hardware.

While the iPad Pro isn’t trying to be a Mac, it is a grown-up device and it needs a grown-up operating system. Not macOS, but rather a tailored version of iOS, designed to take advantage of the additional capabilities of the iPad. What some people have termed padOS.

Apple of course finally gave us that with iPadOS 13, and I have to say it makes a huge difference…

You might be wondering why I’m only commenting on iPadOS 13 now when the betas have been available for ages. That’s because all my devices are used every day, and I really don’t want to be dealing with beta bugs and battery-life hits. My diary pieces are based on my real-life use, and that definitely doesn’t include letting a beta OS anywhere near them.

One difference seems trivial, but always bugged me about iPads in general and the 12.9-inch model in particular: the ridiculousness of the vast empty wastelands between icons. It was an absurd waste of that beautiful display.

iPadOS 13 gives me absolutely all of my most frequently used apps on my main screen. Indeed, I even promoted a couple of less frequently used ones just to fill a bit of otherwise blank space.

And widgets on the Home screen also makes better use of the space. To be honest, I rarely used them before as it was just as easy to open an app as to swipe to the widget screen. But now it’s really handy to have the weather and my next appointment always visible.

Choosing Home screen widgets has, however, highlighted the fact that a lot of widgets are pretty pointless. The above two were really the only ones that I wanted always visible. It’s great to be able to pin them there, so they always are, but I struggled to find any others that were really useful. I opted in the end for Google’s public transport status and Nearby, but the former proved pretty useless when one line was closed all weekend for engineering works and Google was oblivious to it. I’ll look out for a better transport status app with a widget to replace that.

I now have four screens on my iPad:

Travel apps have their own screen because it’s really handy to have them in one place when traveling, and I found a folder was too fiddly.

The reason for that final screen is that I frequently try out new apps, including companion apps for review devices. I want to have quick access to these, but don’t want them cluttering up my standard app organization. Keeping them on this screen achieves both goals. Any apps I decide to keep get promoted to the first or second screen.

The ability to put Slide Over apps on either side of the display is one of those things which feels like it should be useful, but it’s honestly not to me. Because it hides part of the main window, I only ever use Slide Over when I want to quickly look something up, so which side of the screen it’s on makes no difference to me.

Similarly, the ability to stack Slide Over apps is cool in theory, but I can’t think of any time I’d do it in reality: to me, it’s just as easy to open the second app in full-screen mode and slide between them from the Home bar.

However, I do use Split View a lot, and the way this works in iPadOS 13 seems much slicker to me. The ability to have two different windows from the same app open in Split View is really handy. I tend to use Notes a lot, for example, for all kinds of different things, so being able to have two notes open side by side and easily move things between them is super useful. This is a huge upgrade in my view.

Which apps support multi-window Split View is, however, a guessing game. And the process still feels a lot less intuitive than a Mac. If you want to do a lot of multi-window work, I would say a Mac is still an infinitely better choice, but if you simply need to have two apps side-by-side, or two documents in the same app, iPadOS works really well.

Another small annoyance gone is there’s now a single long-hold gesture on an icon, and you can then choose between the shortcut actions and rearranging your icons. Never again will you get wiggly-icon mode when you don’t want it, or vice-versa!

I love the idea of gestures for copying, cutting, and pasting – especially between apps, or between different documents in the same app. I’m not yet 100% sold on the particular implementation here: it feels awkward to me, especially pasting. However, that may just be a case of getting used to it, so I’m happy to give it more time.

That’s pretty much it for the moment

There is, of course, much more iPadOS 13 can do. If you do want chapter-and-verse on all the things you can do in iPadOS, however, check out Jeff’s excellent video hands-on.

The above are the features I started using right away; I’ll be interested to see which of the rest prove useful in daily use.

What’s your take on iPadOS? Which features are you using right now, and how much difference does it make to your workflow? Do you think iPadOS has boosted the argument for an iPad over a laptop for more people? Please let us know in the comments.