PSA: Why Logic Pro X users might want to hold off on Catalina

While the imminent release of the latest macOS is upon us, there are some things to be aware of when it comes to running Logic Pro on Catalina. Home music producers beware as this update could very well silence your latest masterpieces if you’re not careful. Updating to Apple’s latest operating system too soon can yield all sorts of issues with your Logic Pro X projects using third-party gear, so be sure to hit the jump for more details.

Along with removing support for 32-bit code, tightened security measures in Catalina will also force third-party software makers to dig in a little deeper when preparing for Apple’s latest operating system. More specifically, but without getting overly technical, there are integral changes being made to the way software can access certain information and the way permissions and installers work.

Although Apple has relaxed some of the notarization requirements for developers, it could still very well cause longer than usual update delays for the third-party FX and instruments you use every day in LPX. Just running Logic Pro on Catalina won’t necessarily be a problem, it’s the rest of that third-party gear you need to watch out for.

Many of the security exploitations Apple is protecting us against in Catalina essentially look very much the same as what your typical DAW needs to carry out when accessing external software (third-party effects, instruments, and tools, etc).

For example, something like the popular KONTAKT sampler from Native Instruments will need to play nice with these new permissions in order to properly access library files and the like. To put it simply, (just about) all of your favorite third-party plug-ins are most likely going to need to be updated before they will work in Logic Pro on Catalina. And chances are, those updates won’t be ready on day one.

While the changes to hardened runtime and notarization sound good and all, don’t make the mistake of updating to Catalina too soon. In fact, we would recommend definitely not updating on day one or even week one. We’ve been burned in the past and the last thing we want to see is new music producers updating their web browsing system just to have their Logic projects rendered near useless in the process.

Now, it’s not the end of the world if we are just talking about casual music work via Logic Pro on Catalina, as your preferred gear will likely update at some point down the line. And you could always go through the extremely annoying process of downgrading your OS if needs be. But you’ll be stuck up a creek with a brand new shiny Logic Pro X boat and none of those fancy third-party paddles to run it in the meantime. 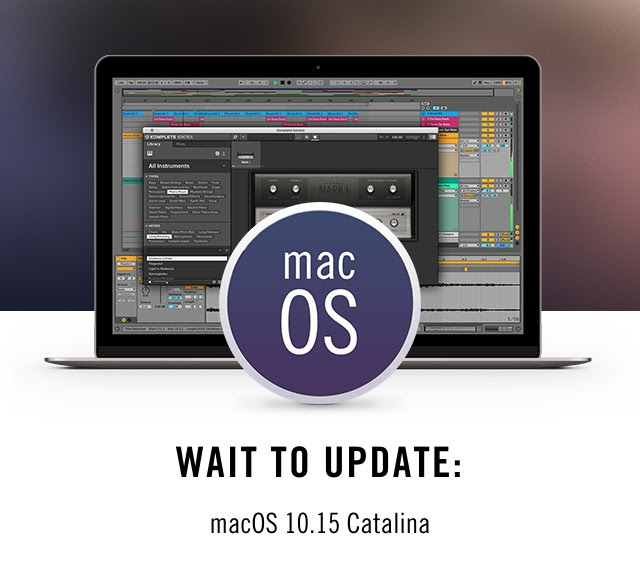 Some of the biggest virtual gear makers for the most popular DAWs have already sent out warnings. ROLI, Native Instruments, iZotope, Elektron, IK Multimedia, Steinberg, Soundtoys, and many more have all issued formal warnings to music producers stating their products are not yet ready for Apple’s latest version of macOS.

The Native Instruments comments on the situation echo most of the sentiment we have been hearing from several virtual instrument and FX makers thus far:

While Native Instruments has a particularly massive undertaking on its hands considering the sheer number of products it has to update for Logic Pro on Catalina (and every other DAW), most of the gear we use is in a similar situation. While there are some manufacturers out there that are going to be ready, some certainly will not. The main take away here? You probably don’t want to update your studio Mac system to Catalina until each of the gear makers you use specifically says to do so.

Again, this is nothing seasoned producers and engineers aren’t used to. It’s really more of a yearly tradition at this point. But if this article saved even one new songwriter’s epic masterpiece from update compatibility hell, then it was all worth it for us.

You can read more about macOS Catalina right here including more details on Sidecar, Apple Arcade, new dynamic wallpapers, and much more.