Apple News+ Diary: A short-lived trial that was good for me, not for Apple 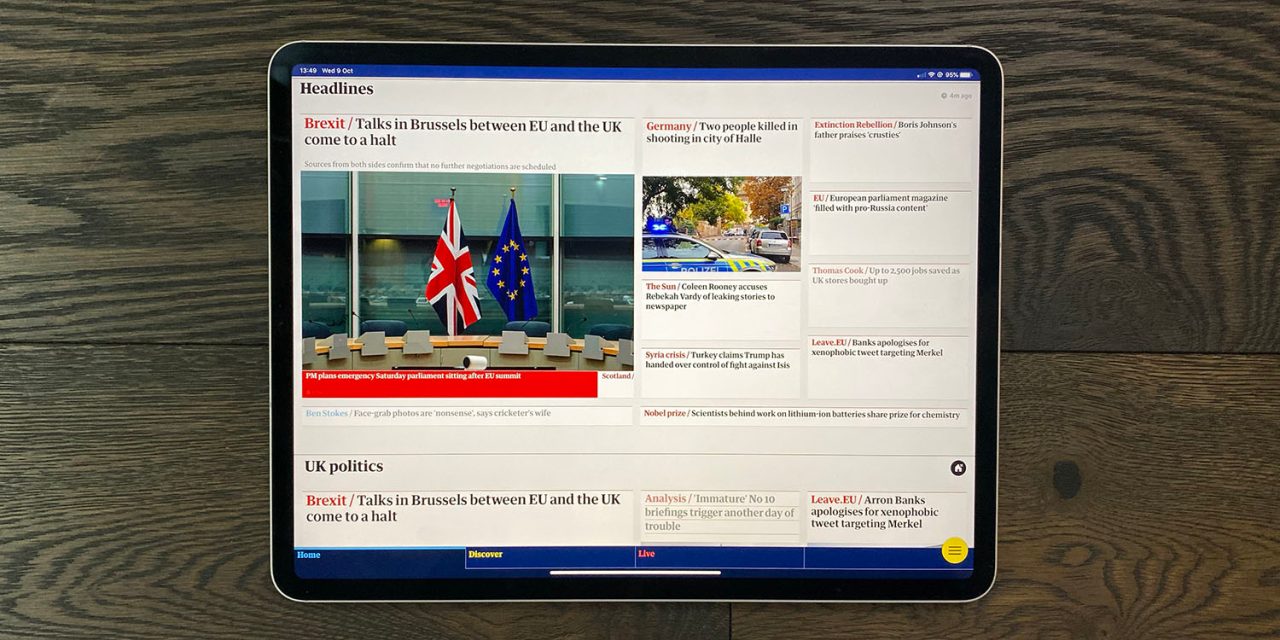 This will be the shortest diary series I’ve ever written! After providing my first impressions of Apple News+ in its UK incarnation just over a week ago, I’ve already canceled my one-month free trial.

Indeed, I was so confident in my decision that I canceled it without waiting for the trial period to end, despite the fact that this means immediate loss of access to the service.

However, while Apple failed to gain a subscriber from my trial, it was still an enlightening and useful exercise for me…

In trialing the service, I read coverage of the same stories from between three and six different publications. For some international stories, I read pieces in each of the following:

For UK stories that didn’t generate much international coverage, I read the four UK sources.

While this might sound like a lot of work, it didn’t feel that way, and that’s because of a fact it forced me to face: I’m a news junkie. Especially when it comes to politics, and most especially in an era of Brexit and Donald Trump, where there are new and bizarre stories on a daily basis.

Two things were enlightening about this exercise. First, and obviously, I got a good understanding of how the coverage compared across the various news sources. Some of the differences were unsurprising, reflecting the respective political stances of certain publications. The Guardian, for example, is more left-wing, while the Times is more right-wing, especially in its Brexit coverage.

But there were also notable differences in the depth of coverage, irrespective of standpoint. The Independent and Guardian stood out here, going into significantly more detail on political coverage in particular than other sources. I’d been a little frustrated at the shallowness of some BBC News pieces for some time now; they would fail to address things people would obviously want to know about the story. But it was comparing this coverage against the aforementioned papers that made me appreciate the extent of this.

The second enlightening fact was realising the breadth of news I read on a daily basis. This became clear when I had to narrow my selections in order to allow time to read the core stories in multiple publications. And the thing about this was: I didn’t feel I was missing out by doing it. I’d previously been reading stories that just didn’t matter that much, to feed my news addiction.

My conclusion then, was what what I really needed to do was stop reading BBC News and choose between the Guardian and the Independent as my primary source of news. The Guardian has much better opinion pieces, perhaps because the Independent is inhibited by its intended USP of balance.

I don’t think the Independent need feel that way, incidentally. It could easily feature opinion pieces with diverse views. I enjoy reading opposing views to my own — indeed, access to National Review Online was part of the appeal for this very reason. It’s good to understand the take of those with whom we disagree. And the Guardian, while it has a definite point of view, is still excellent at covering both sides of an argument.

I could have decided to read both, but I decided to also take executive action on my news addiction by cutting down on my news consumption. For that reason, it made sense to pick a single publication, and there it was no contest: The Guardian.

The end result, then, was that I canceled my Apple News+ trial. I relegated the Apple News app to my unused stock apps folder (I have enough storage that I don’t generally bother removing them), and took out a direct subscription to the Guardian. This is mostly unnecessary, as it doesn’t use a paywall, but I felt I should provide financial support as it was becoming my primary news source.

So thanks, Apple, for providing an opportunity to review my news consumption. Sorry it didn’t earn you a subscription.