When Apple announced the low-light photography capabilities of the iPhone 11, everyone was eagerly awaiting a new Night mode versus Night Sight test, aka Apple against Google.

PC World conducted one back in September, but that was against the Pixel 3 – the smartphone originally crowned the king of low-light photography. There were objections then that it was comparing different generations of smartphone tech, but it seems the position hasn’t changed now that the Pixel 4 is out…

PCWorld’s Michael Simon said in September that the iPhone 11 blew the Pixel 3 out of the water.

I’m simply blown away by what Apple has accomplished with Night Mode on the iPhone 11. When I first tried Night Sight on the Pixel 3 last October, I couldn’t believe what Google was able to do with its AI and processing. In no uncertain terms, Apple’s Night Mode makes Night Sight look amateurish.

MacWorld has now tested the iPhone 11 against the latest Pixel 4 and says that – so far, at least – it’s still, well, night and day.

We still have some more testing to go before we can reach a verdict on Google’s new Pixel 4 smartphone, but early results continue to show that it’s in for a big fight with the iPhone 11. We tested the improved Night Sight against the iPhone 11’s Night mode to see which camera could snap a better nighttime shot and the results are quite one-sided.

That’s very surprising. Apple’s Night Mode was largely seen as playing catch-up to Google’s version on the Pixel 3, and we all assumed that the Pixel 4 would take another leap to show Apple who’s boss. That might not be the case. In shot after shot, the iPhone 11 didn’t just turn extremely dark images into useable pics—it brightened the right spots, retained the right shadows, and simply handled the whole scene better than the Pixel 4. It’s subtle, but more often than not, the iPhone produced richer, more detailed shots without losing the natural darkness.

The site says that sometimes the iPhone 11 did an objectively better job, as in a city street shot.

Both cameras were able to illuminate the scene enough to see the whole building from a distance. However, Google blew out colors and lost much of the definition and shadows, while the iPhone 11 retained the integrity of the night and illuminated the parts that were shrouded in darkness.

The same was true of another street shot, where the iPhone had much better color accuracy. An indoor shot with the lights off was no contest (iPhone 11 right): 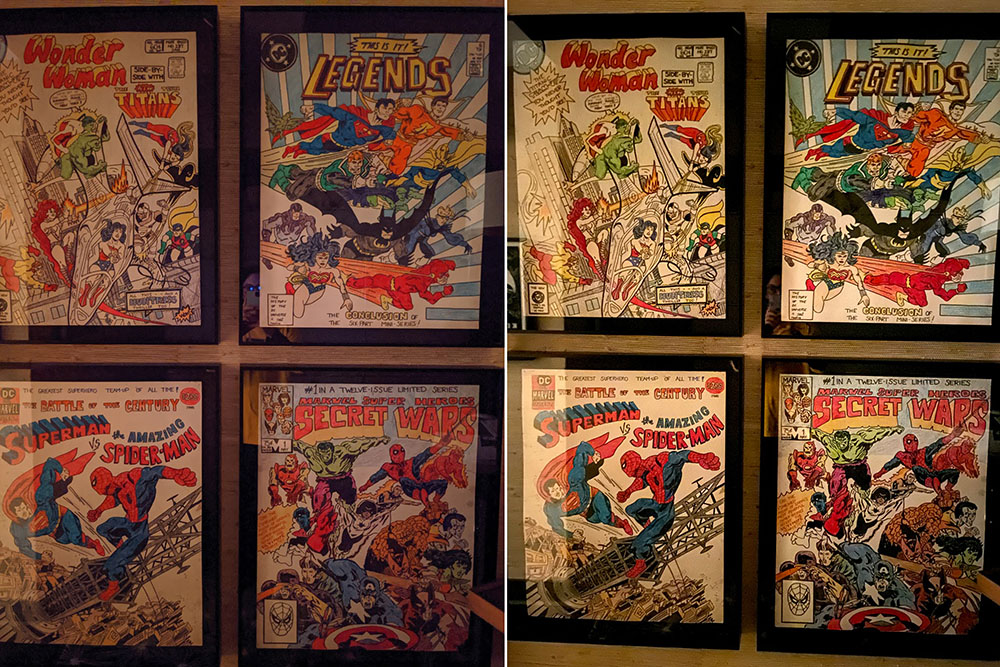 The Pixel (left) did win with this shot: 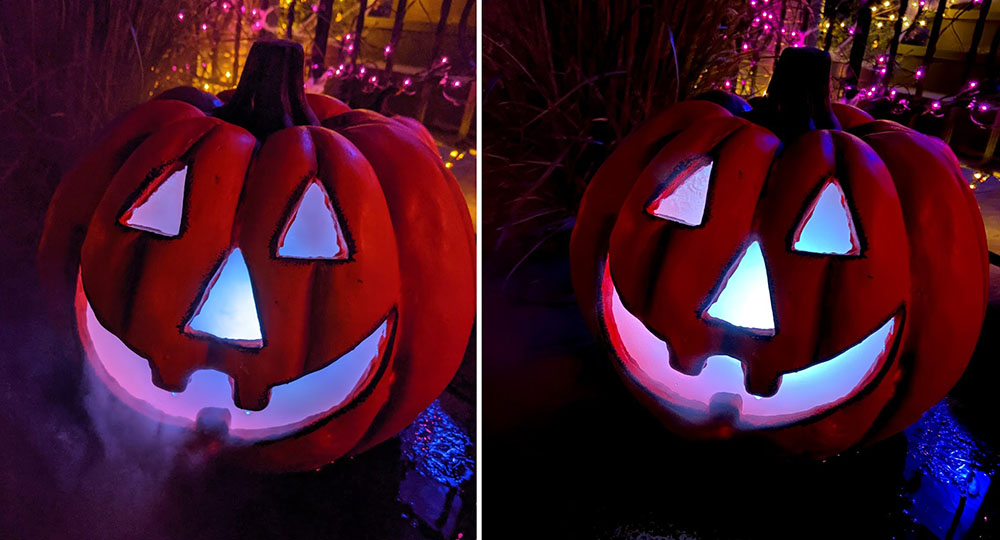 I found a situation where the Pixel 4’s all-over brightening is superior to Apple’s measured approach. The fog here is picked up much better by the Pixel 4 and appropriately spooky, while it’s practically invisible in the iPhone 11’s shot. I do think the iPhone 11 did a better job with the pumpkin’s shadows—and check out the inside detail in the left eye, but overall, I prefer the Pixel here.

I would query the significantly different framing in the city street shot at the top, as that could easily impact exposure and processing, but most other shots have near-identical framing.

There’s more testing to come, but so far, writes Simon, the iPhone 11 is the new king of the night. Check out the complete set of comparison shots over at MacWorld.

My own conclusion so far is that Night mode doesn’t meet the high bar needed to act as a travel camera, but does a fantastic job at social photography.