In today’s Logic Pros, we are taking a deep dive into the new EastWest Hollywood Backup Singers. The powerful vocal sampler instrument adds a trio of iconic Hollywood singers to your Logic Pro X library and directly beneath your finger tips. EastWest has been a major player in the premium sampler instrument game for a while now and its latest gives producers incredible ability to program three equally tenured, if not even more iconic, vocalists to their liking. Head below the jump for everything.

Hollywood Backup Singers is easily one of the best vocal sample libraries for what it does, but this thing is much more than your average collection of license-free vocal recordings you can sample into your songs. Featuring about 9GBs of meticulously recorded vocal patches, the backup singer samples here range from your typical collection of vowel based Ooohs and Aaahs to multi-instrument patches with intelligent key switch/modulation performance settings, and vocal oddities/noises. This is an entire vocal plug-in instrument with precise control over the microphone setup, world-class FX, performance options, and more. Unlike your average vocal-based instrument, EastWest’s Hollywood Backup Singers product makes use of the company’s powerful WordBuilder technology that allows it’s wonderfully recorded vocal samples to actually sing whatever lyrics you want.

Here’s a brief overview of the content included in Hollywood Backup Singers:

EastWest has brought on some serious talent for this collection as well. Durga and Lorelei McBroom (Pink Floyd’s backup singers for many years), alongside C.C. White (Lenny Kravitz, Al Green, Jason Mraz, and Crosby, Stills & Nash) are in top form here. Everything was recorded at EW’s iconic Studio 3 too — a room known for iconic recordings including everything from the Beach Boys Pet Sounds masterpiece and Blondie right through to Ariana Grande, Frank Ocean, and Lady Gaga’s Academy award-winning “A Star Is Born” soundtrack. 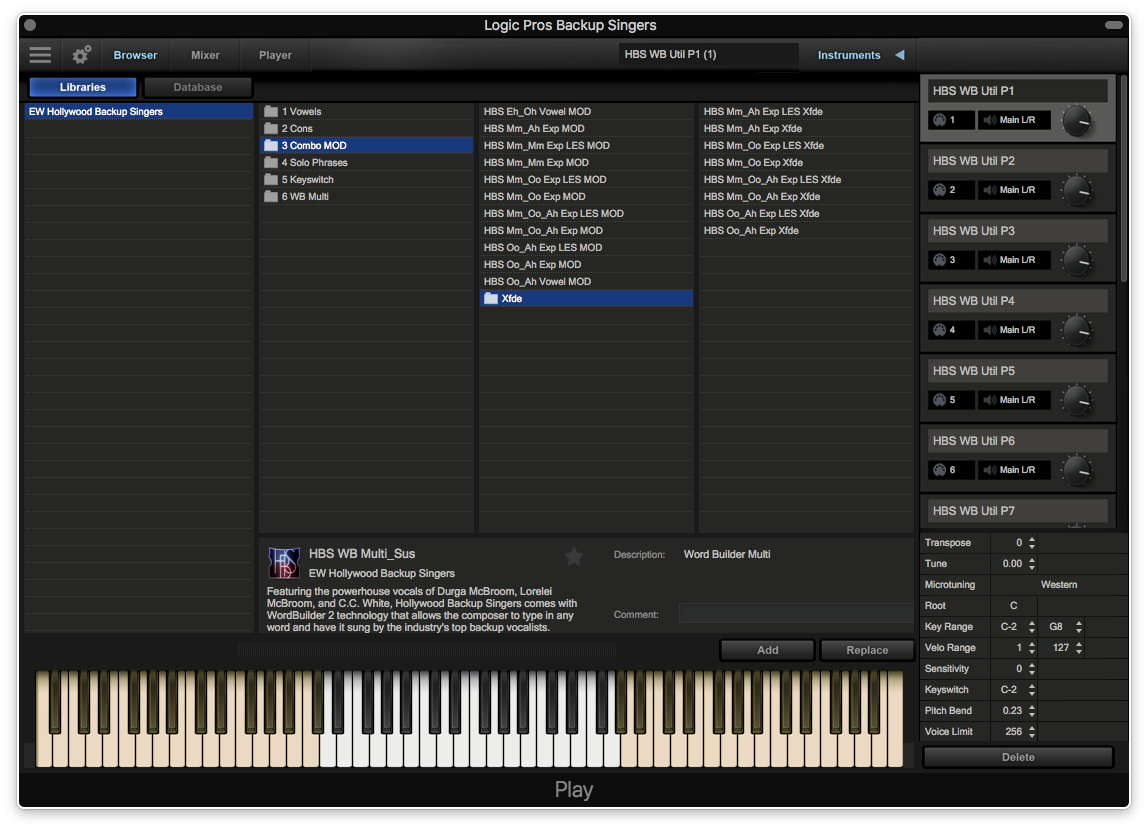 Hollywood Backup Singers works like just about any other plug-in instrument for the most part. You load one of the many vocal instruments up from the browser on EW’s free Play 6 instrument hub and you’re ready to go. As we mentioned above, these instruments range from the various vowel and pitched consonant sounds right through to solo phrases and vocal licks in each key. The functionality for each varies slightly including those with keyswitches — designated keys on your MIDI controller for switching between various sample sets on the fly — to split-instruments that allow you to play chords on the bottom half of your keyboard and solo phrases on the top.

The options are quite extensive for something solely focused on background singers if you ask me and is easily among the most impressive I’ve experienced of its kind. The Combo MOD set is a particular favorite among the batch here, especially the Xfde sub-category within. Here you’ll find combo patches with a pair of vowel sounds you can smoothly fade between (say from Mmmmm to Ooooh, for example) using your controller’s modulation wheel during the performance or programmed after the fact in your DAW. 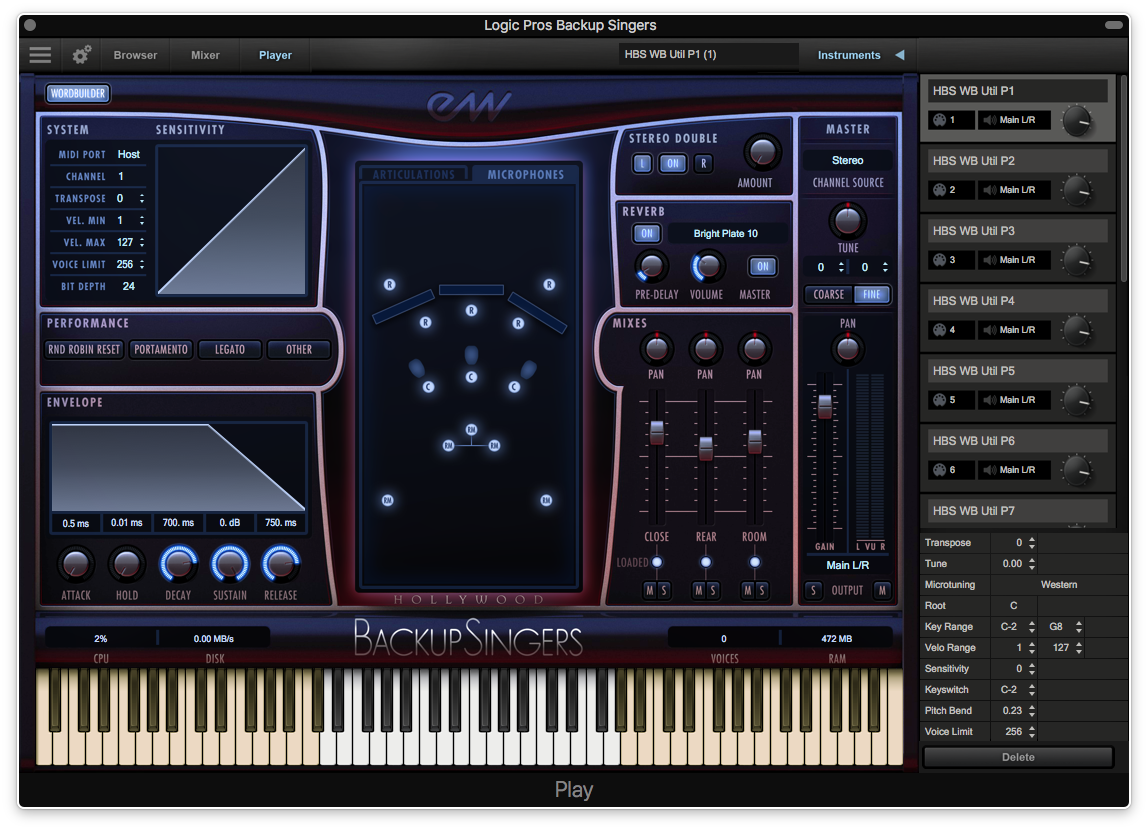 The Player page aspect of HBS is where users have control over the sound of the instrument chosen. This includes must-haves like the AHDSR envelope, master out tuning/pan/volume, per-instrument/master reverb (massive number of response types, pre-delay, and amount control) and some performance controls (Portamento, Legato, more).

You can’t record singers this amazing without an equally capable mic, which is likely why EastWest employed industry-heavy hitters like Neumann’s U47, a Telefunken 251, and a Shure SM7 (among others) when recording the HBS vocal sample library. And we also get quite a detailed level of control over the three-pronged microphone setup inside the plug-in. That includes the volume and pan balance of close, rear, and room mic arrays. Although, some expressive vowel and solo phrase instrument types in the built-in library — designated with “LES” when you’re selecting them in the Browser — also feature a fourth microphone setup that has been run through a Leslie speaker cabinet for a subtle chorus-like effect. These mic options are great for getting the vocal part to sit in a particular project just the way want whether it’s distant airy vocals drenched in reverb, a tight, in-your-face pop approach, or maybe something sitting nicely in between.

There’s also a full Mixer page with built-in FX. EastWest has brought some of its friends along for the ride here and we are in seriously good company, to say the least. That includes SSL channel strip-style EQ and compression along with a stereo bus compressor to finish things off. Amp emulation (Aguilar, Fender, Roland, Marshall, Mesa, and more), Ohmicide’s wonderful multi-band distortion plug, delay, a sweet sort of doubler style-effect, and the convolution reverb are also included. I for one usually prefer to keep my sounds dry from the software instrument and use FX and my Ohmicide from Logic instead, but in this case, I might need to rethink some things. Either way, the FX are here in full force. 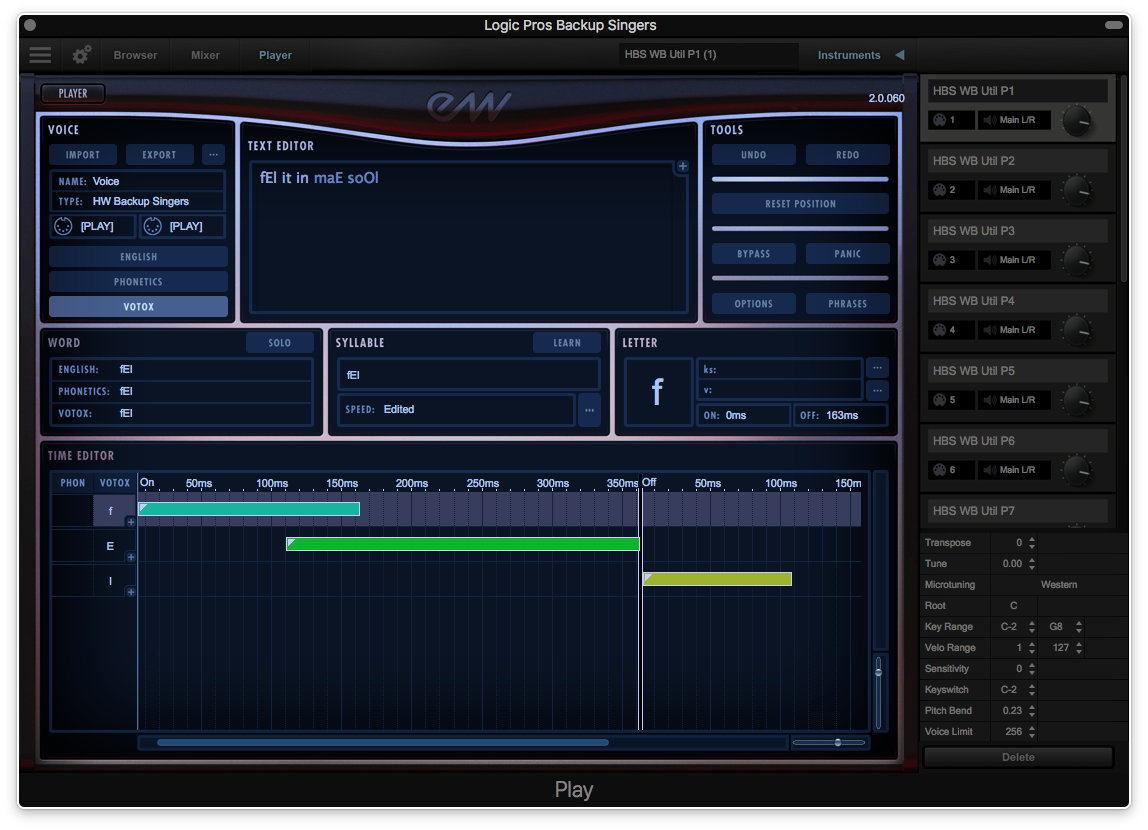 Even the best vocal sample library will struggle with being able to sing along to your next hit. But EastWest’s powerful Hollywood Backup Singers WordBuilder technology let’s you do just that.

Among the included instrument collection in the Browser, you’ll find one called HBS WB Multi. This particular preset is your entryway into the wonderful world of WordBuilder. Once this multi-patch is loaded up, the WordBuilder button will light up on the top left-hand corner of the main Player page. From here, we can use the text window to type in our own lyrics or select one of the 200+ preset phrases included from the Phrases menu. Essentially what we are looking at here is a meticulously crafted multi-instrument WB patch that consists of all the possible vowel sounds as well as both pitched and non pitched consonant sounds. It then intelligently selects which ones to trigger on its own based on the lyrics in the Text Editor window, every time you play notes on your keyboard.

It takes a touch of finesse and some mild patients at first, but I for one am impressed. It will default to the phrase “Feel it in my Soul,” written in WordBuilder’s odd, and yet quite effective native tongue known as Votox: “fEl it in maE soOl.” In this example, every time you strike a key or a chord on your controller HBS will sing the next syllable in the phrase. It sounds simple but once you start playing with chord progressions and multi-note melodies, they way grouped singers of this nature generally do, the results are quite magical.

WordBuilder’s native Votox language certainly takes some getting used to, but there are plenty of resources and tools in place here to help the cause. Firstly, the Voice section on the top left of the interface allows you to flip the Text Editor over to English so you can type your desired phrase in and allow the system to translate it to Votox automatically.

Due to the natural variance in sung phrases, this won’t always just work perfect right from the get-go. Separating your words with a space by syllables and adjusting the automatically created syllable time regions in the Time Editor are great places to start. From there you’ll have to familiarize yourself with the Votox translation in the manual and just use your instincts for the most part. Sometimes the word “out” gets translated to “uOt” and sounds great. But on another track, the manual translation of “Aut” seemed more appropriate, for example.

EastWest Hollywood Backup Singers has been a pleasure to work with thus far and even more useful than I initially imagined. The WordBuilder tech actually is as good as it sounds here in my opinion. You might have to be a total Jedi at using it before you’ll be able to just solo out a small group of computer-programmed singers in your next hit, but in a mix, with a lead singer on top, this thing sounds like the real deal to me. Despite all the FX and tuning options, I cannot help but want some kind of additional page for formant adjustments and other oddities to transform these angels into demonic alien choirs from time-to-time. But that’s not really what it says on the tin here. And frankly, things can get pretty wild with the FX suite if you want it to anyway.

All-in-all, EastWest’s Hollywood Backup Singers is the best in the game at what it does, and worth every penny for a professional who uses it for a living. But the regular $399 price tag might be a tough pill to swallow for hobbyists and aspiring composers. Fortunately, EastWest is certainly not immune to sales and you can take advantage of its “Stay at Home, Create and” save an absolutely massive 60% off right now, dropping your total down to $159.60.

All of our latest Logic Pros features can be found right here and here’s everything you need to know about what looks like an unreleased version of Logic Pro X with Apple’s Live Loops feature!