Review: Danalock, the device which finally persuaded me to get a smart lock

The Danalock has filled the last remaining hole in my smart home armory: a smart lock.

You could say I’m something of a home automation fan. I had near-withdrawal symptoms when briefly forced to live without it for a while after moving home back in 2017. Getting things back up-and-running was a great relief!

Lights and smart sockets were followed by window blinds (later given HomeKit compatibility), smart(ish) heating (though more on that another day), and even a control panel.

But I’d avoided a smart lock for three reasons …

First, physical security concerns. Smart features are no substitute for mechanical security, and a lot of the early smart locks weren’t compatible with high-security locks.

Second, cybersecurity concerns. It’s one thing for a security vulnerability to allow a hacker the ability to switch your lights on and off; something else entirely for them to be able to unlock your front door. I wanted a lot of reassurance on that front, and I trust HomeKit security more than any standard created by individual companies (even if there was a failure back in 2017).

Third, many smart locks have no key. While I personally would be happy with a mix of Bluetooth and keypad control, my girlfriend is not of the same view. She’s become a convert to most of our smart home technology, but does want the ability to unlock the door the old-fashioned way.

But a new smart lock option addressed all three options. At present, it’s only available as a conversion for an existing lock, but there will be a complete package with handles and a high-security lock. I got advance access to the complete kit. 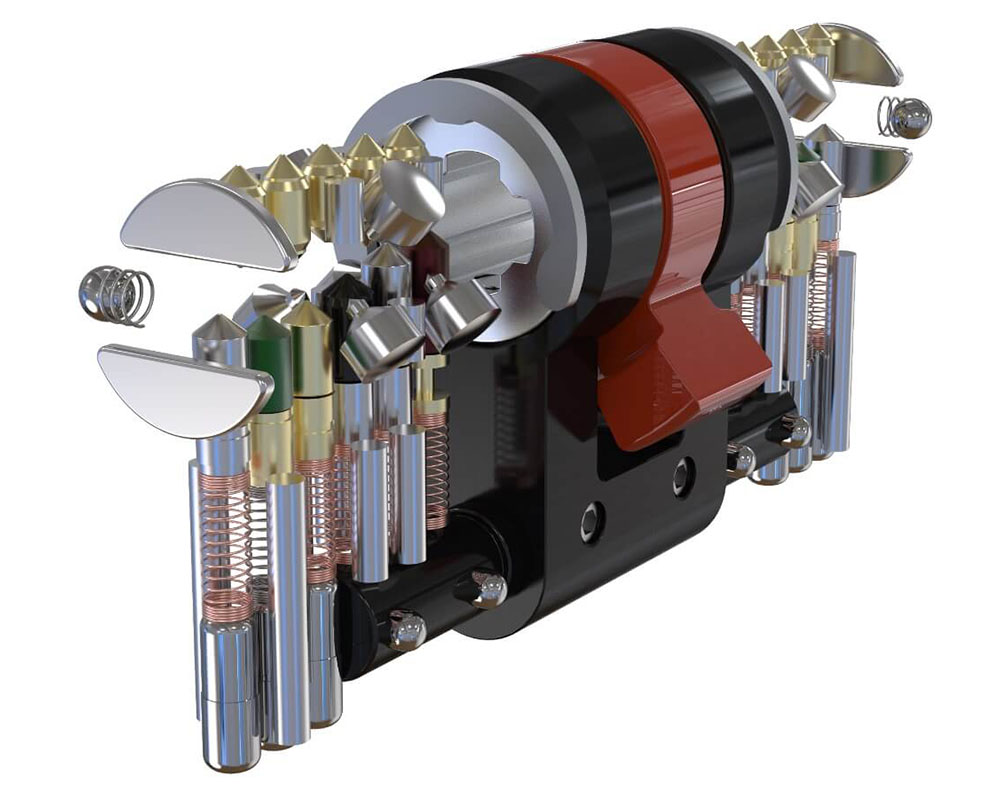 The HomeKit version of the Danalock satisfies all three requirements.

The complete package (sold in the UK under the Ultion Smart brand) will include a Brisant cylinder lock with a molybdenum core and 20-point drill protection. This meets the 3-star TS007 and Sold Secure (SS312) Diamond standards, the two main security standards for cylinder locks. Both mean that the lock is protected against ‘snapping,’ the most common method of forced entry. Any attempt to do this automatically triggers a lockdown mode, jamming the lock closed.

The HomeKit version means that it has to meet Apple’s extremely high cybersecurity standards. When you issue an unlock request, the Apple device uses an encrypted communication link to query the lock, asking it to prove it is a HomeKit device. The lock then queries the Apple device, asking it to prove it is authorized to issue the request. Only when this two-way check successfully completes will it unlock. (It is also smart enough to refuse if someone calls through the letterbox to a HomePod – it tells them that the instruction needs to be confirmed on an authorized iPhone.)

Opting for HomeKit rather than Bluetooth does mean accepting some feature compromises, explained below, but for me, these are offset by the cybersecurity assurance.

Finally, the lock cylinder is a keyed one, with a high-security key. Among the protections offered by this is that copies cannot be made without an encrypted code. When a company is asked to copy one of these keys, they have to request a code. The registered owner of the lock receives an email asking them to authorize the release of the code, and only then can the copy be made.

Compromises for HomeKit versus Bluetooth

Opting for the security of the HomeKit version does mean you get less functionality than the Bluetooth model.

First, you lose the option of adding a Bluetooth keypad. This would allow you to have up to 20 different PINs, which can be linked to a schedule (for example, only allowing a cleaner access on their regular day), but is not compatible with the HomeKit lock.

Second, the Bluetooth version lets you send electronic keys to people, to allow temporary or permanent access. With the HomeKit version, you instead need to add them in the Home app, which means they then get full access to your complete smart home network.

Third, the Bluetooth model can be set to automatically unlock as you come into range. With the HomeKit version, you can do the same thing with presence-detection, but that doesn’t work when you live on the 18th floor of an apartment block. I expected it to be triggered when I reached the building at ground level, but it usually isn’t triggered at all.

I’m a tech guy, but a complete klutz when it comes to anything mechanical. My DIY skills are legendary – for their complete and utter absence. However, even I managed to fit the complete system (new cylinder, new handles and Danalock) in about ten minutes. It requires only a screwdriver to remove and replace three screws.

If you’re just buying the Danalock itself, then it’s even quicker as you only need to replace the inner twist unit or keyhole. The unit is compatible with the three most common types of cylinders: oval lock Scandi cylinders, drop-shaped Euro cylinders, and US deadbolt locks.

Once the hardware is installed, there’s a HomeKit code slip. In the Home app, do the usual Add Accessory process and that’s it – no separate app required for the lock.

The Danalock itself replaces the twist-knob or keyhole on the inside of the door.

It extends further out from the door, at around three inches, but otherwise doesn’t look much different to the twist-knob it replaced. The part you twist is metal, while the rest of the cylinder is plastic, but does look much like metal.

For me, the single biggest benefit is the peace of mind of never having to worry about being locked out.

Our apartment building has a keyfob for entry, but the entryphone system connects to my iPhone, so for that I could buzz myself, answer on my phone and let myself in. Then at the front door, I can ask either my Apple Watch or iPhone to unlock the door.

As someone who has been through the complete pain of waiting two hours at 2 am for a locksmith to let me in, that alone is worth the cost.

Having the ability to authorize other people to unlock the door is also really handy. It means fewer spare keys needed, and less need to plan ahead. If we’re unexpectedly away overnight, for example, we can simply add a neighbour to the Home app and they can let themselves in to feed the cats.

‘Hey Siri, unlock door’ is all that is needed. Using the iPhone, it’s pretty much instant – within a second. On the Watch, it’s sometimes instant, and sometimes delayed by a few seconds. I think ten seconds is the longest delay I’ve experienced, but it’s usually three or four. That’s about as quick as getting the key out of my pocket and unlocking the door manually.

Depending on your door type, Siri may also be able to lock your door. Our lock requires you to lift the handle while turning the key, so it can’t be automated – which is a shame. Lifting the handle and then asking Siri to lock the door does work.

One nice touch is that no screwdriver is needed to replace the batteries. This shouldn’t be a frequent occurrence, as the claimed battery life is 18 months, but you can simply pull off the cover and snap it back on.

An element less well designed is the option settings! There are a bunch of options for auto-lock timings, and whether the latch on a Yale-type lock is automatically held back, but these need to be activated by multiple presses of a pin into a small reset hole on the top of the lock. This would be much better done in an app. There is an app available, but it doesn’t do anything the Home app can’t do, so there’s not much point in even downloading it.

There has been one unexpected benefit: being alerted if we forget to lock the door. This isn’t something I would do normally, but coronavirus precautions mean we have a new routine now:

That means it is actually easy to accidentally leave the door unlocked, but keeping the control at the top of my favorites means it’s very obvious when I’ve done it, as the icon will be lit, with red text. 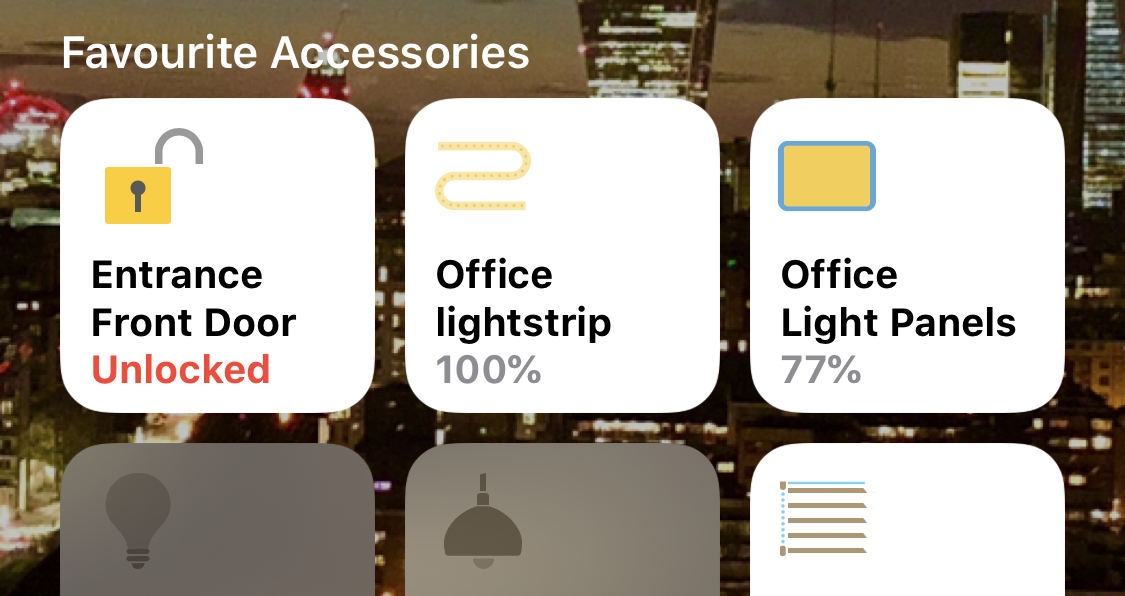 At $249 for the Danalock element alone, it’s a little pricier than some other options, but it is good quality and super-easy to fit.

It may appeal most to those looking to upgrade the security of their lock at the same time. The kit with the high-security lock will obviously make it a more expensive undertaking, and pricing isn’t yet known, but the entire system is something anyone can fit in ten minutes.

For me, the combination of physical security and HomeKit means that I am, for the first time, comfortable with a smart lock.

The Danalock HomeKit-compatible smart lock is available on Amazon for $249. In the UK, it’s available with handles as the Ultion Smart. A complete package, bundled with a high-security lock cylinder as well as handles, is on the way to both countries.