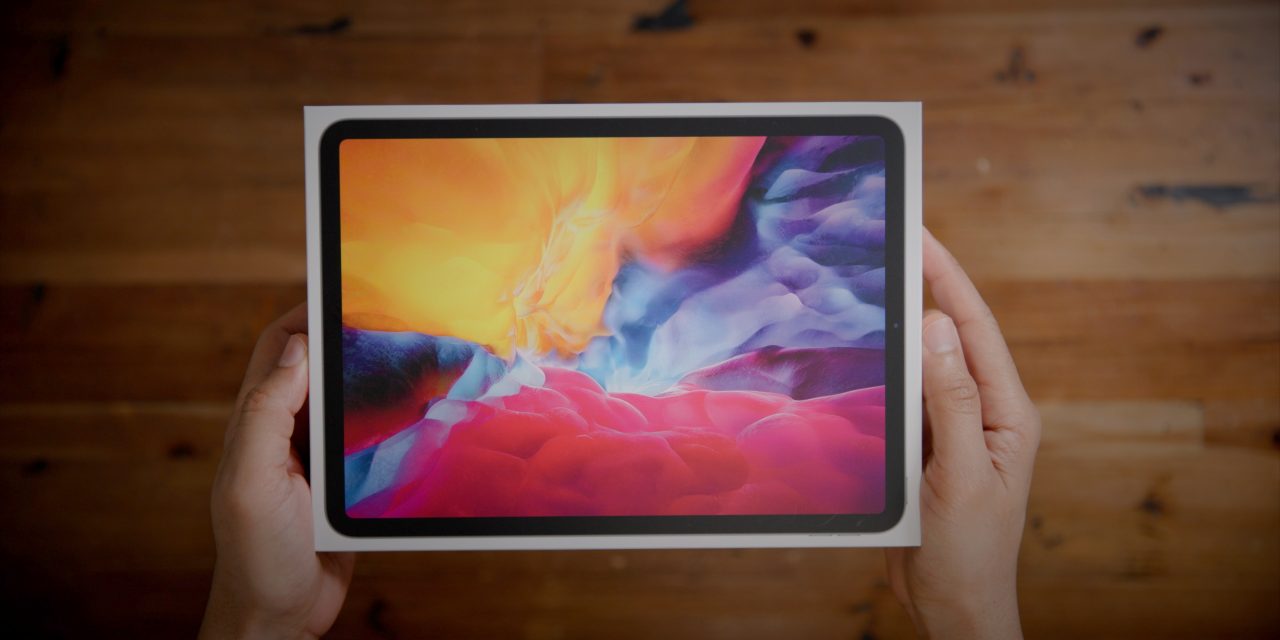 Let’s just cut to the chase: if you already own 2018’s refresh of the iPad Pro, you probably shouldn’t upgrade to the 2020 edition. That’s because this latest iPad Pro is more of an incremental update than its predecessors have traditionally been. In terms of specs, it’s probably the most lukewarm upgrade we’ve had in an iPad Pro since the often-forgotten 9.7-inch model was released in early 2016.

With that in mind, if you want a good idea of what to expect from the 2020 iPad, read our in-depth review of the 2018 model. Most of the hardware aspects still apply, but it’s the software updates that have really pushed the iPad forward over the last few years. The release of iPadOS 13, and now iPadOS 13.4 have transformed Apple’s tablet for the better.

If you held off on the 2018 iPad Pro update, this latest 2020 model should make you happy, as it’s an overall better value thanks to increased RAM and flash storage in the base configuration.

And thanks to the new embedded LiDAR Scanner, which ushers in impressive new AR capabilities, the 2020 iPad Pro also provides us with a sneak preview of what we might expect from Apple’s long-rumored augmented reality headset.

Watch our hands-on video as we discuss the top features and initial impressions of the 2020 iPad Pro.

Have an iPad Pro to trade in for the 2020 model? Check its trade in value here.

The biggest news surrounding this new iPad Pro isn’t the iPad hardware itself, but it’s the arrival of the brand new and long-rumored keyboard accessory, the Magic Keyboard for iPad Pro.

Although very pricey at $299 for the 11-inch Magic Keyboard, and $50 more for the 12.9-inch version, this accessory looks like a must-have add-on for iPad Pro users. The great thing about the Magic Keyboard is that it will work with both the 2020 iPad Pro and the 2018 models, so there’s no need to upgrade your 2018 iPad Pro if you’re interested in using it.

Special thanks to Hyper for sponsoring 9to5mac. Get the Hyper USB-C Hub for iPad Pro today.

The Magic Keyboard will no doubt represent the best overall typing experience for the iPad Pro, with backlit scissor switch full-sized keys featuring 1mm of key travel. It’s much closer to being like a standalone Magic Keyboard that ships with the iMac than the keyboard found in Apple’s Smart Keyboard Folio. 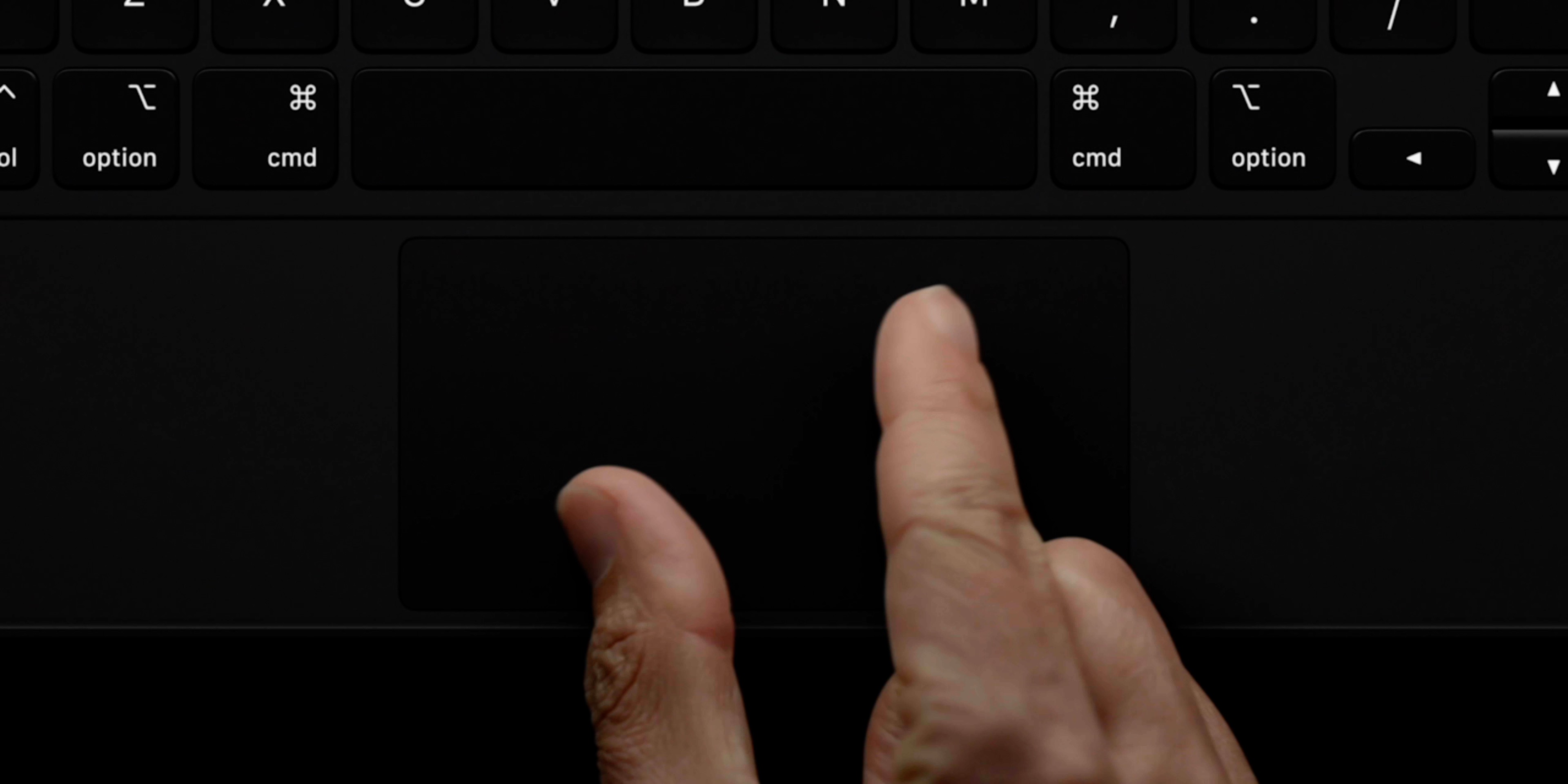 Perhaps even more important is the inclusion of a multi-touch trackpad, which allows you to take advantage of the new cursor and gesture support for trackpads in iPadOS 13.4. As we outlined in our hands-on video covering all of the new advanced cursor features in iPadOS, having a built-in trackpad that you can easily carry around with you is a game-changer for the iPad. 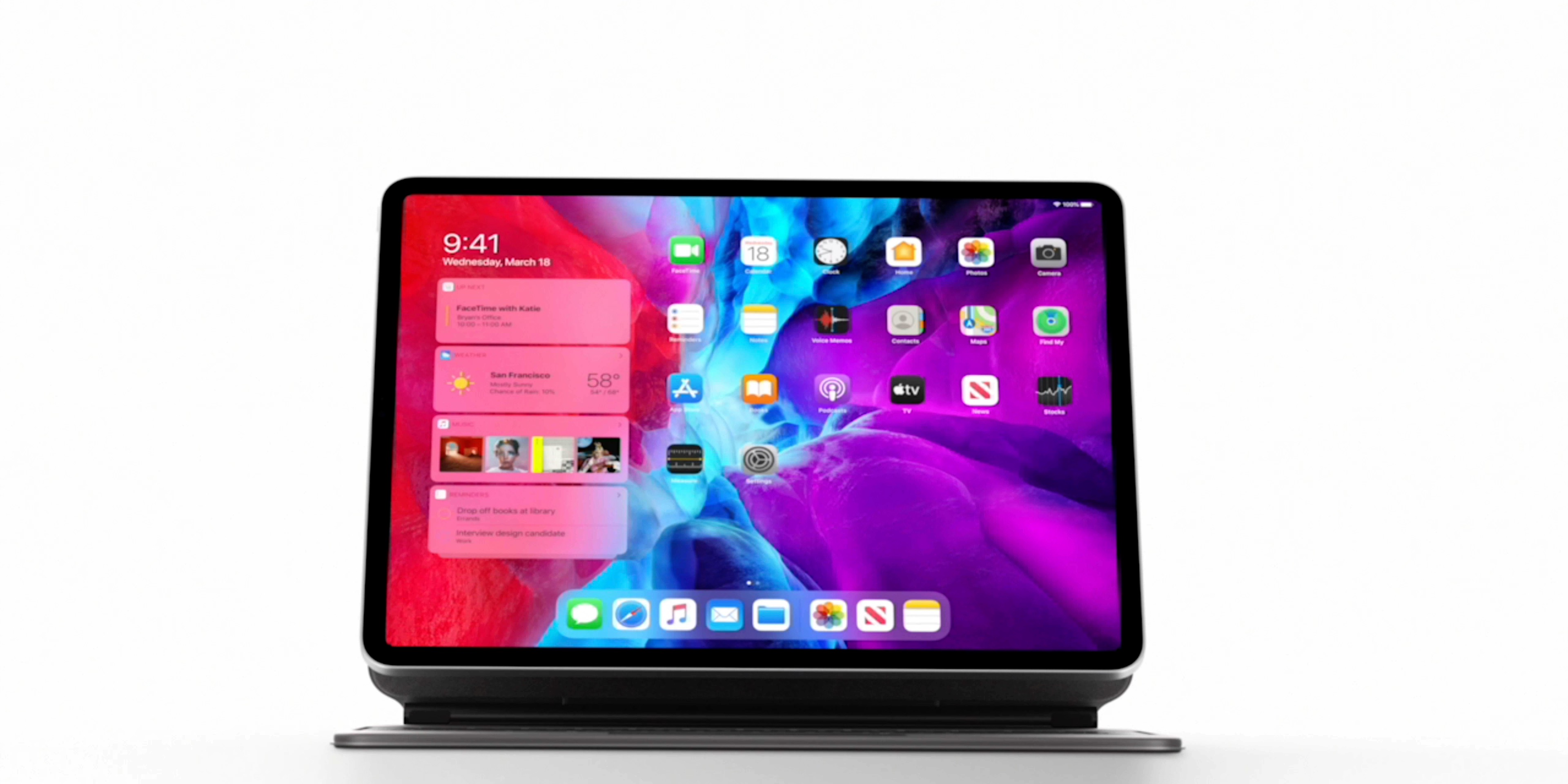 The Magic Keyboard for iPad Pro comes with a new floating cantilever hinge design that allows you to achieve the perfect viewing angle. With your iPad Pro attached magnetically, you’ll be able to adjust to various angles smoothly to meet your needs. 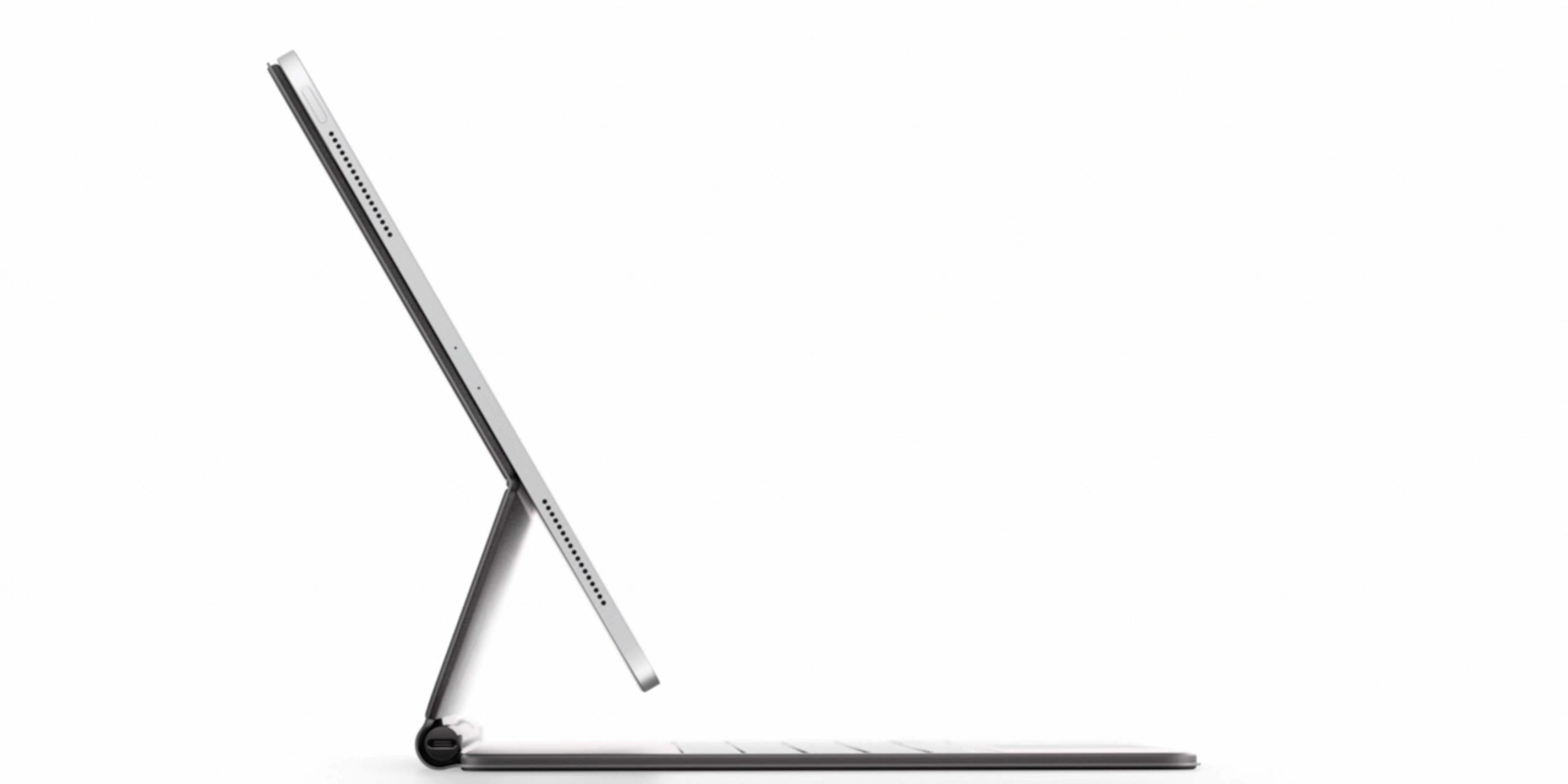 Finally, the Magic Keyboard includes a USB-C port for pass-through charging the iPad Pro. This not only frees up the iPad’s USB-C port for connecting accessories like USB-C hubs and drives, but it also makes it so that you don’t have a power cord dangling from the side of the iPad Pro.

Although I’ve yet to try the Magic Keyboard for iPad Pro myself, just looking at the specs, it’s shaping up to be the most compelling iPad accessory ever. I cannot wait to try it out to see if it lives up to the hype. Will it be good for lap typing? How strong is the hinge? How do the keys and trackpad really feel? Can this really replace a laptop for some people? All of these questions we will answer in our upcoming hands-on coverage.

Just like the 2020 MacBook Air, which featured double the storage in its entry-level model, the iPad Pro follows the same pattern. Instead of just 64GB of storage for the base model 11-inch or 12.9-inch iPad Pro, users are now treated to 128GB for the same starting price of $799/$999. 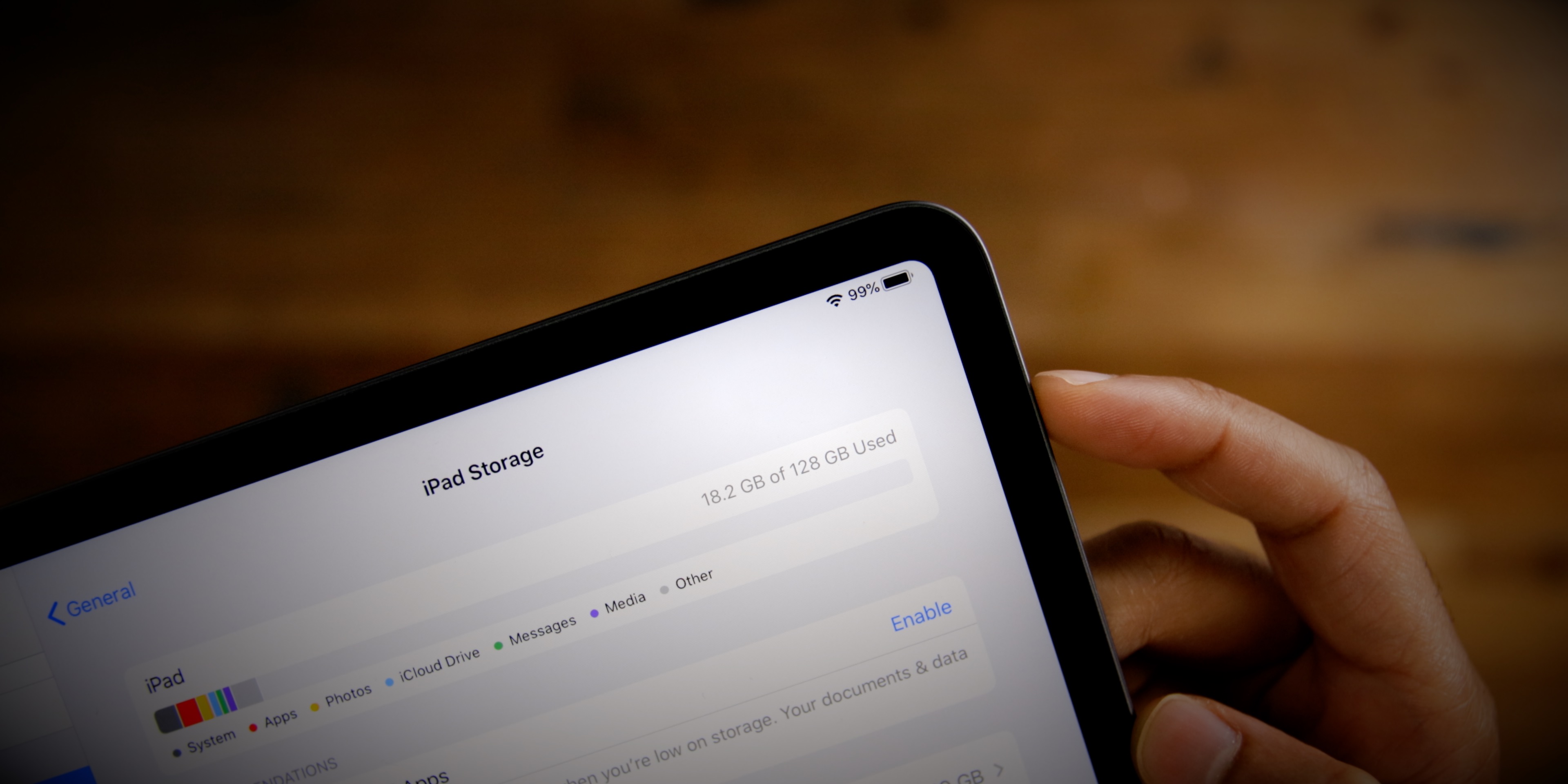 In addition to ditching the 64GB option on the iPad Pro for 2020, the new machine is also $50 cheaper for higher-specced storage configurations across the board. This means that you can score the top of the line 11-inch 1TB WiFi+Cellular version for $1449 instead of $1699. 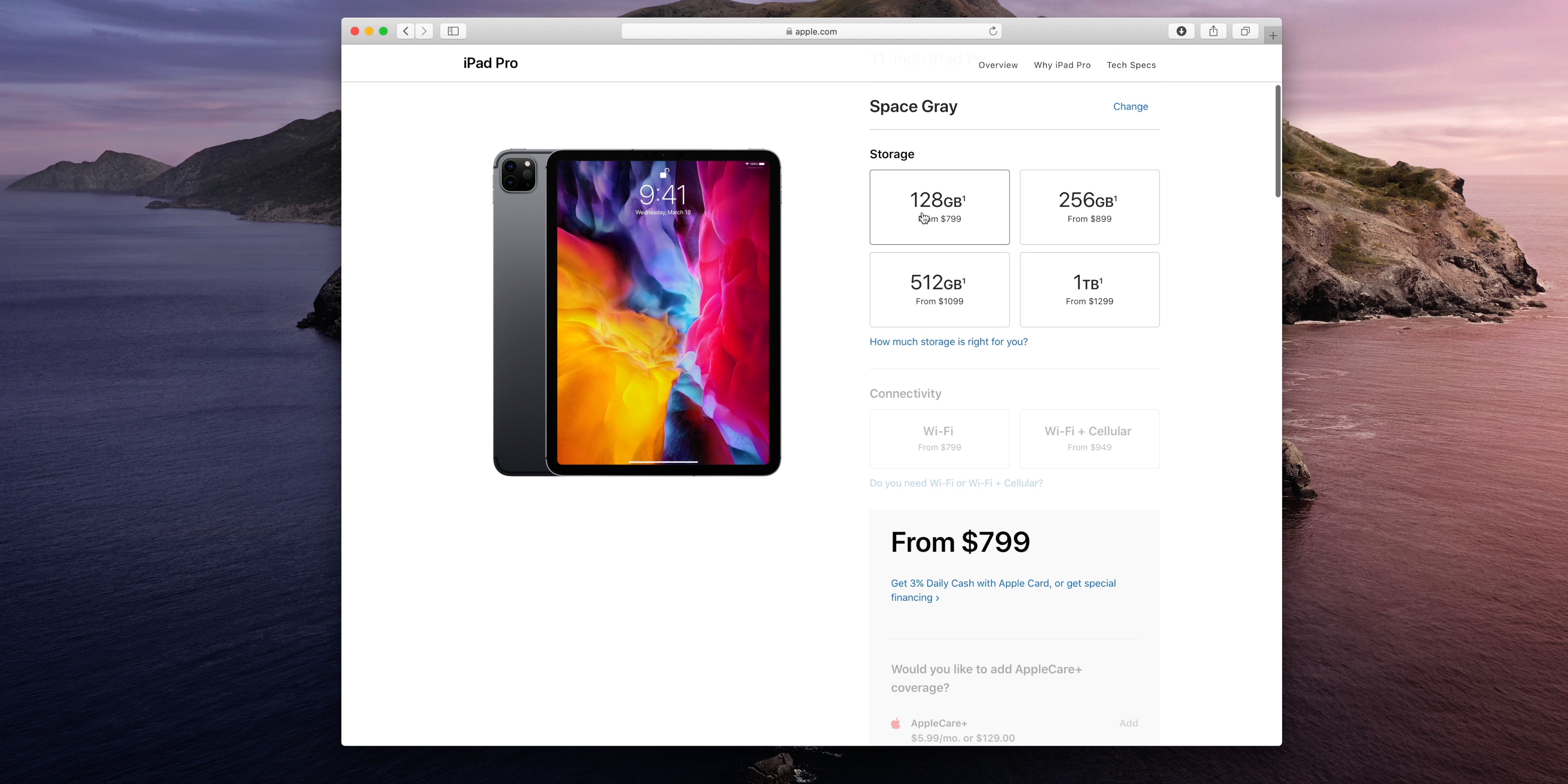 Although there remains an ongoing debate about the usefulness of iPad cameras when compared to iPhone cameras, it’s apparent that there remains a sizable swath of iPad users who like using their tablets as large cameras. 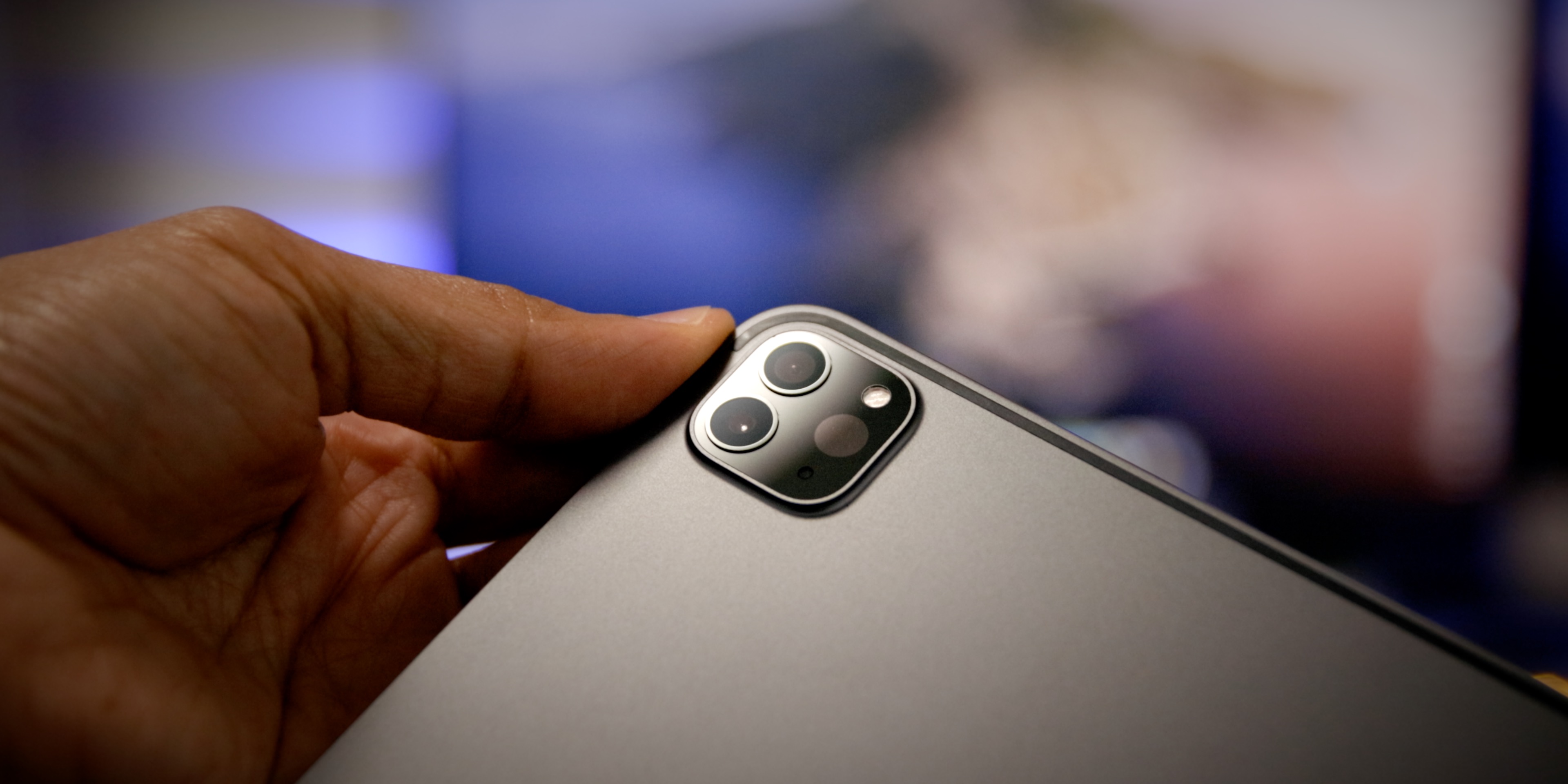 Like the iPhone 11, which sports a dual camera system on the rear with a wide and ultra wide lens, the new iPad Pro takes a similar approach to optics. Featuring a familiar rectangular module on the rear with dual lenses and a brighter True Tone flash, the iPad Pro can shoot both wide and ultra wide shots with a press of a button within the stock Camera app interface. 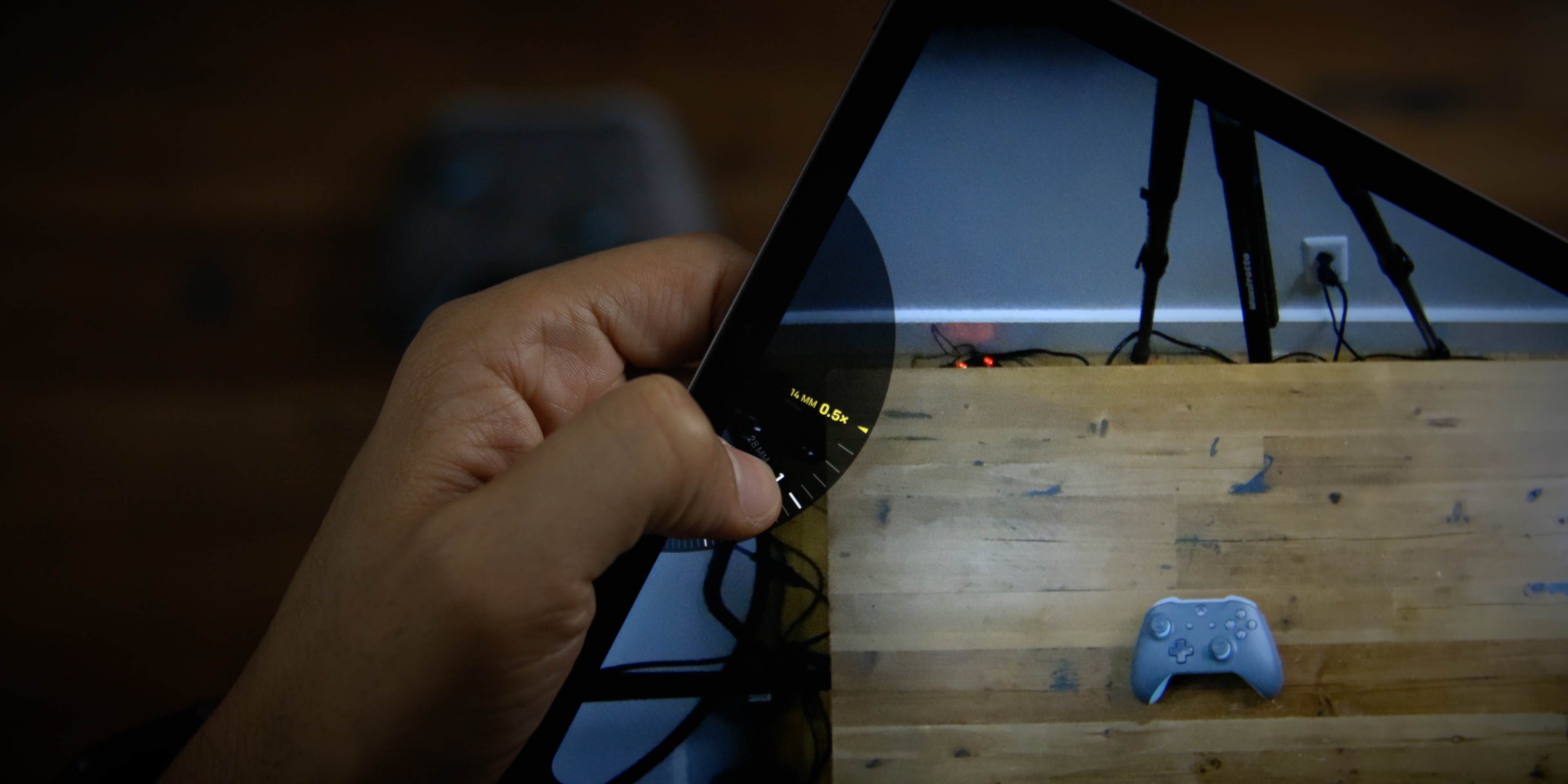 And like the Camera app interface on the iPhone, the iPad Pro software is designed so that the two cameras work together as one. Even though these are two distinct cameras, the software helps blur the lines by mimicking a zoom lens, allowing you to switch between focal lengths within the app as if working with a single lens.

In addition to the new wide angle camera on the iPad Pro, it now includes a new LiDAR Scanner. The LiDAR (Light Detection and Ranging) Scanner uses lasers to help measure distance via light reflectivity. Using direct time of flight to measure reflected light up to 16 feet away in an instant, it results in being able to map out environments quicker than a standalone camera in other iOS hardware. 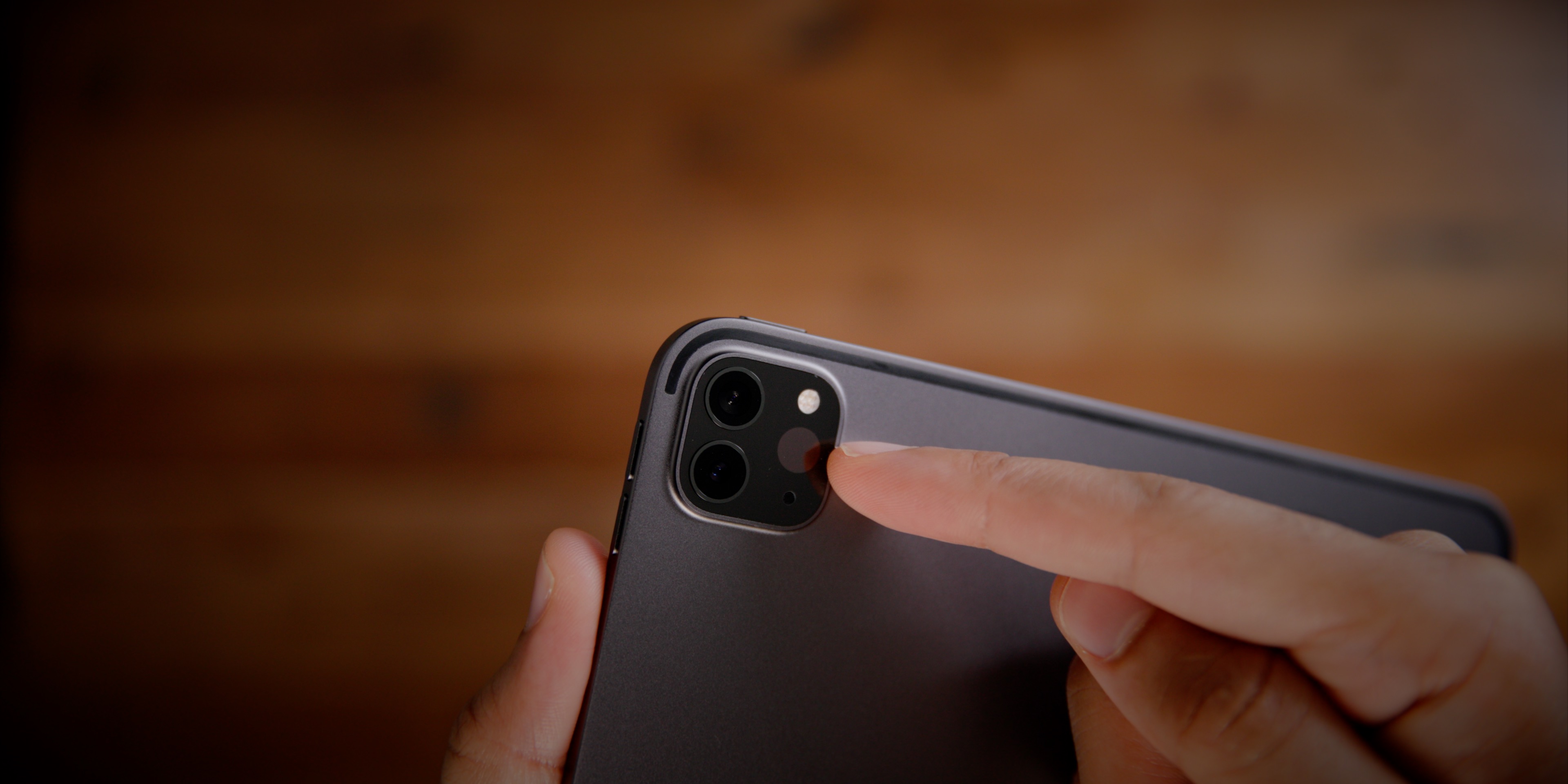 The LiDAR scanner also produces better occlusion results when people or things obstruct AR objects, such as when a person walks in front of a virtual chair, or when there’s an inanimate object placed between your iPad Pro and the virtual plant that you’ve placed on the table. 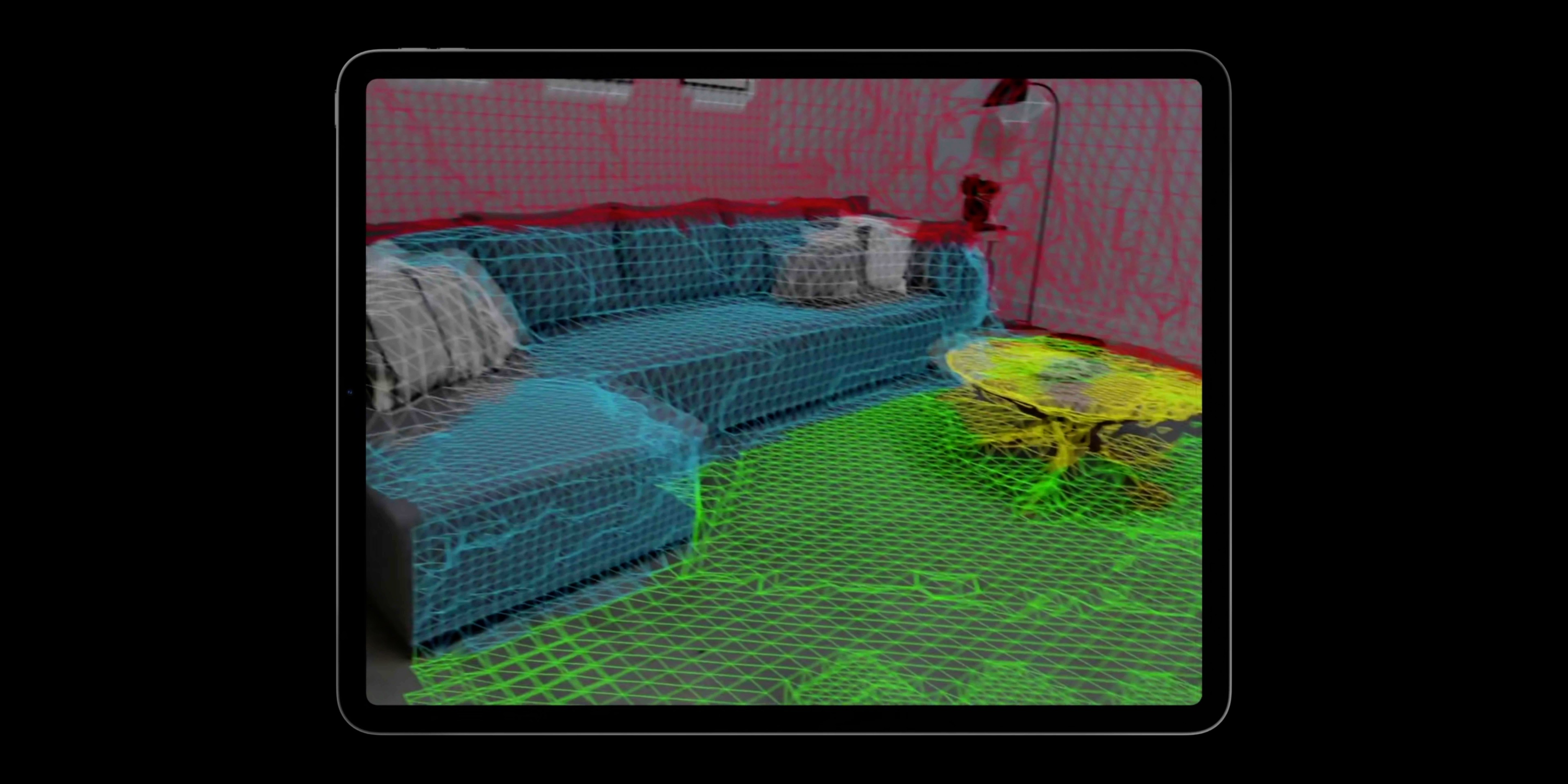 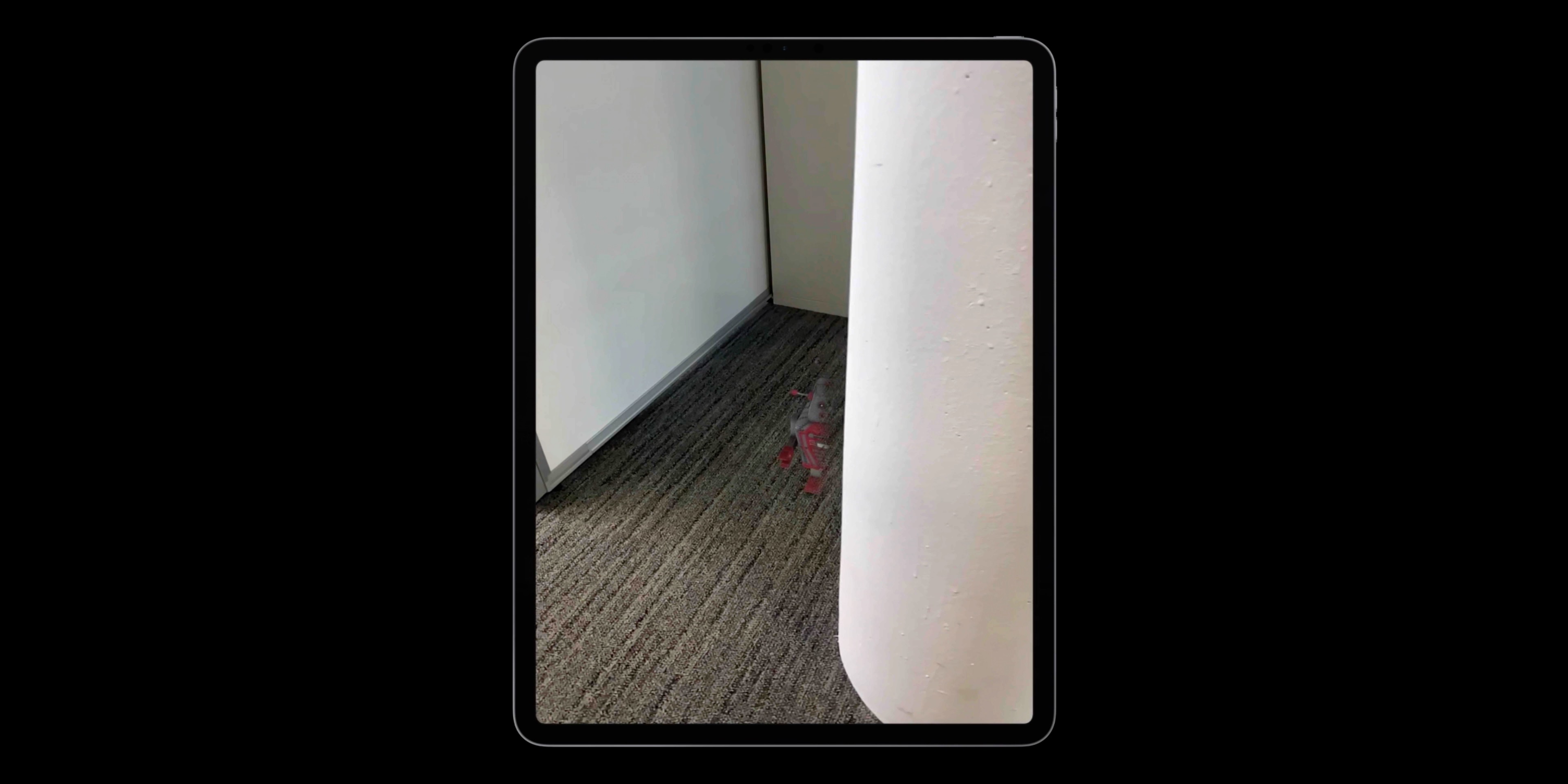 Thanks to the LiDAR Scanner the stock Measure app can now quickly measure the height of a person. It can also quickly recognize and snap to straight angles, along with displaying an augmented ruler on-screen when up close to an object you’re measuring. 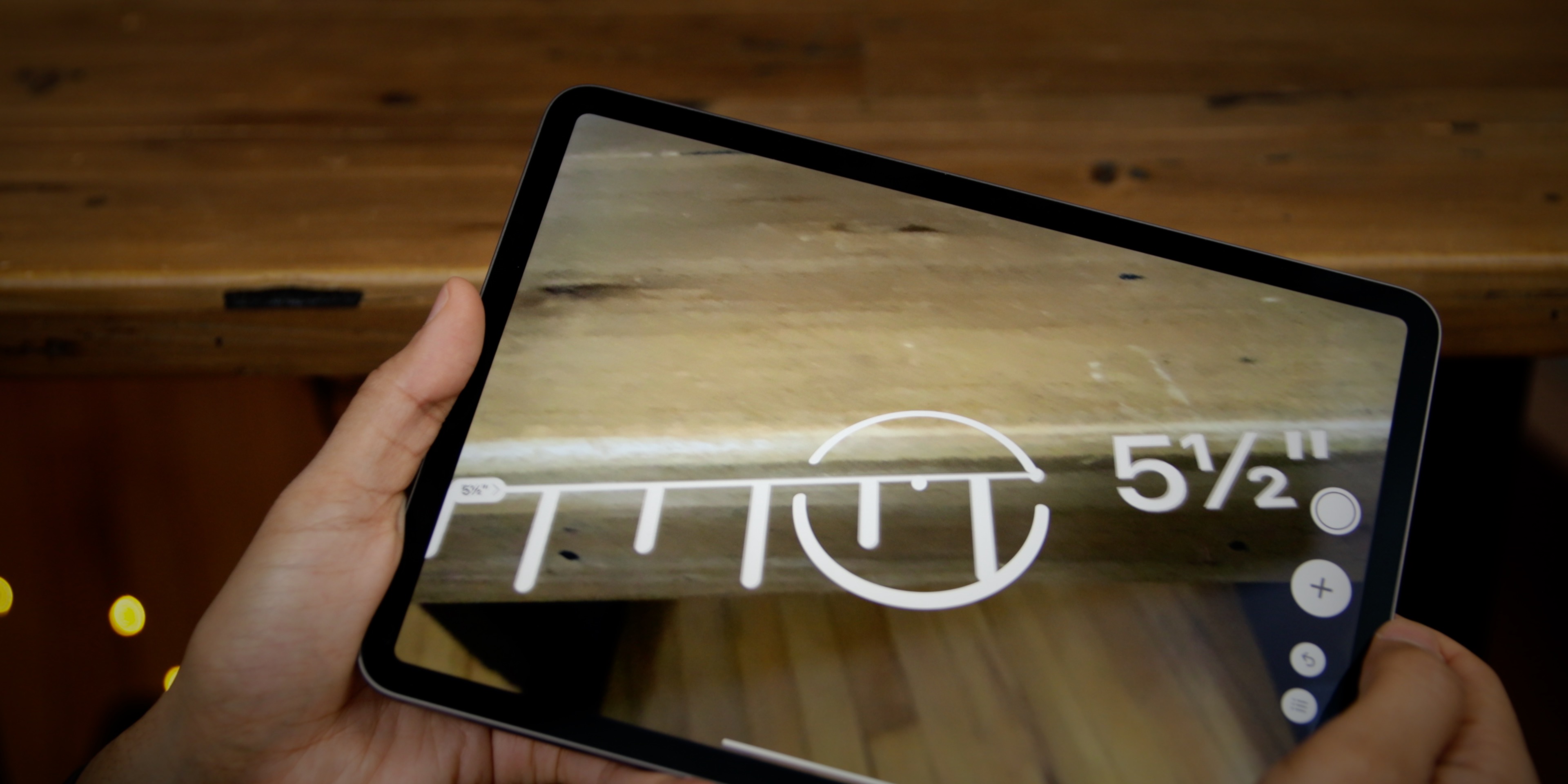 Third-party apps will need to be updated to fully take advantage of the LiDAR Scanner, which is something we hope to be able to explore more by the time of our full review of the 2020 iPad Pro. In the meantime, I highly recommend watching this 10 minute Apple Developer tech talk video, which provides an amazing overview of how the new LiDAR Scanner and ARKit 3.5 enhance augmented reality on iPad Pro. 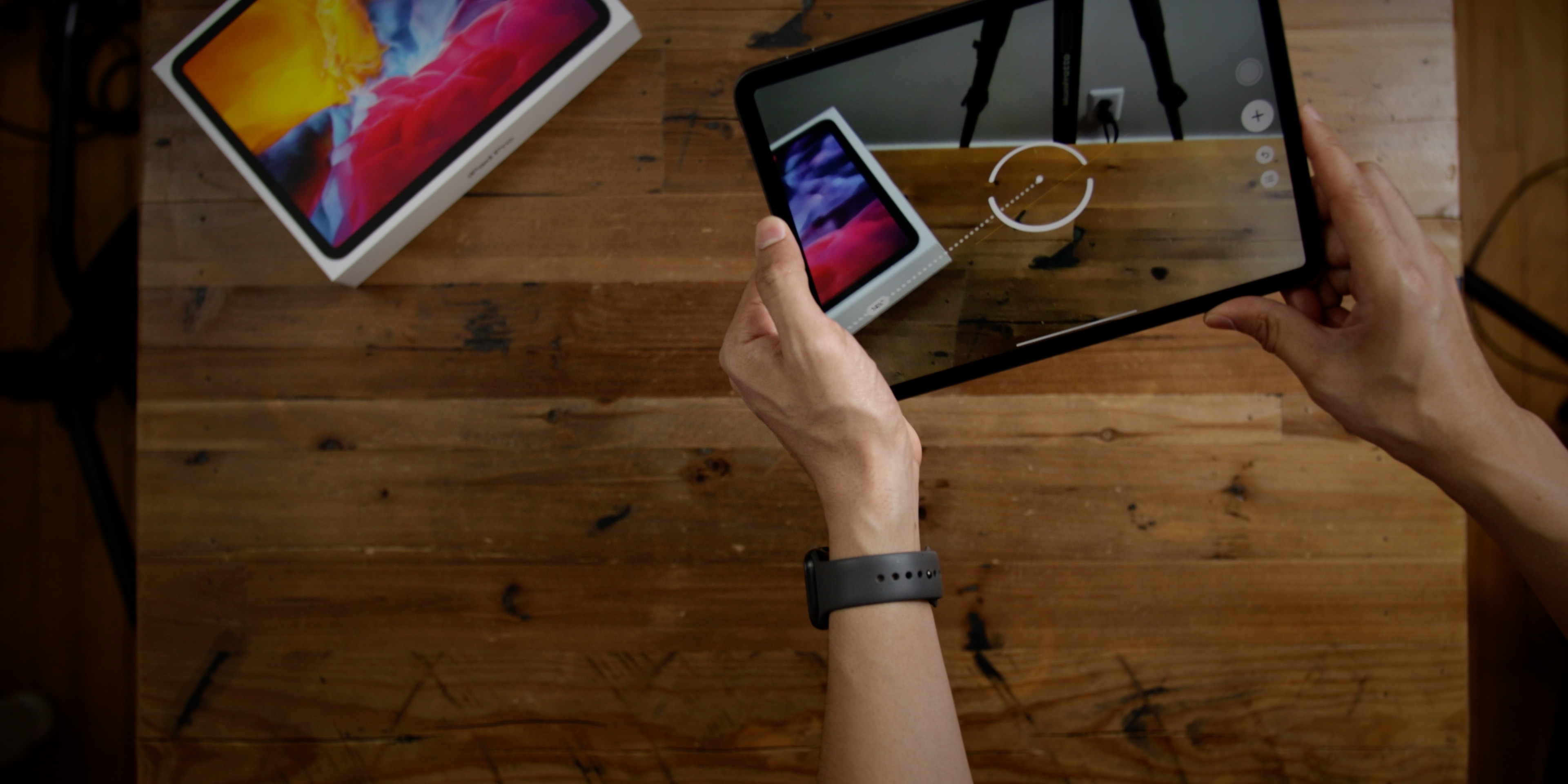 Having 6GB of RAM isn’t new to the iPad Pro, but on previous models, only the highest storage tier and most expensive 1TB iPad Pro featured 6GB; all other models came with just 4GB. With the 2020 iPad Pro refresh, all units, regardless of storage configuration, now include 6GB of RAM. 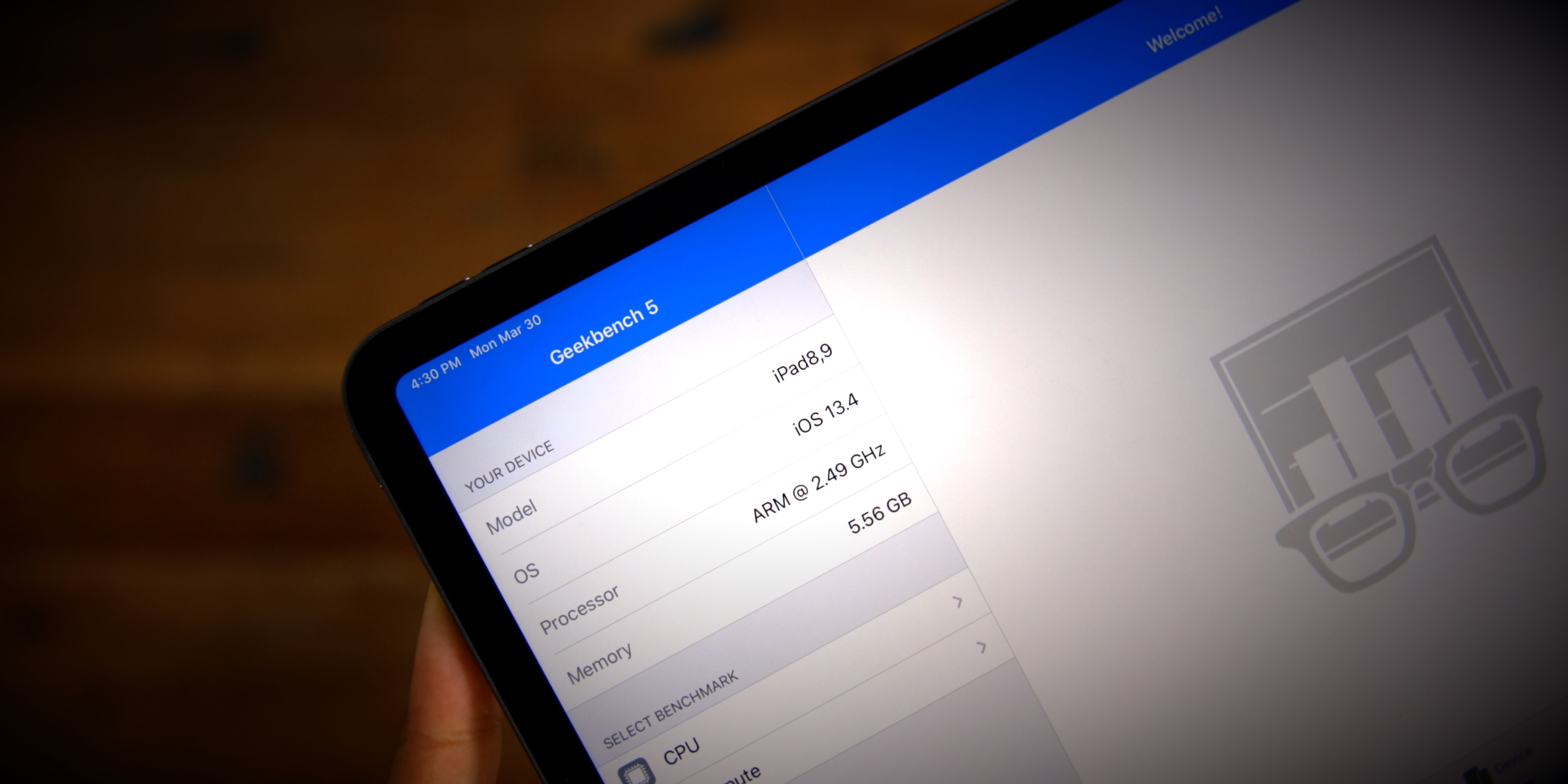 Having this extra RAM will prove beneficial when working with professional apps like Affinity Designer, where you may have multiple art boards and tons of vector assets on screen at once. It’s also useful for multitasking, especially when using professional apps — think Luma Fusion and Procreate — side by side via Split View.

The A12X in the previous iPad Pro, and the A12Z in the 2020 iPad Pro, are essentially the same chips that feature 2.49GHz CPUs. The difference between the two chips has to do with the GPU cores. On the just-released iPad Pro, the GPU has 8 available cores, while the 2018 iPad Pro featured the same 8-core GPU, but only 7 of the cores were available. This new iPad Pro unlocks the 8th core, lending full GPU power to hardware. 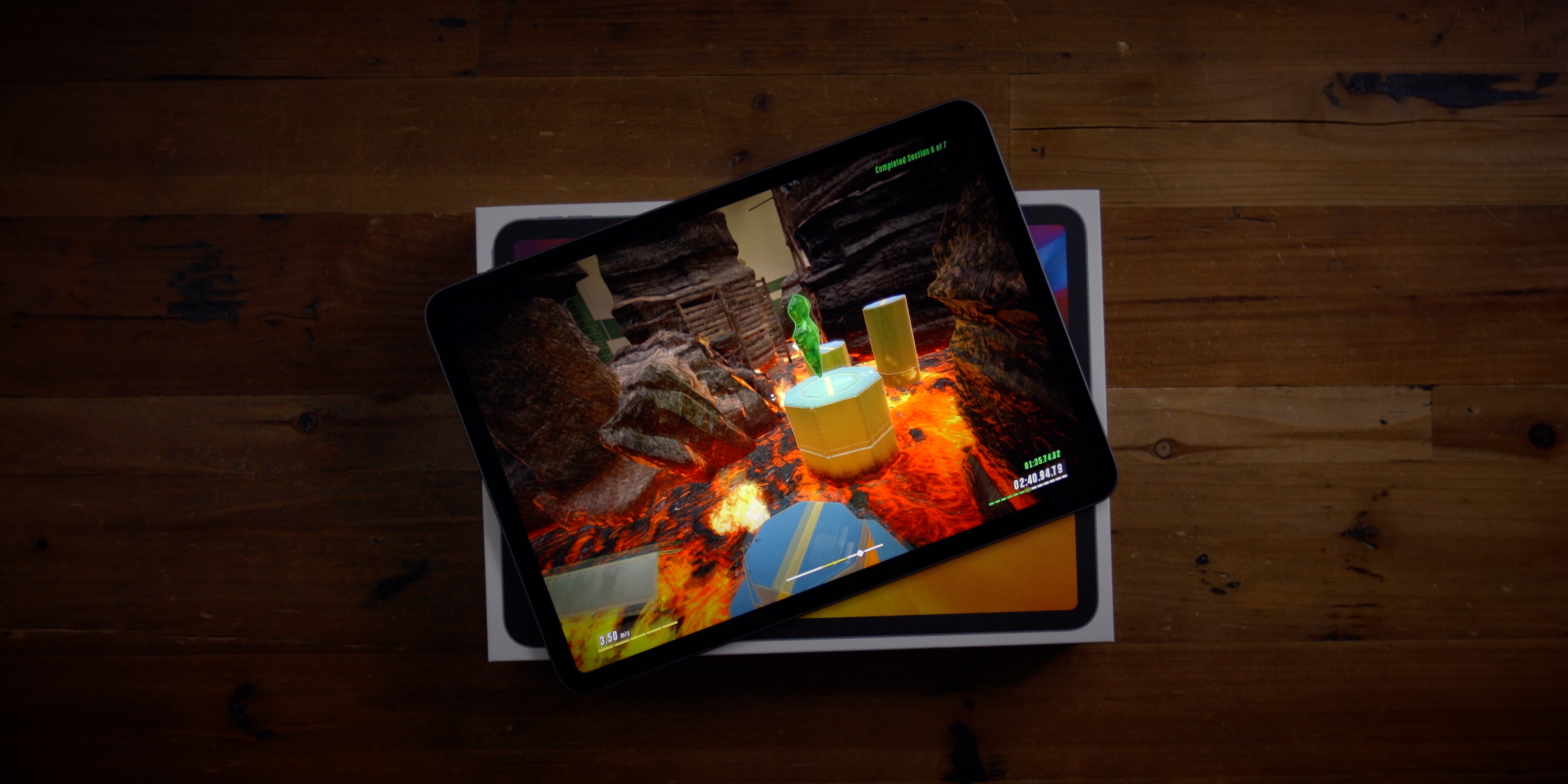 Benchmarks show that there is a difference between the two iPads when it comes to GPU Compute performance, with Metal scores around 1000 points higher on the 2020 iPad Pro. Other than that one difference, the A12X and A12Z seem more or less identical. 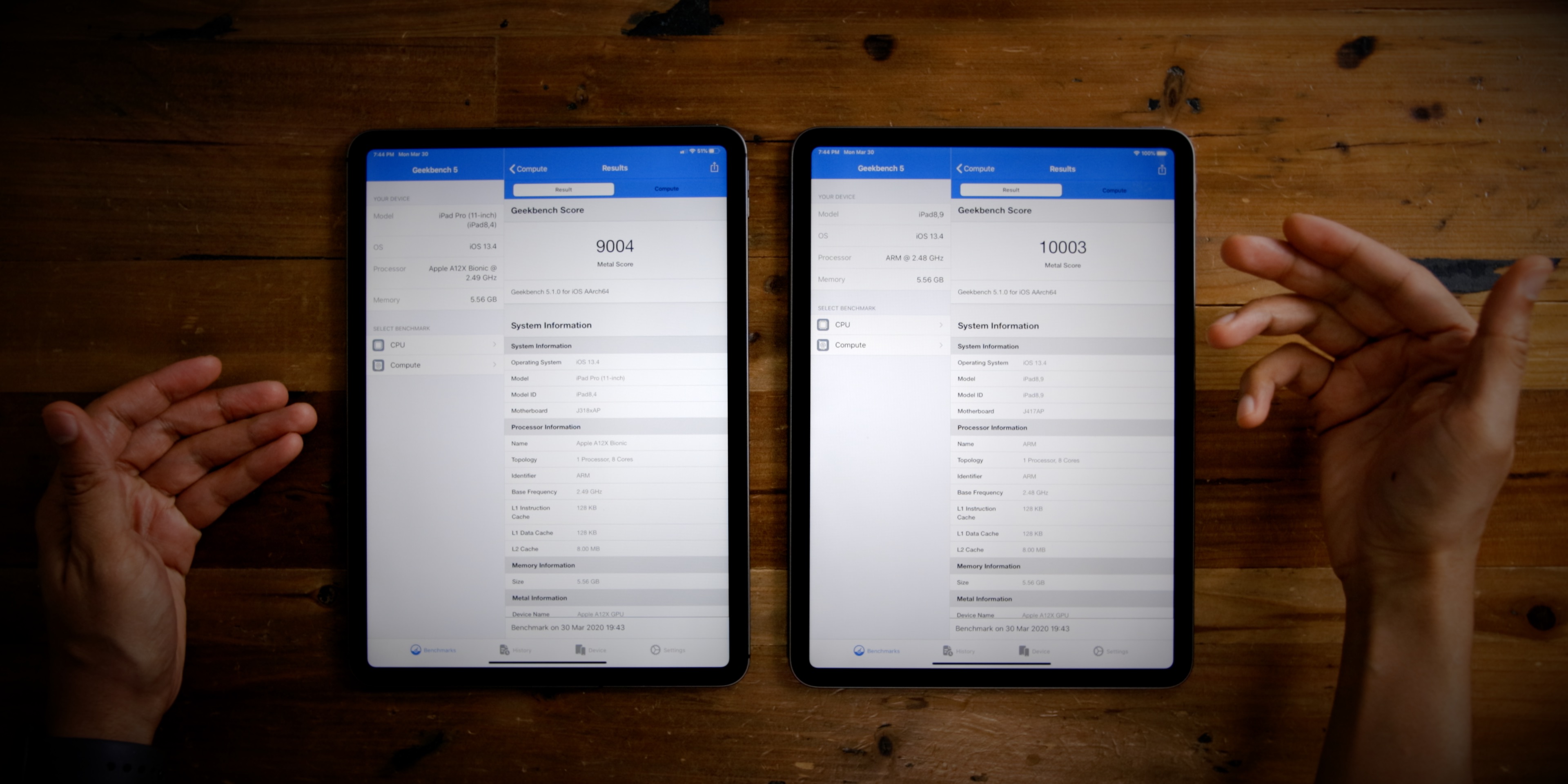 In practice, this difference probably won’t be very noticeable, but it might yield benefits to gamers or those working with complex video editing or graphics applications that tax the GPU. With that said, in my opinion, this upgrade alone is not enough reason to consider moving from a 2018 iPad Pro to the 2020 model. 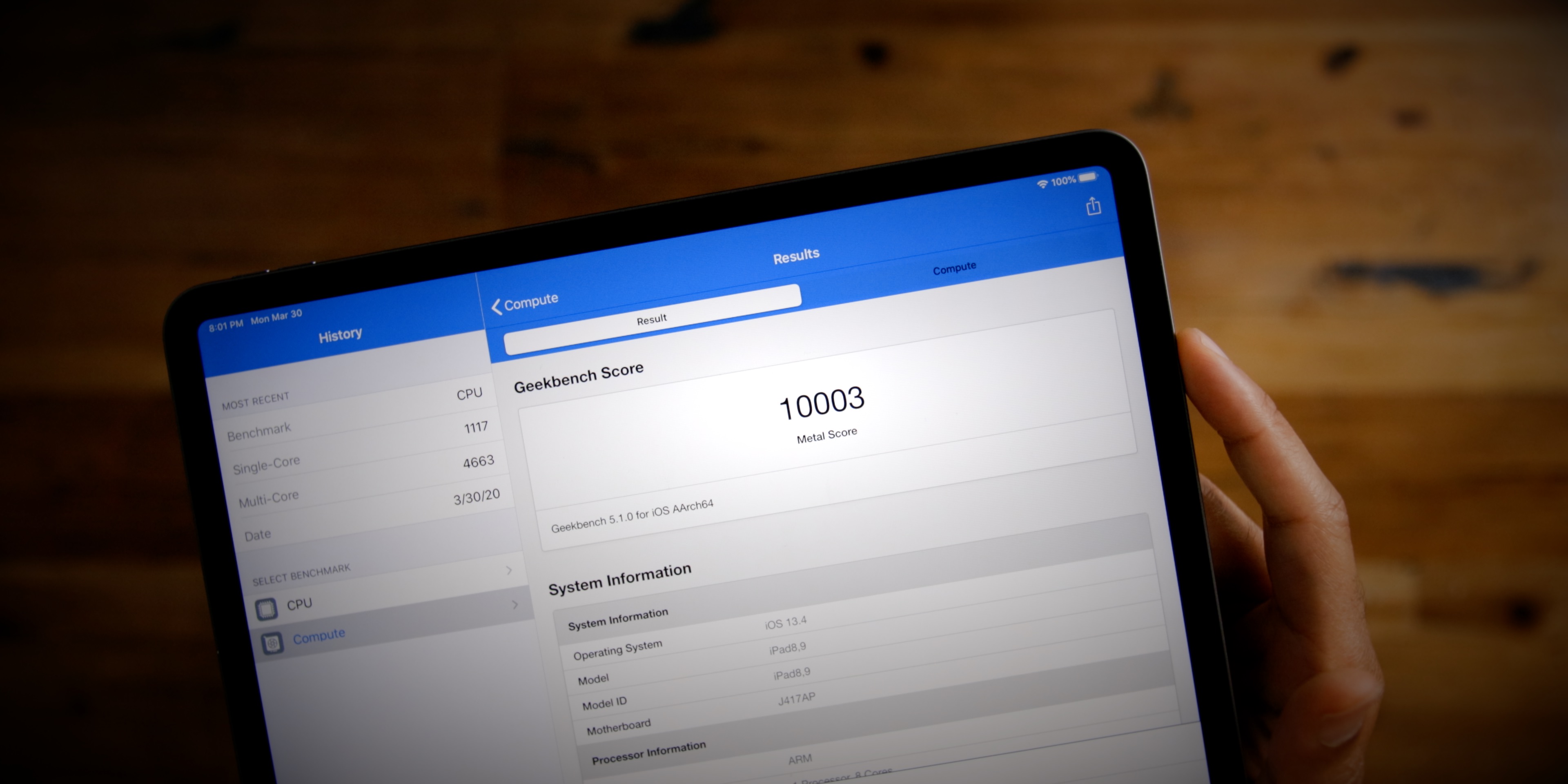 The new iPad Pro is the first iPad to support the new 802.11ax protocol, also known as Wi-Fi 6, following the iPhone 11 lineup’s adoption of the enhanced wireless protocol late last year. If you own a router that supports Wi-Fi 6, then you may be able to tap into the added performance benefits, which perhaps along with a slight speed boost, includes better efficiency when multiple devices are connected to a single network. 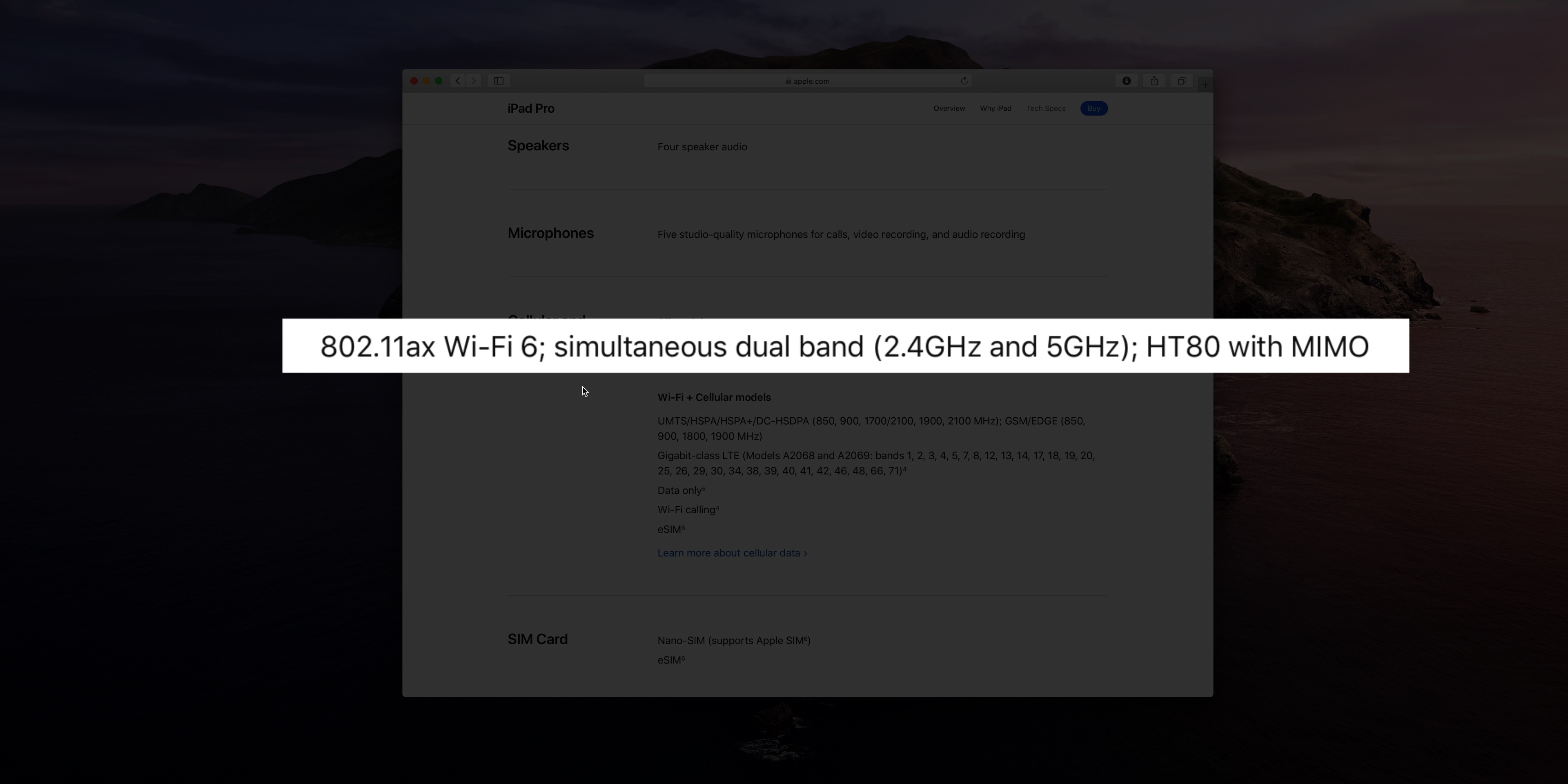 Like all major new iOS device releases, the new iPad Pro includes new wallpapers. On the 2020 iPad Pro there are two different wallpapers with light and dark versions for a total of four. 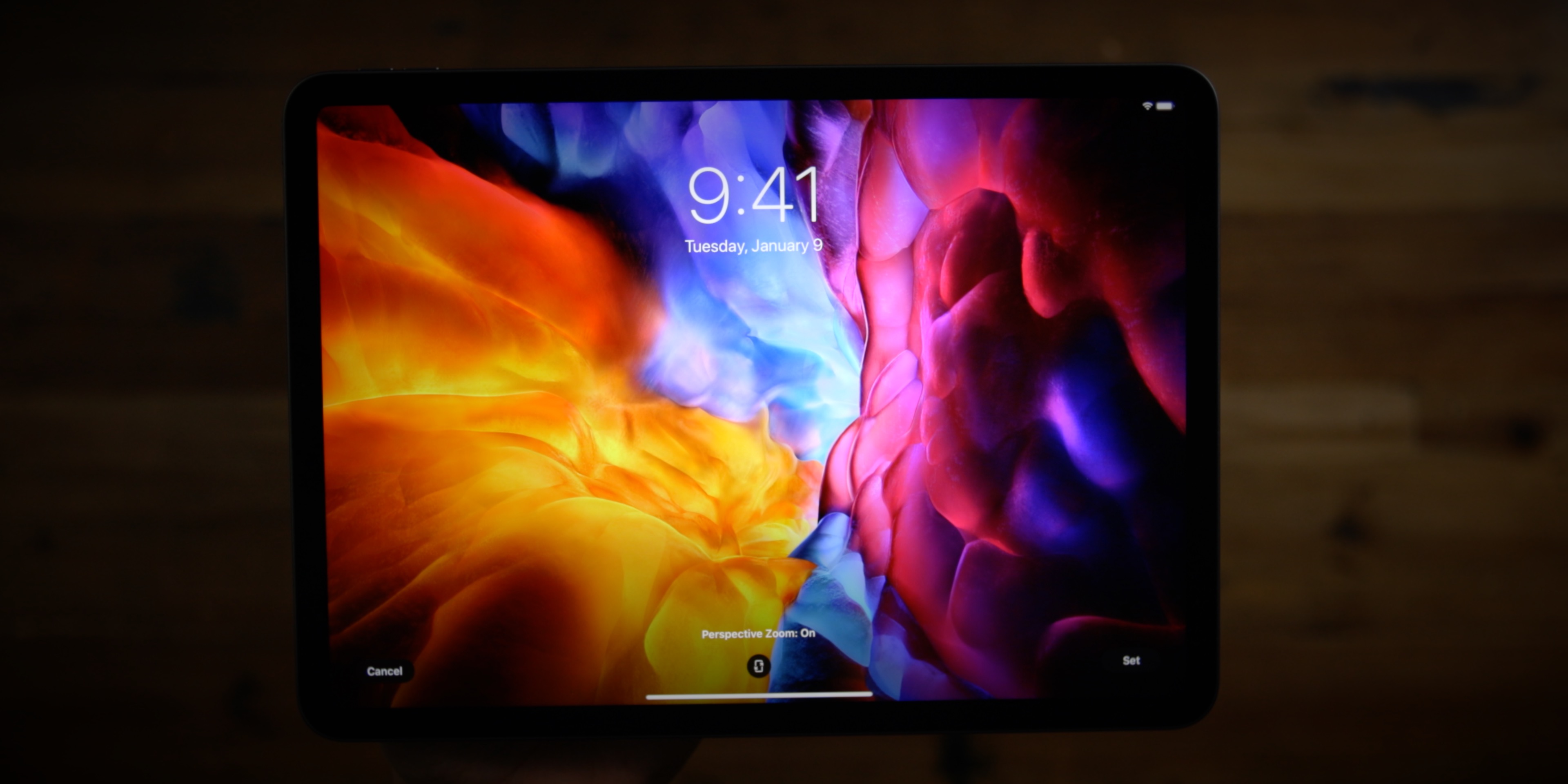 As mentioned at the outset, one of the biggest new iPad Pro changes isn’t a new hardware feature, but a significant software enhancement. iPadOS 13.4 brings enhanced mouse and trackpad cursor support and gestures to the iPad for the first time.

If you already own the 2018 version of the iPad Pro, then there’s really no pressing reason to upgrade to the latest-generation model. However, if you’re coming from an older iPad, it might make sense to go with the 2020 iPad Pro over a used or clearance 2018 model. 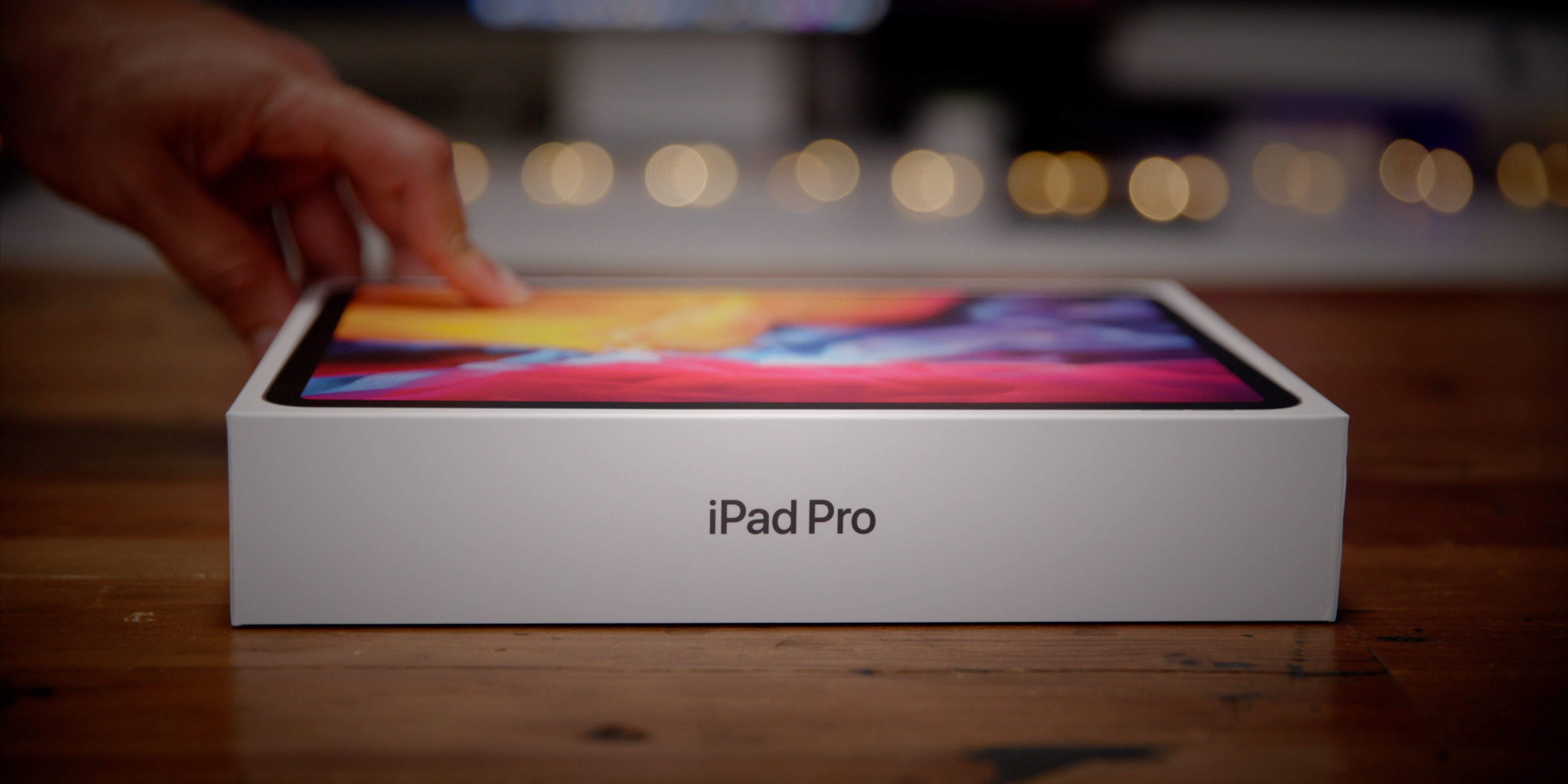 Yet, if you can find the 2018 iPad Pro significantly cheaper than the 2020 model, it might be best to save your money and go with that. And since the Magic Keyboard will work with either model, there’s no reason to upgrade from the 2018 version if you’re primarily interested in Apple’s upcoming keyboard accessory. 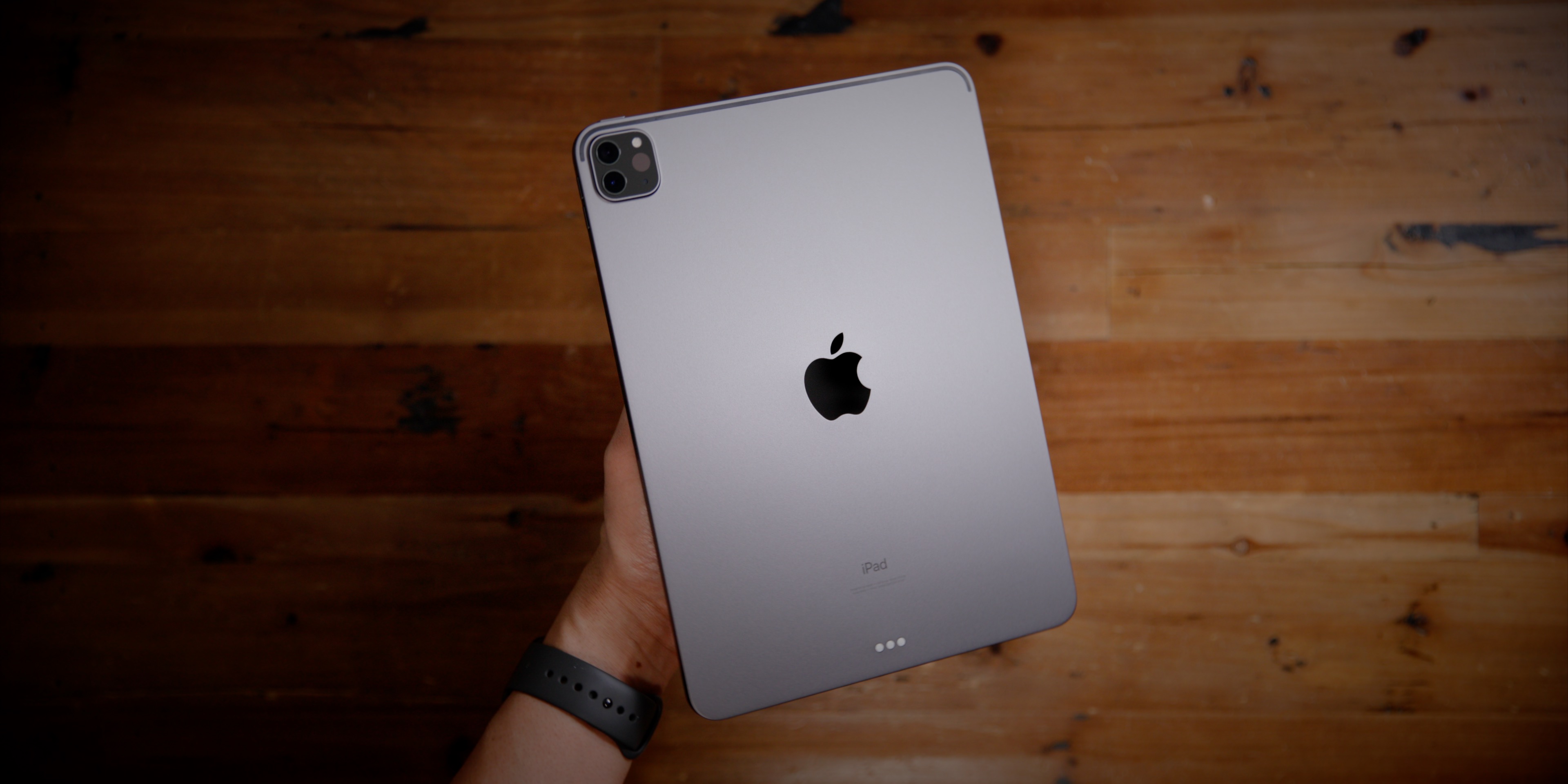 We’ll be back with a full review of the 2020 iPad Pro along with in-depth coverage of the Magic Trackpad for iPad Pro soon. In the meantime, what are your thoughts about such an incremental upgrade? Do you think this iPad is providing us with a preview of Apple’s big AR ambitions? Sound off in the comments below with your thoughts on Apple’s new iPad Pro hardware.