Universal Audio’s new LUNA recording platform is now available for free to all of its Thunderbolt-interface owners. The highly anticipated new recording environment is looking to rival industry heavyweights like our beloved Logic Pro X, Pro Tools, Live 10, and others with a tightly-integrated hardware/software system and its powerhouse stable of analog processing emulations. Universal Audio has been responsible for some of the recording industry’s most prolific audio processing units since the 1950’s — a trend that continues to this day with its professional audio interfaces and best-in-class DSP-based virtual FX units for audio professionals. Head below for our hands-on first impressions.

At first glance, LUNA presents a clean and easily understandable working environment that any Logic Pro X or Pro Tools user should be able to acclimatize to with relative ease. In fact, the whole thing feels even more minimal than I initially expected, offering up just the most important elements of creating tracks, recording audio/MIDI passages, and mixing, until you need to dig in a bit deeper. As expected, all of the staple elements you would find in other professional DAW environments are present and accounted for, and considering you’ll already need to be a UA Console app user to some degree because you own the LUNA-required Thunderbolt interface, you’ll be right at home with the look and general layout of everything for the most part. The Monitor section that defaults to the right-hand panel of the main UI, for example, is essentially identical in both form and function to the UA Console, with this trend running throughout the experience.

Quick side note: You really don’t even need to use the UA Console app on your Mac when LUNA is running as it essentially takes over and offers up all of the same features (and then some), like the Monitor section mentioned above. However, UA does offer a number of options to customize this experience for pros with Console-specific setups and the like. Users can still use Console for live inputs if they choose, for example, among other things like Unison setups, persistent channel settings LUNA won’t get in the way of, and more. 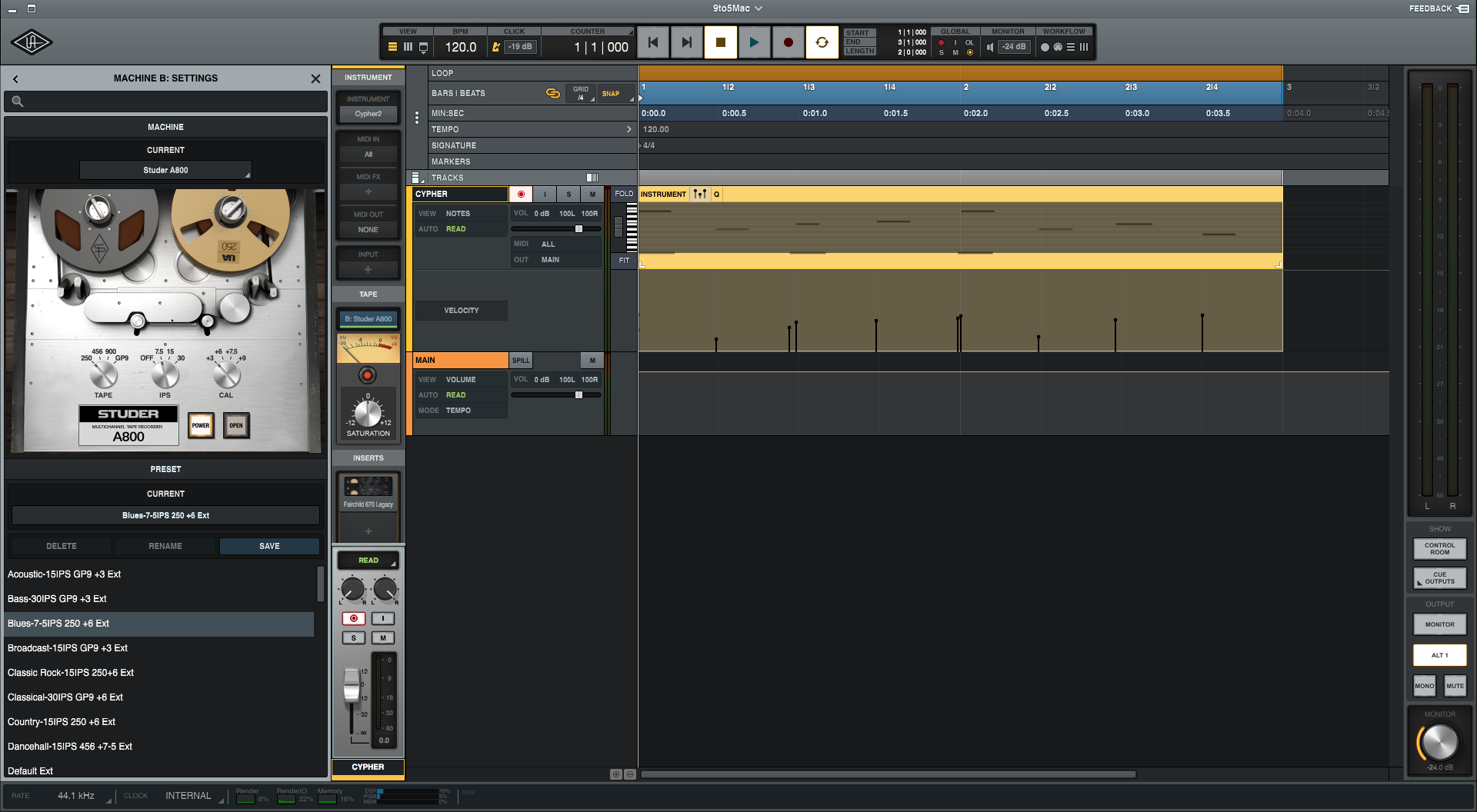 From creating new audio, MIDI, and bus tracks to navigating the expandable-view Mixer channel strips, and actually laying parts down, LUNA just works and does it with the grace you would expect from a Universal Audio product. While not unheard of, the customizable nature of each viewable element on the channel strip, accompanied by the inline tape FX controls and full-size Send faders, makes for a particularly unusable and pleasant to look at Mixer environment. 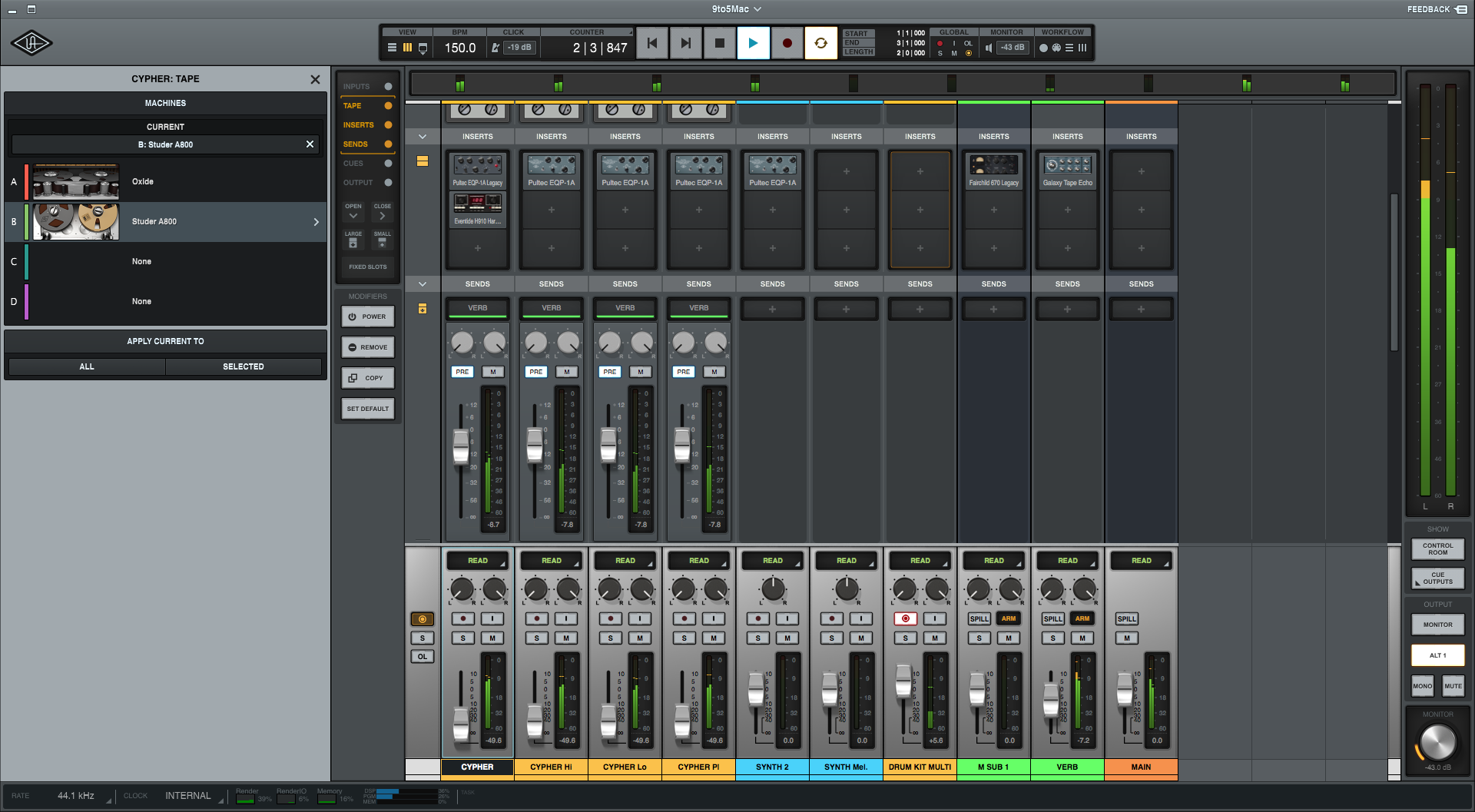 Editing, menu navigation for deeper functionality, and some of the shortcut keys were a little bit more of a learning curve for me, but there’s nothing overly cumbersome here that didn’t become near-second nature within the first extended sit down with the software. Some of the overall logistics and layout of this stuff feels like it mirrors the Pro Tools framework more so than Logic’s, which might be an intelligent move considering what appears to be a clear focus on higher-end and authenticity-driven audio professionals.

Admittedly a life-long Logic user, I have to say I have been impressed with the usability and general immediacy of UA’s new DAW experience thus far. Pro Tools or LUNA? Ableton Live vs. LUNA? Is LUNA better than Logic Pro X? Well, I’m clearly not the one to be asking that question to but it is certainly a very capable recording environment that houses some of the best (and most expensive) gear on the planet. Your entire existing collection of Audio Units (FX and instruments) from third-parties are right at home here and the platform is the exclusive home to the new UA add-ons known as LUNA Extensions — arguably the most exciting element of LUNA for many users since the second it was unveiled back in January and right up until it launched some three days ago. It almost felt like if they could just nail all of the staple elements of recording software as good as LPX and Pro Tools (and let’s face it, this is UA so they probably will), the no-latency UAD to tape recording, plus integrated Multitrack Tape, and built-in Neve summing could be a real game changer for many pros. 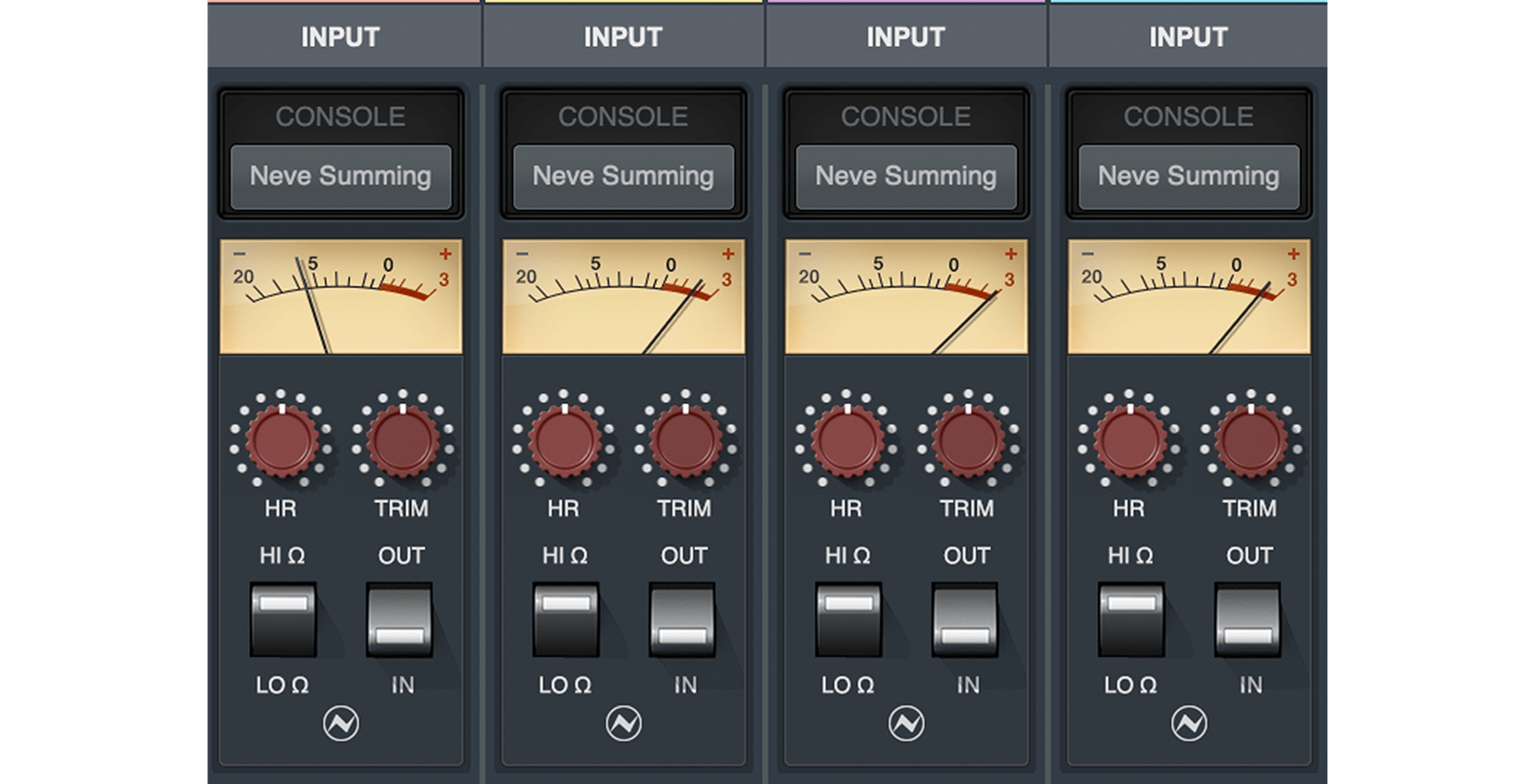 Ever since the curtain was lifted on the new LUNA recording software, producers and music makers everywhere were intrigued by the new Integrated Multitrack Tape FX and “built-in” Neve Summing Extensions. Similar to a plug-in, Extensions take the form of additional, highly-integrated processing/FX units that are exclusive to LUNA, much like we all expected. UA has painstakingly emulated the “entire summing circuit of an iconic Neve 80 series console — including its coveted 1272 bus amplifiers — giving your LUNA mixes all the color of Neve’s most cherished analog desk.”

This “effect” can be loaded up on your Master output or sub groups/Aux tracks to add that special Neve magic to your recordings. I tried to be as skeptical as humanly possible here going in, almost hoping I couldn’t tell the difference for some reason, but it sounds absolutely fantastic. Subtle at times, it’s night and day at others and could make a massive difference on any mix desk from movies and games, to voice-overs and records. Obviously you’ll need to give the whole thing a try for yourself if these A/B comparisons won’t cut it for you, but to my ears, it’s worth every penny you didn’t know you were going to have to pay for it. 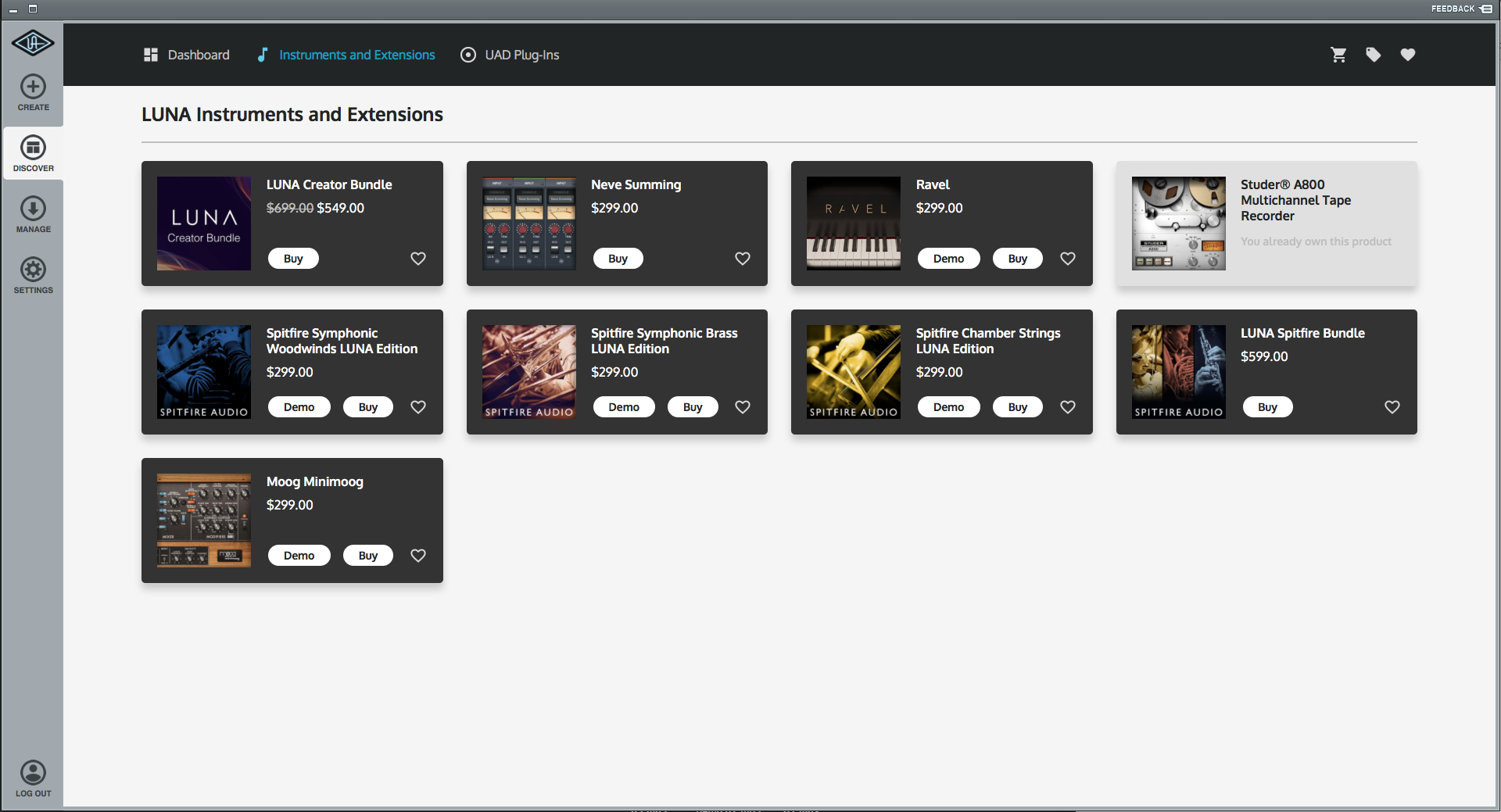 Maybe I missed it along the way, or was just so excited about creating my very own Neve submix console, but Neve Summing is not included in the LUNA recording platform. It, like the rest of the company’s Audio Unit plug-ins, will cost you a pretty penny if you want to use it for more than the 14-day free trial. The Neve Summing Extension, along with the LUNA-exclusive Moog Minimoog software instrument can be purchased in the digital storefront UA houses on the lander page tabs you see when you boot-up LUNA. Neve Summing and the LUNA Minimoog instrument carry a $299 price tag, each. Other exclusive LUNA instruments include some Spitfire Audio orchestral packs and the highly-advertised Ravel studio grand piano sampler instrument, all of which also coming in at $299 a pop.

LUNA includes one of the two Integrated Multitrack Tape Extensions known as Oxide (The Studer A800 Tape plug-in/Extension will run you an extra $349), the ARP LUNA Extension (MIDI arpeggiation FX for Instrument tracks), and the Shape software instrument for free (a 3+ GB collection of “vintage keys, drums/percussion, guitar/bass, orchestral content, and real time synthesis” from some serious engineers like Spitfire Audio). Other than that, everything else — FX, software instruments, etc. — all must be purchased through the UA shop or elsewhere. While just about all of your third-party Audio Units will work in LUNA, the only other gear available to you is stuff that came with your UA interface/you already own, as far as I can tell. 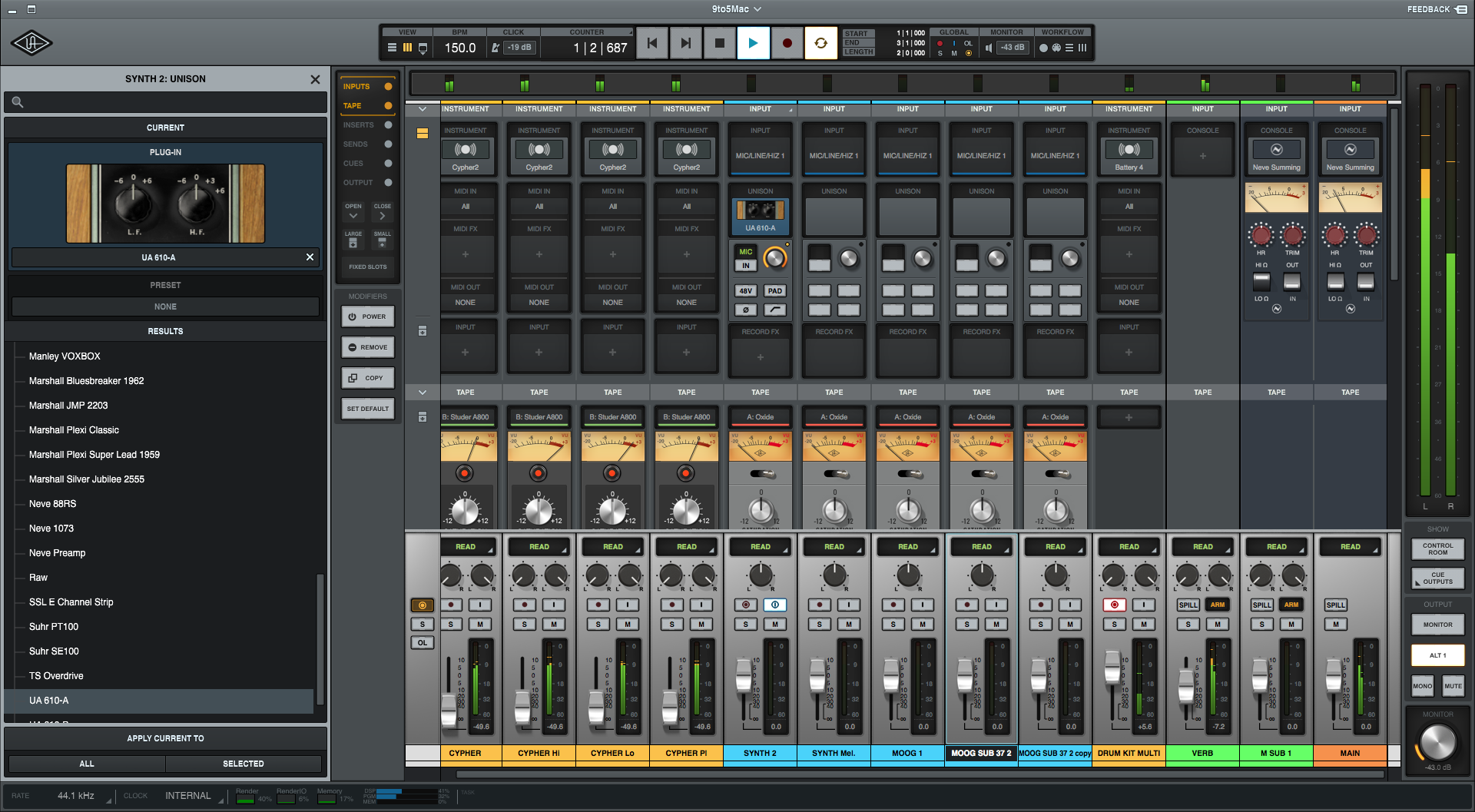 Universal Audio is once again flexing its analog prowess in the next chapter of its virtual-analog journey. It’s almost impossible to imagine a company with its pedigree releasing a sub-par product and so far, the LUNA recording environment appears to be just about everything you could want from from a UA DAW.

But for some, the “free” LUNA recording platform just got a whole lot more expensive. For me, the whole reason to jump in to a brand new DAW after 15+ years of holy matrimony (Logic and I have been together since before Apple came into the picture), would be some killer, and aggressively exclusive new feature like Neve Summing and the UA Extensions overall. So the $299 price tag on some of the add-ons is certainly going to sting for some and leave others wishing it wasn’t locked down to UA’s new recording environment.

Having said that, LUNA is for people who have already spent or were already going to spend a small fortune on a Thunderbolt-equipped Universal Audio interface — the Arrow starts at $499 (hands-on review right here) with pro Apollo machines going for as much as $3,700 and up. From this perspective, you’re essentially getting a completely free, fully-featured DAW for a device you were going to buy anyway for use with Logic Pro or Pro Tools. Yes, you have to then buy all the amazing gear to use with it, but you were already going to have to do that with your Arrow/Apollo Logic/Pro Tools setup too. Just about anyone purchasing Thunderbolt UA interfaces did so in order to gain access to its particularly pricey and seriously amazing proprietary plug-ins, and the Extensions like Neve Summing are essentially the same thing.

As a die-hard UA interface-Logic Pro X user, the only real shame here is that Neve Summing is exclusive to LUNA and I can’t drop the $299 (wait for a sale, there’s lots of them) to use inside of all my Logic Pro X projects until the end of time. But for recording engineers, mixers, and mastering professionals already heavily invested in UAD plug-ins and the like, LUNA presents a clear and present danger for your existing DAW, especially if you were already a UA Console app Jedi.

Exploring some options for making use of LUNA’s most exciting gear/ features with Logic Pro X projects does have me intrigued though. Loading Logic projects in LUNA via AAF or making use of some kind of inter-system routing could lead to some interesting cross-platform collaborations. Stay locked to Logic Pros and 9to5Mac in the coming weeks for more on LUNA and let us know in the comments below if you’ve had a chance to dive in to UA’s new recording platform yet.