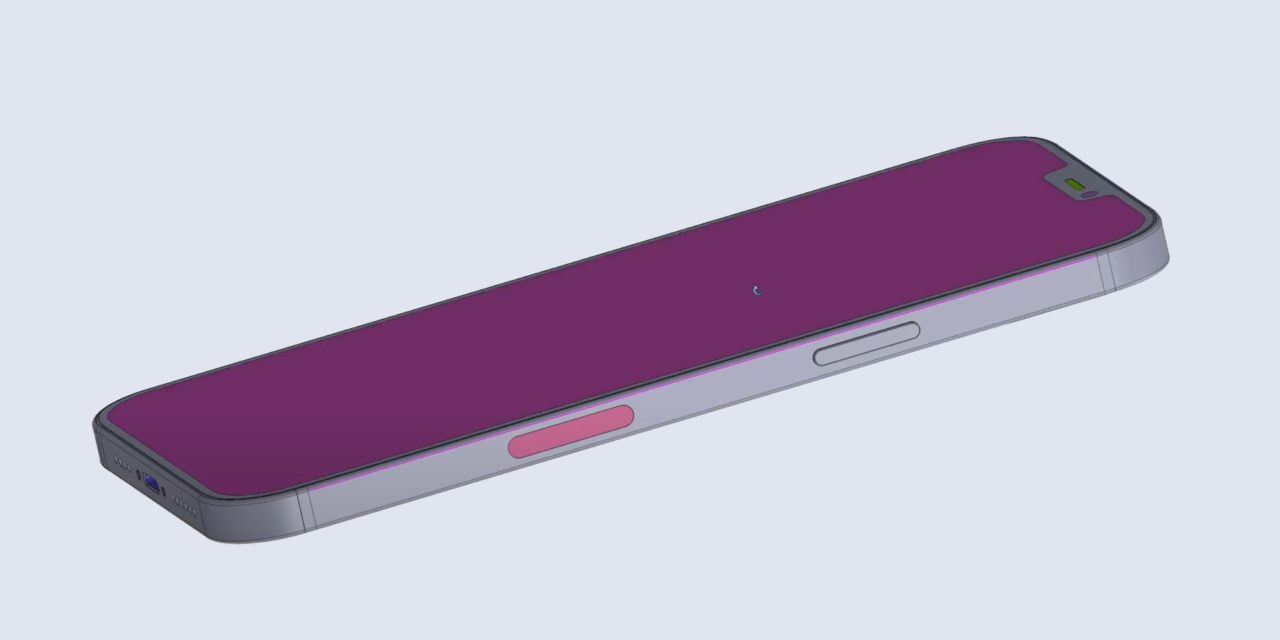 Seemingly-reliable schematics for the upcoming iPhone 12 Pro Max sourced by Max Weinbach are featured in EverythingApplePro’s latest YouTube video. The key takeaways reflect what we already knew: the new iPhone is going to share a lot of design aesthetics from the iPad Pro.

As always, the devil is in the details. The CADs show the squared-off flat side finish we’ve been expecting, but confirms the previously leaked size specifications. The schematics suggest the phone will get thinner compared to the iPhone 11 Pro Max, from 8.1 mm down to 7.4 mm.

iPhone CAD schematics generally leak in the spring ahead of the product’s launch, as accessory manufacturers race to prepare their manufacturing lines to have cases ready for the new iPhone launch. This CAD was likely leaked out of a Foxconn factory and sold on to a casemaker. It appears to originate from January of this year. As the iPhone 12 is still in the late prototype stage, some details may still change as Apple finalizes production.

This phone will feature a 6.7-inch OLED display, up from 6.5-inch in the iPhone 11 Pro Max. The overall phone is getting slightly wider and taller to accommodate the extra screen but the most striking change is the difference in screen bezel thickness. The size of the bezels is shrinking by about 40% on all four sides, from 2.5 mm to 1.5 mm. This increases the device’s overall screen-to-body ratio and should look very modern.

The current iPhone camera protrusion has a pronounced tiered design, with the cameras raised above a smaller bump. The iPhone 12 camera bump design will transition to having the bump itself be thicker, meaning the cameras do not stick out as much from the bump. The overall size of the total protrusion is about the same but — as previously mentioned — the body is thinner.

Of course, the camera layout will also be changed to fit a fourth camera sensor — the LiDAR scanner. The layout matches what we saw previously in iconography, with a symmetric 2×2 matrix of holes. Each of the camera lenses will also be getting slightly larger in diameter, suggesting physical hardware camera upgrades to the lenses and sensors.

The obtained CAD featured the same notch as current iPhones, but Weinbach’s sources indicate that this detail was not finalized when the CAD was made. The new notch will apparently be smaller and the curvature of the lines will also change. The expected design looks very much like this previous leak. It’s not yet clear how Apple is achieving this miniaturization of the TrueDepth camera components.

The antenna lines on the sides of the device will be getting thicker/wider. This change is probably necessitated by the expected 5G cellular networking support.

One strange change is that the SIM card tray is moved to the other side of the phone. Where you would expect the SIM tray to be … is a new capsule-shaped hole that looks awfully similar to a Smart Connector. This isn’t confirmed and it’s unclear what the utility would be. We’ll have to wait a bit longer to know for sure if Apple is adding a Smart Connector to the iPhone this year. Smart Connectors on iPhones have been rumored for about five years, but have never actually transpired.

The iPhone 12 lineup is expected to launch in the fall. In addition to this 6.7-inch iPhone 12 Pro Max model, there will also be three other variants: two with 6.1-inch displays and a new smaller 5.4-inch model. Apple analyst Ming-Chi Kuo was first to report that Apple would launch four 5G iPhones in late 2020.