AAPL up 4.6% as Chinese economy bounces back from coronavirus 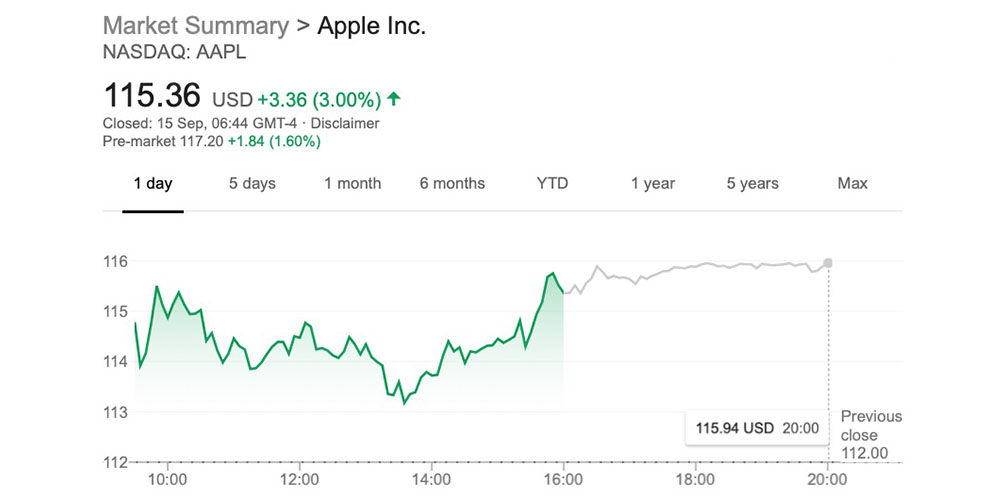 A 3% rise in yesterday’s trading and a further 1.6% in pre-market sees AAPL up 4.6% at the time of writing this morning. This is likely in response to signs that the Chinese economy has largely bounced back from the coronavirus slowdown.

Retail sales, industrial production and exports were all up, according to National Bureau of Statistics data. Increased consumer demand is good news for demand for Apple products within China, while increased production means the company will be better-placed to keep up with demand for new products, including the upcoming iPhone 12 models.

Retail sales, a major gauge of China’s consumption, returned to growth for the first time in 2020, rising 0.5% in August from a year earlier, according to data released Tuesday by the National Bureau of Statistics. The result was better than the 1.1% drop in July and a 0.1% increase expected by economists polled by The Wall Street Journal.

Trade tensions between China and the White House remain, and there is the risk that Trump might ramp up the rhetoric on China in order to try to make up ground in the polls, notes Reuters.

Already heightened U.S.-China tensions are expected to escalate ahead of the U.S. presidential election.

Right now, however, officials on both sides say they are optimistic.

Top U.S. and Chinese trade officials reaffirmed their commitment to a Phase 1 trade deal in a phone call last month. “Both sides see progress and are committed to taking the steps necessary to ensure the success of the agreement,” the U.S. Trade Representative’s office said.

AAPL has, however, been on a generally downward trend since the peak seen the day after its stock split. What will be interesting to see is how the market responds to today’s Apple event.