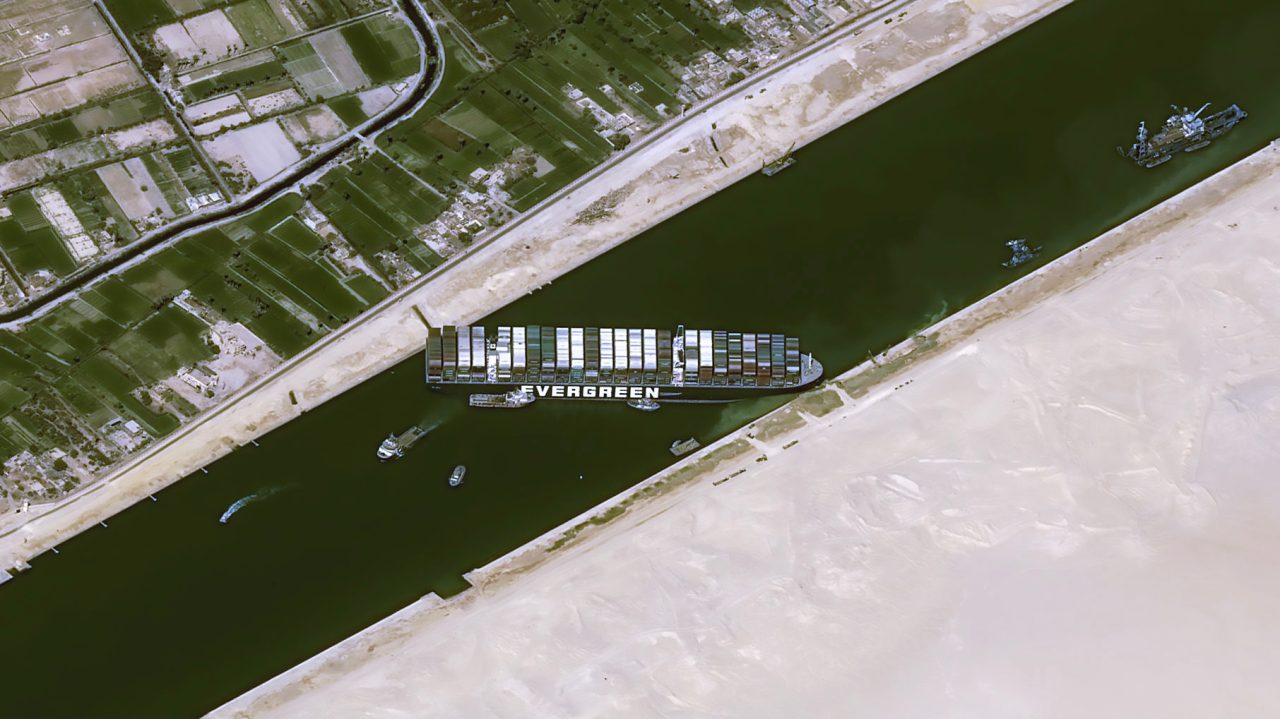 On Tuesday morning, a 220,000-metric ton, 1,312-foot container vessel got stuck sideways, blocking Egypt’s Suez Canal. This canal is responsible for 12% of the world trade, and a new report from NBC News explains what effect this could have on shipping logistics around the world.

Ship stuck in Suez Canal could have wide-ranging impacts

The backstory here is that a severe dust storm and poor visibility caused the container vessel, called the Ever Given to become stuck sideways in the Suez Canal. The Ever Given in particular holds over 20,000 shipping containers, this canal generally allows around 50 cargo ships to pass daily.

Thus far, all attempts to get the Ever Given moving again have failed, so it’s still sitting there and blocking access for other containers. Shipping logistics experts cited by NBC News now fear that this logjam will have a ripple effect on industries around the world.

Lars Jensen, an independent container shipping expert cited by NBC News, fears that “basically anything you see in the stores” will be affected by this delay in cargo shipping. This ranges from “food, furniture, clothes, shoes, exercise equipment, electronics, car parts, and carpets.”

David Fyfe, from market research firm Argus Media, says the best-case scenario is that the logjam is cleared up soon and only delays shipping by a few days. There are already hundreds of ships affected by the jam.

Already, hundreds of ships are stuck in a holding pattern, according to shipping trackers. Clearing up the logjam within a day or so may mean only a few extra days for the delivery of goods from Asia to the United States. But if the Ever Given remains stuck for a week or more, it could add at least 10 days of extra time as ships are rerouted to longer journeys, Fyfe said.

Another expert also weighed in:

The backlog “will impact commodities that are in short supply and don’t have safety stock,” Glenn Koepke, senior vice president of customer success at FourKites, a logistics software company, said in an email. “Typically, buyers plan at least 2-5 days of safety buffer with inbound ocean freight due to delays that can occur at origin or through customs clearance process.”

“If they are able to clear the channel or pull the vessel to the side to allow traffic to flow through, then there should be minimal impact to consumers. If the vessel remains stuck for a week or more, this could have massive implications,” Koepke said.

Whether or not the shipping delays affect Apple are unclear, but the key focus here is the ripple effect the logjam could have. For example, if companies are forced to use other shipping methods to avoid the situation, it could cause delays and increased demands for cargo capacity on passenger flights.

A report last month from the Information also explored the extreme lengths to which Apple is willing to go to avoid delays, particularly during the pandemic. Historically, Apple has relied on buying cargo capacity on passenger flights to ensure products arrive in the right country at the right time. During the pandemic, however, it has also increased its use of express container ships.

Finally, the Suez Canal cargo ship situation also comes amid an existing chip shortage in the electronics industry. While Apple itself is unlikely to be affected by chip shortages directly, reports have already said that the shortages could indirectly hit iPhone production.