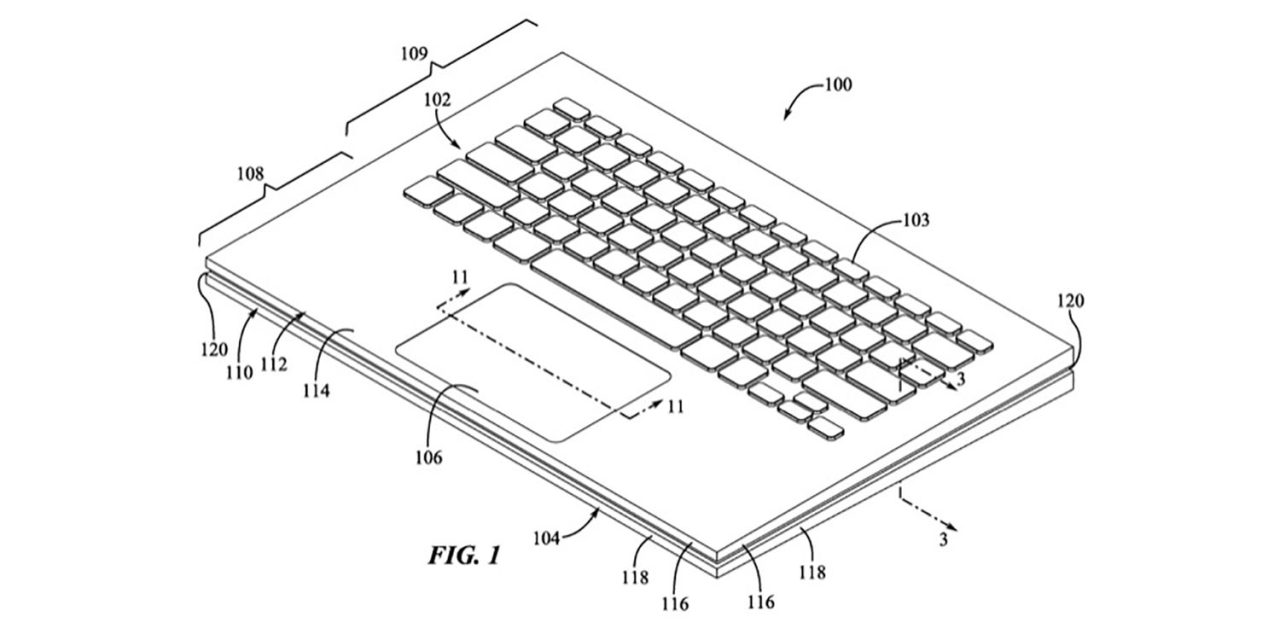 An Apple patent application seemingly shows a single device comprising a Mac Magic Keyboard and Trackpad, with Apple Pencil support across the entire surface of the device.

First, MacBook owners who switch between mobile and docked use could have a consistent experience, with the trackpad in the same position whether using the machine on its own or with external accessories and monitor.

Second, having Apple Pencil support would allow the device to double as a digitizer tablet, like the more basic models made by Wacom.

Apple gives its patent application the prosaic-sounding title of Membrane Sealed Keyboard, and the focus is on providing dust and liquid protection – which is certainly a feature the company could usefully have included in its butterfly keyboards.

Keyboards typically have a number of moving keys. Liquid ingress around the keys and into the keyboard can damage internal electronics. Residues from such liquids, such as sugar, may corrode or block electrical contacts, prevent key movement by bonding moving parts, and so on. Solid contaminants (such as dust, dirt, food crumbs, and the like) may lodge under keys, block electrical contacts, and obstruct key movement. These devices can also be undesirably expensive to make and assemble.

The keys on a conventional keyboard are spaced apart to provide key definition. Key definition is a property of a keyboard that describes how easily a user can tell where a key is located by sight or touch. Typically, strong key definition correlates with large gaps or grooves between the keycaps since those gaps or grooves help orient the user’s fingers on the keyboard. However, spacing apart the keys produces gaps through which liquid and particles can pass into the keyboard. Additionally, due to manufacturing tolerances, keycaps can be slightly misaligned when they each are supported by separate switches, domes and related key mechanisms, thereby leading to an imprecise and noisy visual appearance.

Apple’s proposed solution to this is a “flexible layer that extends over or under the keycaps – which sounds like a (hopefully better-looking version) of the aftermarket protectors available. But the most interesting aspect of the patent application is what’s shown in the drawings. In addition to drawings resembling a MacBook keyboard and trackpad assembly, Patently Apple spotted one (above) that strongly resembles a standalone keyboard and trackpad with the same wedge design as the Magic Keyboard.

There’s also a reference to using it with a “stylus.” Interestingly, Apple doesn’t say that this would be limited to the trackpad area, but rather indicates that the entire surface would act as a graphics tablet.

A user instrument such as a finger or stylus can be moved across the top surfaces of the flexible layer and/or keycaps, and can be used to control the electronic device in a manner separate from the actuation of switch structures that are actuated by pressing down a keycap to mechanically, capacitively, or electrically actuate a switch.

As ever, Apple patents many more ideas than ever make it into products, so there’s no telling whether this one will ever see the light of the day – but would you like to see the company make this? Please let us know in the comments.