What does ‘Ask App Not to Track’ mean? 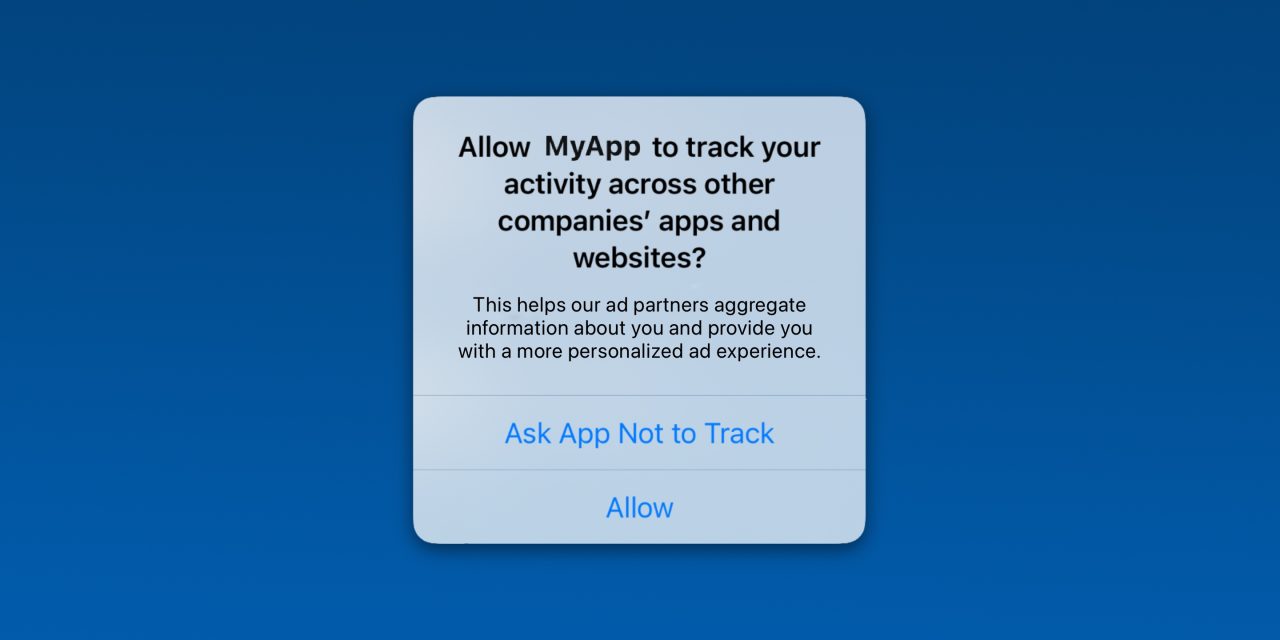 The launch of iOS 14.5 brings with it App Tracking Transparency, Apple’s new initiative to give user’s control about how much of their data is allowed to be aggregated and used by third-parties for advertising or other purposes. But what does the new dialog actually do?

After updating to iOS 14.5, you will start seeing more and more of these App Tracking Transparency dialogs. They look similar to other privacy alerts like the permissions dialog for Location Services or access to your Contacts.

Apple is requiring that any developer that shares user data with a third-party must get explicit permission to do so. You might not see these alerts immediately as companies like Facebook are gradually rolling these permissions request out to their users over the course of a few weeks.

An example alert will say ‘Allow [app name] to track your activity across other companies’ apps and websites?’. The two buttons to choose from on this alert are ‘Ask App Not to Track’ and ‘Allow’.

If you press Allow, the app will be allowed to collect personalized demographics and usage data about you and share it with other companies. This usually means sharing/selling the data on to ad networks.

If you press ‘Ask App Not To Track’, the app will not be allowed to share any information about you with a third party.

One way in which apps can identify users across apps is using something called the IDFA, or ‘Identifier For Advertisers’. This is a unique string that can associate the same user across multiple apps on the device. When you select ‘Ask App Not To Track’, the app cannot access to your IDFA. This is enforced at the system API level.

However, there are other ways that an app may be able to track you, such as by associating your behavior and usage patterns with your IP address or phone number (if you have told the app your phone number, like in a message app). If you have selected ‘Ask App Not to Track’, Apple says that developers must respect that preference and should not use any technique to personalize your user data and send it to third-parties.

Apple cannot know for sure that the developer is not using other techniques to track you. The rules say that pressing this button means the app is not allowed to, but there is not a way for Apple to technically enforce this in the same manner as it can technically restrict access to the IDFA.

Apple says if they find unscrupulous apps not following these rules, the app will be removed from the App Store. The more permissive language in the app dialog is a concession though that nefarious apps will slip through the net. Apple does not want to promise something that it cannot 100% deliver. So that is why the dialog says ‘Ask App Not to Track’ rather than using stronger language like ‘Deny’ or ‘Disallow’.

That being said, make no mistake. A compliant app will not share any of your personal data with advertisers or other analytics firms if you have selected the ‘Ask App Not to Track’ option.

Apple is constantly working on new ways to detect and track breaches of its App Store rules. In the future, it is possible that the wording of the dialog is hardened to something more concrete.

As a user, if you later change your mind about your tracking preferences, you can go into Settings -> Privacy -> Tracking and change the toggles for any app installed on the system. You can also prevent any app from even asking your permission (and therefore defaulting to the ‘Ask App Not to Track’ mode) by switching off the toggle in Settings -> Privacy -> Tracking that says ‘Allow Apps to Request to Track’.