A couple of months ago, we covered the launch of Ringly, a high-tech smart ring that can notify users of incoming messages, notifications, and phone calls. Their pre-order sales campaign has been extremely successful. They exceeded their $60,000 goal within eight hours of launching and reached over $100,000 in sales in under 24 hours.

Through the Ringly app, which will support iOS and Android, you can customize the light and vibration patterns for different kinds of notifications. The ring can notify you when you receive a text, phone call, calendar alert, or email, as well as when you leave your phone behind. It also supports third-party notification from Airbnb, eBay, Facebook, Gilt, Hinge, Instagram, LinkedIn, Lyft, Pinterest, Poshmark, Skype, Snapchat, Tinder, Tumblr, Twitter, Uber, Vine, WhatsApp, and Words with Friends.

The fall launch collection rings are made of 18K heavy gold plating are still available in black onyx, pink sapphire and rainbow moonstone for $145 at the early-bird pricing. After September 1st they will be $195.

Today Ringly is launching a new limited-edition winter style ring, Dive Bar. It differs in style from the initial rings that were launched by being a bit edgier and more modern in design. It is now available for pre-order for $195 and will ship in Winter 2014/2015. One of our lucky readers will be able to win one of the Dive Bar rings. To enter in the giveaway, leave a comment in the post and include your ring size. Winner will be announced next week. 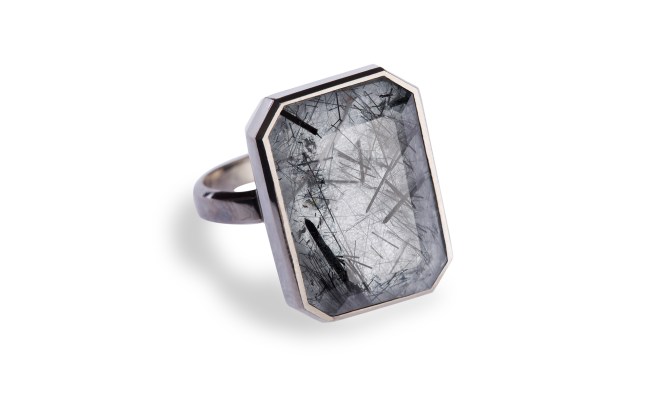