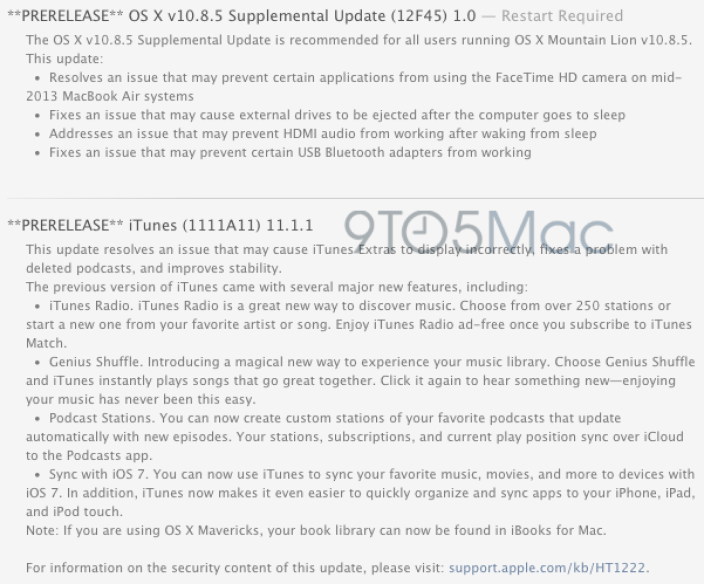 Today, Apple has begun seeding new versions of OS X Mountain Lion, iTunes, Safari and Java to Apple employees. The new OS X build is version 10.8.5, and it is a supplemental update to the version that was publicly released last month. Last week, we noted that Apple was preparing this new version with bug fixes for MacBook Airs, USB, and HDMI, and today’s new seed is a higher build number (12F45 versus 12F42). This indicates that Apple is making progress on the release and that the launch is nearing for customers…

END_OF_DOCUMENT_TOKEN_TO_BE_REPLACED

Following an extensive period of betas for developers, Apple has publicly released OS X 10.8.5. The update is available from the Mac App Store Software’s Update section and is recommended for all users on OS X Mountain Lion 10.8.4.

The build number for the public release is 12F37, which is a single build over the most recent beta. Apple has also issued RAW Camera Compatibility updates and a new version of Safari. Later next month, Apple will release OS X 10.9 Mavericks.

END_OF_DOCUMENT_TOKEN_TO_BE_REPLACED

As with previous builds, Apple says there are no known issues, and the company asks developers to focus on WiFi, Graphics, Wake from Sleep, PDF viewing and accessibility, and Mobile Device Management.

The update is available for developers with older builds of 10.8.5 installed via Software Update in the Mac App Store. It is also available via the Developer Center.