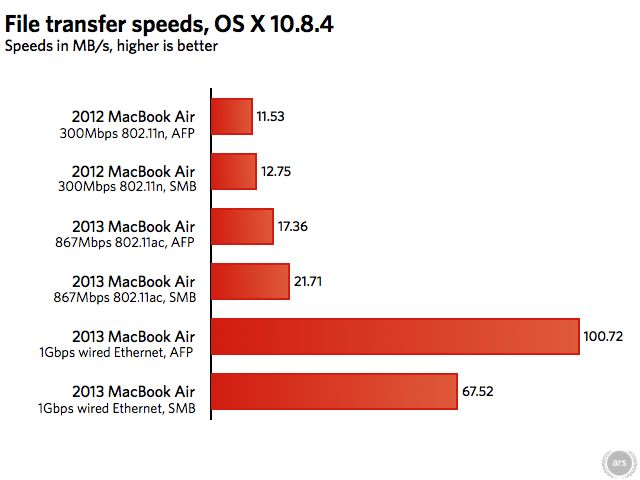 In its extensive review of the new 2013 MacBook Air, AnandTech notes an issue with the machine’s new 802.11ac WiFi capabilities that it says is limiting the faster Wi-Fi chip’s potential. While it was able to get an average of 533Mbps using the iPerf networking tool, Anand found real world file transfers would only get 21.2MB/s or 169.6Mbps:

I disabled all other wireless in my office. Still, no difference. I switched ethernet cables, I tried different Macs, I tried copying from a PC, I even tried copying smaller files – none of these changes did anything. At most, I only saw 21.2MB/s over 802.11ac. I double checked my iPerf data. 533Mbps. Something weird was going on. I plugged in Apple’s Thunderbolt Gigabit Ethernet adaptor and saw 906Mbps, clearly the source and the MacBook Air were both capable of high speed transfers. What I tried next gave me some insight into what was going on. I setup web and FTP servers on the MacBook Air and transferred files that way. I didn’t get 533Mbps, but I broke 300Mbps. For some reason, copying over AFP or SMB shares was limited to much lower performance. This was a protocol issue.

According to the review, the problem is likely with the OS X networking stack that is for some reason artificially limiting the capabilities of 802.11ac: END_OF_DOCUMENT_TOKEN_TO_BE_REPLACED