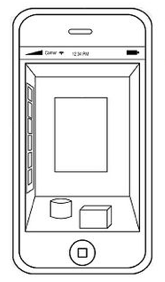 The United States Patent & Trademark Office published an Apple patent application today (via PatentlyApple) detailing new 3D GUI concepts and touch-free, motion sensing gestures that would allow you to simply wave your hand over a device equipped with proximity sensors. This follows a patent application published in July that explores similar 3D gestures and user-interfaces, and another in September detailing 3D display and imaging technology that could lead to Kinect-like gestures on future Apple products.

The image to the right (larger version is below) shows a 3D UI environment consisting of two sidewalls, a back wall, a floor, and a ceiling. As you can see, 2D objects are posted to the back and sidewalls, while 3D objects rest on the floor of the environment. The patent mentions a “snap to” feature that appears to allow objects to move from one surface to another by changing the orientation of the 3D environment. In other words, the user’s perspective of the UI, which PatentlyApple said could be imagined as the “view from an imaginary camera viewfinder,” would change when rotation of the device is detected by its gyro sensor or accelerometer: