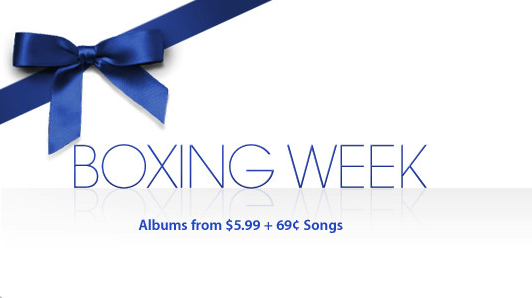 Apple does not often have or advertise sales on Boxing Day, a holiday recognized in the United Kingdom, Canada, Australia, and New Zealand. On the holiday, retailers discount products similar to Black Friday in the United States. However, this year, Canadians are getting a Boxing Week sale on iTunes.

As of right now, Apple is running a promotion in at least the Canadian iTunes store with a selection of 69-cent songs and albums from $5.99, including: Mylo Xyloto by Coldplay, Scary Monsters and Nice Sprites by Skrillex, Foo Fighters’ Wasting Light, and Take Care (Deluxe Version) by Drake.  Each album is selling between $5.99 and $7.99. Altogether, there are 30 or more albums offered.

There is also a selection of 69-cent song collections consisting of the top-selling songs from 2011, best songs of 2011, classic hits, and more.

It is unclear whether Apple will have a Boxing Day or Week sale in its Canadian, U.K., or Australian online and retail stores. Canadian retailers typically run Boxing Week sales from Dec. 24 through Jan. 2, but Boxing Day is traditionally recognized on Dec. 26. It appears the iTunes sale has not popped up in the U.K. or Australian stores, but let us know in the comments if it does.