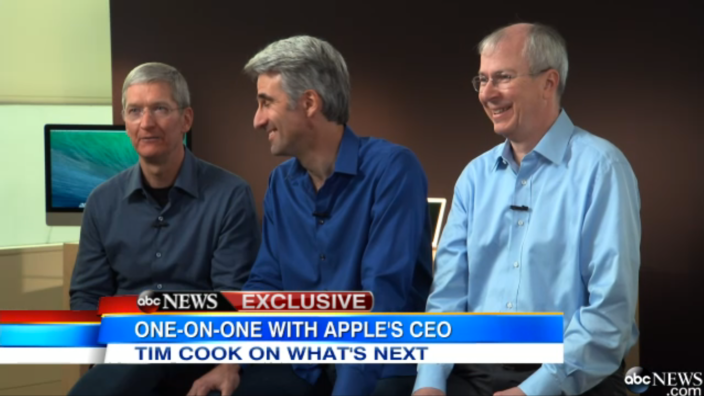 Last night we reported that Apple CEO Tim Cook has been interviewed by ABC in celebration of 30 years of the Mac. Tonight, the interview will air on World News with Diane Sawyer, but this morning, a tease of the interview was given on Good Morning America. ABC has sent us the above video excerpt of the video. As you can see in the video, Cook is joined by Apple Senior VP Craig Federighi and Apple software VP Bud Tribble.

Interviewer David Muir does not hold his questions back, and specifically asks the trio about secrecy, Apple’s plans for its Arizona plant, and about the iWatch. The interview takes place inside of Apple’s Cupertino headquarters, and we learn some new tidbits about Cook from this interview. According to Muir, the Apple CEO wakes up at 3:45 AM each morning and receives between 700 and 800 emails from customers each day. The CEO says Apple wants to make even more made-in-the-USA products (besides the Mac Pro), and he confirms that the new Mesa, Arizona Apple plant is to develop sapphire crystal.

Oh, and the iWatch? Cook jokingly says Apple is making a “ring” instead.

Tonight, the rest of the interview will showcase Cook’s thoughts on the NSA and more. You can watch the full (very interesting!) excerpt below: