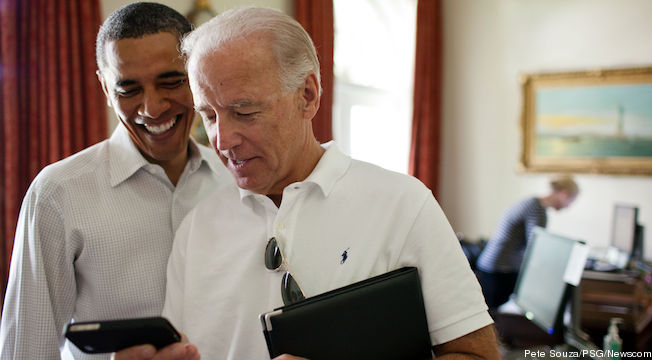 President Obama and Vice President Biden with an iPhone

United States President Barack Obama and his administration have issued a veto on a potential ban for iPhone 4 and 3G-capable iPad 2 models in the United States. The news comes by way of a notice from the U.S. Government. The official ruling comes from Michael Froman, a trade representative for the United States:

In addition, on January 8, 2013, the Department of Justice and United States Patent and Trademark Office issued an important Policy Statement entitled “Policy Statement on Remedies for Standard-Essential Patents Subject to Voluntary FRAND Commitments” (“Policy Statement”).2 The Policy Statement makes clear that standards, and particularly voluntary consensus standards set by standards developing organizations (“SDO”), have incorporated important technical advances that are fundamental to the interoperability of many of the products on which consumers have come to rely, including the types of devices that are the subject of the Commission’s determination. The Policy Statement expresses substantial concerns, which I strongly share, about the potential harms that can result from owners of standards­essential patents (“SEPs”) who have made a voluntary commitment to offer to license SEPs on terms that are fair, reasonable, and non­discriminatory (“FRAND”), gaining undue leverage and engaging in “patent hold­up”, i.e., asserting the patent to exclude an implementer of the standard from a market to obtain a higher price for use of the patent than would have been possible before the standard was set, when alternative technologies could have been chosen. At the same time, technology implementers also can cause potential harm by, for example, engaging in “reverse hold­up” (“hold­out”), e. g., by constructive refusal to negotiate a FRAND license with the SEP owner or refusal to pay what has been determined to be a FRAND royalty.

The would be, no-longer affected Apple devices include the iPhone 4, iPhone 3GS, iPad 2 3G, and the original 3G-capable iPad. This ruling mostly affects the iPad 2 and the iPhone 4 as those are the pertinent products that Apple actually currently sells in the U.S. The President’s block of the ITC ban is the first block of this kind since the 1987 Reagan administration.

Newer iPhone and iPad models, such as the iPhone 5 and 3rd/4th generation iPad, are not affected because they use a different cellular chipset design.

Both Apple and Samsung have both responded to the news.

You can read the full letter from the government below: