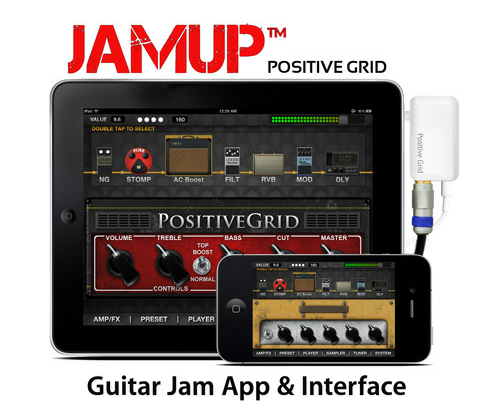 First off, let me just say this is by far the best and most intuitive amp modeling iOS apps that I have seen to date. If you know how to move and manipulate the app layout of your iPhone/iPad, you will be up and running on JamUp in no time. The app has five main sections: Amp/FX, preset, songs, sampler, and tuner.

The Amp/FX section is what you would expect. It is an area for you to experiment with by adding and manipulating amps and effects in various locations in your signal chain. Various staple amp models are featured, as well as the tried-and-true lineup of effect pedals. The amp sounds are genuinely warm and sound noticeably better than comparable models in Amplitube’s amp modeling app. With that said, some of the amp features are not as faithful to the models they are based upon. On-board tremolo and decent clean sounds are noticeably absent on some heads. The pedals sound great. A feature I would like to see added is the ability to stack the same model pedal in series, instead of using it only once.

The Preset section is a collection of sound patches pre-programmed by PositiveGrid that serve as nice launching points for tinkering and coming up with your own sounds that can then be saved. It is self-explanatory, but what makes this work as easy as it does is the fast and intuitive interface. It is also much less daunting and intimidating than similar apps.

The Songs section is great, because it allows you to jam along with any audio file in your iDevice’s music library. You can sort/find the songs in your library in a variety of ways, and control the volume mix. You can even vary the pitch/speed of the music playing! I loved this feature for playing along with some bands that detune a half or whole step. The pitch change alone does not vary the speed. These features are a great practice tool for breaking guitar parts down and playing through setlists by bands with various tunings.

The Sampler section allows you to record yourself playing a section of music, and then you can play something along with it, after the fact, in loop fashion. This is another great tool for practicing and songwriting. I especially liked the ability to export and share recordings as song ideas. 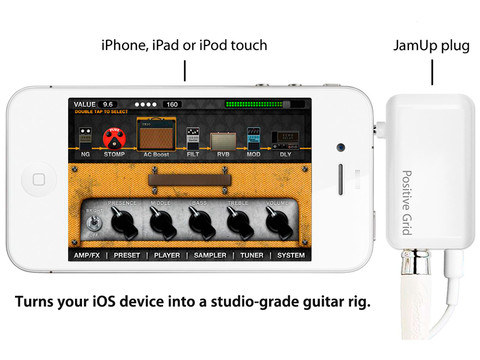 The Tuner is self-explanatory, although, again, I really like the interface choice (the vintage “note wheel”). It also cuts the audio output, so no one is forced to hear your droning notes being tuned.

Another great feature of this app is the interoperability that it provides with many guitar input interfaces. More than half a dozen other interfaces work with the app besides PostiveGrid’s own JamUp Plug. I compared the audio response of IK Multimedia’s iRig and the JamUp Plug, but the JamUp model was undeniably better sounding. However, noticeable clipping is evident while using some sound combination choices, regardless of input level and interface chosen. This is a problem not unique to this app, but it frustrates nonetheless.

I think the JamUp is a wonderful tool for guitar players looking to experiment with different amps and pedals before buying the real deal. It is also quite handy in helping to decipher songs and putting simple song ideas together. It sounds much better than Amplitube. It does not offer the ability to dive as deeply into sound tweaking as the rival app by Agile Partners, but its interface is much smoother and intuitive.