iPhone 4S clocked at 800MHz, still crushes iPhone 4 (and everyone else) as advertised

The first SunSpider and BrowserMark benchmarks 9to5Mac told you about yesterday confirmed the iPhone 4S as being “twice as fast”, per Apple’s tagline. Today, AnandTech published a more thorough analysis based on Javascript, CPU and GPU benchmarks of Apple’s latest handset. Thanks to the dual-core A5 chip first outed with iPad 2 this Spring, Javascript performance on iPhone 4S “finally catches up to Tegra 2 based Honeycomb devices, while general CPU performance is significantly higher than the iPhone 4” – about 68 percent, to be precise.

More importantly, Geekbench results (seen below) tell us that iPad 2 is clocked around “25 percent higher than the iPhone 4S”. Overall, the Apple-designed dual-core A5 chip inside iPhone 4S is estimated to run at 800MHz versus iPad 2’s 1GHz A5 processor. This isn’t entirely unexpected due to the battery concerns and the handset’s much smaller 5.25 Whr battery. Furthermore, Apple says iPhone 4S has “up to seven times faster graphics” versus the advertised “nine times faster graphics” on the iPad 2 – another proof that the two device’s graphics processing units are not clocked equally.

As we predicted, Imagination Technologies’ PowerVR SGX543 graphics units ticking inside the iPhone 4S is also significantly speedier compared to the ARM-based Mali-400 GPU found in the Samsung-designed 1.2GHz Exynos 4210 processor (they recently announced the improved 4212 chip) used in the Galaxy S II smartphone. By all accounts, the iPhone 4S has the fastest graphics in a smartphone yet. Anand Lal Shimpi and Brian Klug explain: 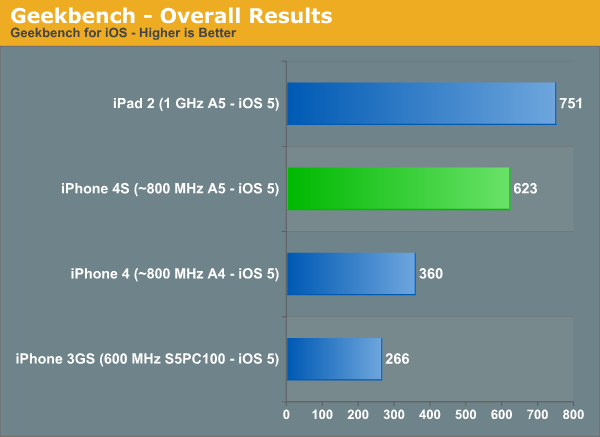