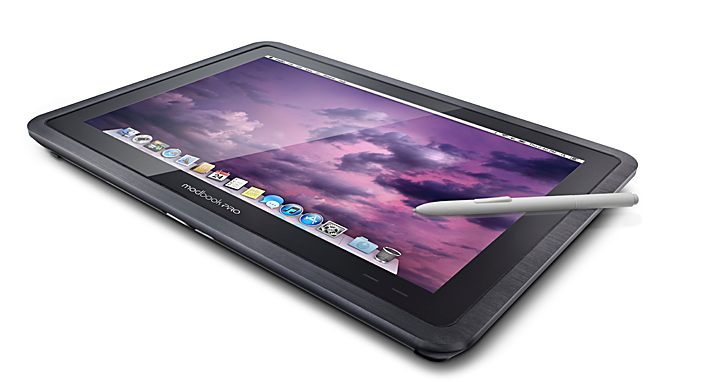 Almost three years before Apple launched the original iPad in 2010, a company by the name of Axiotron unveiled the first “Mac tablet” with the launch of the Modbook—a stylus-based tablet running OS X that is made from a converted MacBook Pro. Today, the Modbook is officially returning thanks to one of its original developers and designers. Former co-founder of the now-defunct Axiotron, Andreas Haas, and his new company LA-based Modbook Inc., today announced the new Modbook Pro- “the world’s most powerful and largest-screen tablet computer.”

Like past generations of the Modbook, the Modbook Pro uses the guts of one of Apple’s new MacBook Pros. The company will offer two configurations, both with a 13.3-inch, 1,280-by-800 flush-mounted display, based off the specs for the recently refreshed non-Retina MBPs running Mountain Lion:

The company is promising seven hours on a full charge from a built-in 63.5-watt-hour lithium-polymer battery (Modbook will also utilize a 60W MagSafe adapter). As for the digitizer and included stylus, Modbook will once again use Wacom tech: