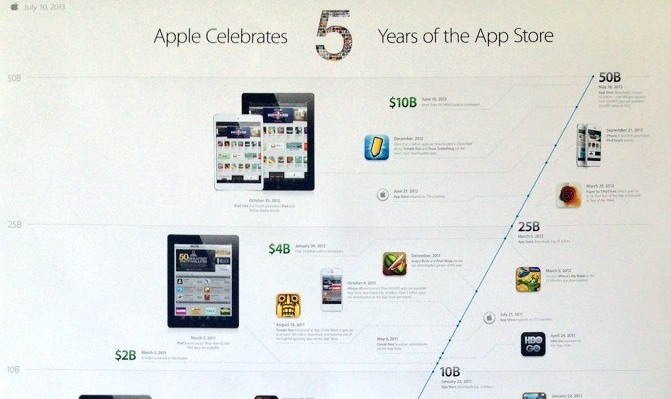 In celebration of the iOS App Store’s upcoming 5th anniversary, Apple has created a timeline of notable events in the App Store’s history.

This timeline has been sent to members of the media, including The Financial Times’ Tim Bradshaw, and Apple has created similar promotions in the past.

Earlier this year, Apple sent out a similar celebratory memento for the iTunes Store’s 10th anniversary of existence. Coupled with the note to press, Apple launched a public-facing website to honor the date.

Perhaps Apple will launch a similar site for the App Store’s 5th anniversary on July 10th. Full image and a Vine below:

END_OF_DOCUMENT_TOKEN_TO_BE_REPLACED

Today marks the one-year anniversary of iTunes Match, the yearly-subscription service that allows folks to store their music libraries to the cloud for listening anywhere and anytime on any Apple device, and that means those who subscribed on launch day should begin seeing the annual $24.99 fee debited from their accounts.

iTunes Match launched Nov. 14, 2011 after being pushed back a month. Sound familiar? If for some reason you don’t want to enroll another year, better make sure to uncheck auto-renew.