Tim Cook featured at StartupFest this morning, in an interview with Neelie Kroes discussing Apple’s influence in startups and entrepreneurship culture. Cook covered many topics including the role of entrepreneurs and the App Store, the startup climate in Europe, economic optimism, technology in education, Apple Watch and more. We’ve included some snippets of the talk below …

In the interview, Tim Cook says Apple gives entrepreneurs the ability to sell their app instantly worldwide through the App Store. Apple provides technical and marketing assistance to clear the path so the developer can focus on their product. Most young companies should be principally focused on the product; Apple tries to help ease the frictions to fuel more entrepreneurs to do exactly that. Apple is bringing an app development center in Naples to kickstart the app economy in places it hasn’t yet been.

END_OF_DOCUMENT_TOKEN_TO_BE_REPLACED

Attention politicians: For every low-wage job shipped to Shenzhen, the App Economy creates a quality job in the US

American politicians are in a hullabaloo over the 500,000 Foxconn low-wage jobs in China that they claim could be stationed in the United States, but no one seems to pay attention to the booming “App Economy” that created roughly the same amount of decent jobs stateside. Both sides of the aisle have made public statements on how the Cupertino, Calif.-based Company should bring its grueling $0.31-an-hour factory occupations home.

President Barack Obama reportedly once asked the late Apple CEO Steve Jobs, “What would it take to make iPhones in the United States?” at the Silicon Valley Summit last year, and Jobs allegedly responded: “Those jobs aren’t coming back.” The New York Times described why those positions are not returning last month. You can watch the Republicans, perhaps besides Ron Paul, be just as dumbfounded about the labor issue in the video above.

Bureaucrats can toy with the idea of stimulating employment, but innovation —the creation of new goods and services— is already boosting industries and small businesses capable of employing hundreds of thousands of workers at respectable wages. For example: According to Indeed.com, the average app developer salary in Palo Alto, Calif., is $119,000 a year. 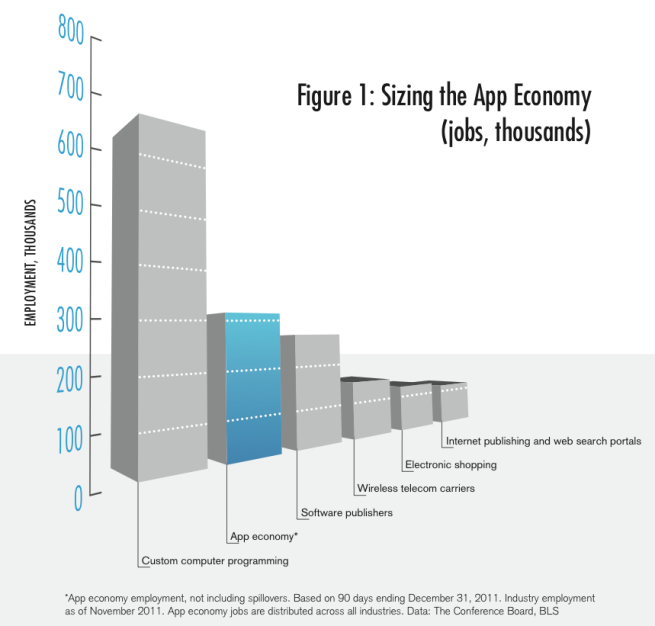 “Nothing illustrates the job-creating power of innovation better than the App Economy,” contended a new NetTech sponsored study (PDF) released today. “The incredibly rapid rise of smartphones, tablets, and social media, and [apps] that run on them, is perhaps the biggest economic and technological phenomenon today.”

The Bureau of Labor Statistics is currently unable to track App Economy employment numbers. TechNet is a “bipartisan policy and political network of technology CEOs that promotes the growth of the innovation economy,” and it enlisted Dr. Michael Mandel of South Mountain Economics to conduct analysis from The Conference Board Help-Wanted OnLine database and track accurate employment statistics.

Dr. Mandel’s conclusions illustrated that the industries housed under the App Economy’s wide umbrella are responsible for an estimated 466,000 jobs (including spillovers not depicted in the above graph) across the states…