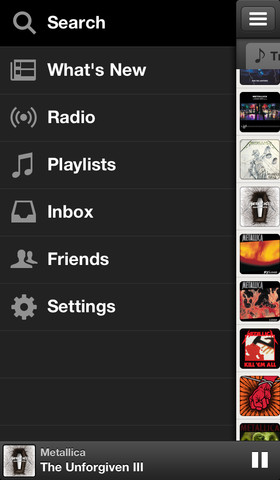 In addition to a new Cloud Player app for iPad from Amazon and the roll out of iTunes in the Cloud features to new countries, below we have put together our usual list of notable apps and updates hitting the store today:

Spotify version 0.6.0: Perhaps the biggest update today goes to the Spotify iOS app which, on top of receiving a “shiny new interface” equipped with a sidebar, includes a “Now Playing” bar, a new Track menu, and a number of other new features and fixes:

• New: Shiny new interface. You can navigate around the app with a new sidebar. Check it out by swiping left-to-right, or by pressing the ≣ button in the top left of the app.
• New: Now Playing bar. You’ll always see what you’re listening to along the bottom of Spotify. To switch tracks, just swipe along it. Tap or drag to see more information about the current track. Tap the cover art in the extended view to use AirPlay, and disable/enable shuffle and repeat.
• New: Track menu. Tap the … button on any track to see a redesigned context menu.
• Fixed: “Track only available online” issues. This would sometimes appear after start-up, or when you’d been offline for a little while. Not any more.
• Fixed: Lock screen will now always display the correct track.
• Fixed: Shuffle now switches off after you’ve used “Shuffle Play” on an album or playlist.

Waze version 3.6: Waze, one of Apple’s Maps partners and an app CEO Tim Cook recommended as an alternative during the iOS 6 Maps controversy, gets some nice new features today. Among the new features is real-time road closure reporting and routing, a refined map with only relevant road names, and much more:

PanoPerfect for iPad: We’ve told you about the PanoPerfect app before– an Instagram type experience designed specifically for sharing panorama shots. Today the developers have released its first iPad version of the app and also revamped the iPhone app.

Tweetbot version 2.7.3:  The iOS versions of the Tweetbot apps get a few tweaks. The iPad version gets the same update: END_OF_DOCUMENT_TOKEN_TO_BE_REPLACED