Apple’s Japanese bond sale will raise more than expected, at $2B

Apple is selling the bonds in Japanese yen due to the extremely low interest rates in the country, with Apple offering a rate of just 0.35%, paid twice a year in June and December. Goldman Sachs, one of the two underwriters of the bond issue, said that the market would welcome the offering.

“It’s Apple’s first time issuing in yen. Their ratings, credit fundamentals and familiarity within the Japanese market are very high,” said a Goldman Sachs banker. “The outcome proves how much the market welcomed seeing this issuer come up.”

Although Apple has huge cash reserves, the majority of this is held overseas and cannot be repatriated back to the U.S. without large tax liabilities. It is cheaper for the company to borrow money to fund its stock buyback program and to fund dividend payments. Apple announced in April that it will spend $200B by the end of March 2017 on a mix of share repurchases and dividend payments.

The changing world map of Apple’s customers in two charts

Apple’s efforts to secure the China Mobile deal were long, drawn out and likely involved rather more negotiation than the company is used to. But if you ever had any doubts as to the importance of those efforts in China, Japan and elsewhere in the Asia-Pacific region, the above two charts, compiled by Fortune, make the reason very clear.

The bad news for Apple is that revenue from its two biggest segments — Europe and the Americas — have begun to contract, not just as a percentage of total revenue, but in dollar terms as well. The good news is that Japan, Asia Pacific and Greater China have so far more than taken up the slack. In Q1 2014, Apple’s combined Asian sales were $17.4 billion, more than Europe ($13 billion) and closing in on the Americas ($20 billion). 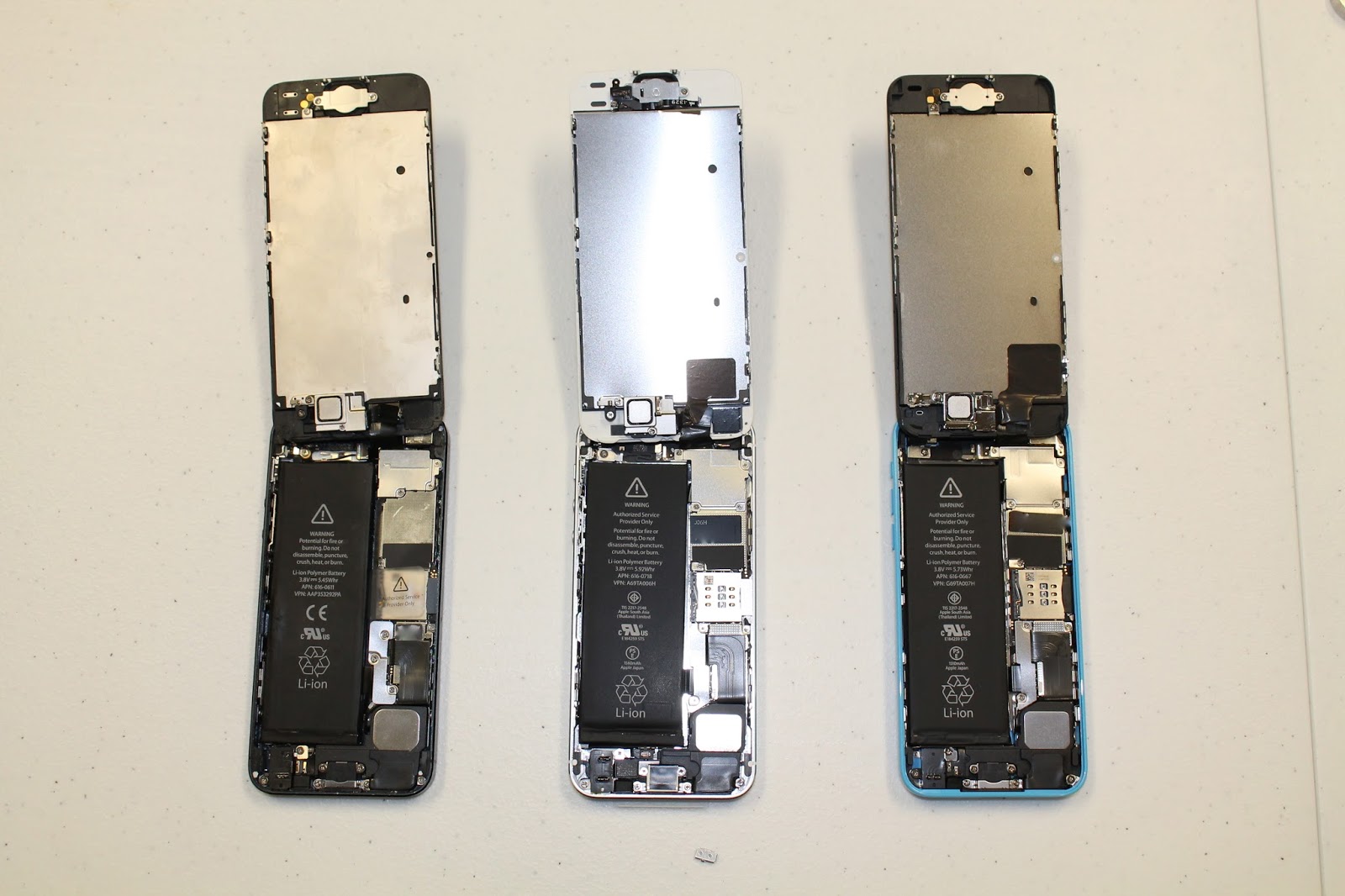 With Australia, alongside other countries in Asia included in the initial September 20 iPhone launch, the first to get their hands on the iPhone 5s and iPhone 5c, a repair company in the country has just posted the first teardown of the two new iPhones. The iExperts Team out of Australia has taken apart both devices, revealing new components but not yet giving us a look at what we expect will be a Samsung made A7 chip.

The first thing noticed in the teardown was a new connector for the TouchID fingerprint sensor assembly. Lining up with leaks leading up to the launch of the iPhones, it also found a 5.92Whr battery in the 5s (up from 5.45Whr in the iPhone 5), and a 5.73Whr battery in the iPhone 5c. Internal layouts for the two new iPhones also seem to line up with part leaks we seen in recent months. Interestingly, the site notes that the batteries are stamped with “Apple Japan.”

Many of the teardown shots below also include an iPhone 5 next to the 5s and 5c for comparison.

iExperts notes that Apple has fixed an issue from previous generation devices by adding an extra coating to switches “that should help hold them together to prevent the failures prevalent in the other models.”

We don’t learn much more from the teardown, which is likely still in progress as the site analyzes new internal components, but we’ll be learning a lot more as others pry into their new iPhones in the hours ahead. The teardown also gives us a good look at Apple’s new home button/fingerprint assembly: END_OF_DOCUMENT_TOKEN_TO_BE_REPLACED