Update: The reporters at Bloomberg are somehow using us as a source for this false rumor.  We’ve contacted them to correct but they’ve so far left it untouched.  Our report comes from iFoAppleStore and CultofMac (below) 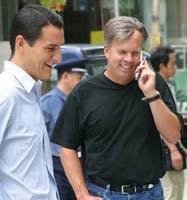 Updated from Cult of Mac: Apple has gotten back to us a statement, reading: “The search for a replacement for Ron Johnson continues, and Apple has nothing to announce about this subject at this time.”

Updated: 2: Apple wanted to make sure it was clear that no decision has been made yet and the Cult of Mac story is without merit.

Ron Johnson has only been gone a few days but rumors are already swirling that Steve Cano will be replacing the new JCPenney CEO as head of Apple’s retail business. Cult of Mac reports separately from an earlier post by ifoAppleStore’s Gary Allen which seems to indicate that Cano will assume the position. Here is the full statement as released by the Apple Retail Workers Union:

Statement regarding Steve Jobs and the future of Apple

The organizers of the Apple Retail Workers Union wish to express their condolences to the family of Steve Jobs. He was an inspiration to many, and will be regarded as one of the greats of our time. He followed his heart and did what he loved, which resulted in Apple becoming one of the greatest companies in the world. He surrounded himself with intelligent people who helped create technology that improved the way we live and share our lives.

With that in mind, we want to remind that while Steve and his teams created products and solutions to work “right out of the box”, Apple’s retail stores are still experiencing problems 10 years after launch. The messages we receive from workers illustrate a desire for improved compensation, consistent management policies and adherence to local, state and national laws. The feeling extends to the workers at Apple’s suppliers including Foxconn, Wintek, Samsung and others.

We wish much success to Tim Cook and Steve Cano, who will be leading Apple and its retail stores going forward. As word of our movement grows and workers become increasingly interested in finding solutions where management is unwilling or unable, we continue to take pride in the opportunity we have every day to provide our customers with enriching experiences. At our core, we simply want Apple to return to its roots and remind itself that their “most important resource… is our people”.

We can’t confirm that Cano has been promoted and in fact his role is still listed as Apple retail employee in Region XV. He’s certainly in the running, as one of Ron Johnson’s subordinates.

Cano started with Apple ten years ago as the manager of Steve Jobs’s local Palo Alto Apple Store. He then rose through the ranks…