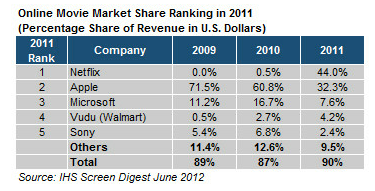 What Netflix and iTunes have in common is that both services are focused on the hardware side of the business… Netflix is available on a very wide range of connected devices, while iTunes can take advantage of Apple’s soaring device sales growth… Nevertheless, comparisons between the two services have their limits… “Effectively the market has split,” Cryan said. “Netflix and Apple are competing for some of the same consumer time and money. However, the core value proposition of the two services is actually very different.”

While Netflix rules the SVOD market, its closest competitor—Hulu—is less than 10 percent of its size. Apple’s iTunes continues to dominate the transactional segment, accounting for 63.0 percent of revenue in this area, which was only down slightly from 64.6 percent in 2010. At the same time, the big growth story of 2011 was Walmart’s Vudu, which captured 8.2 percent of the growing transactional market, up from 2.8 percent last year. Most of this growth has been achieved by using a Netflix-like device strategy and has come at the expense of other providers, not Apple.

Seriously, how long until everyone knows iOS devices are traceable by GPS? (non-Flash)

END_OF_DOCUMENT_TOKEN_TO_BE_REPLACED

Monster Apple Store in the heart of Hong Kong’s IFC center to open this fall? (update: new California store, too!) 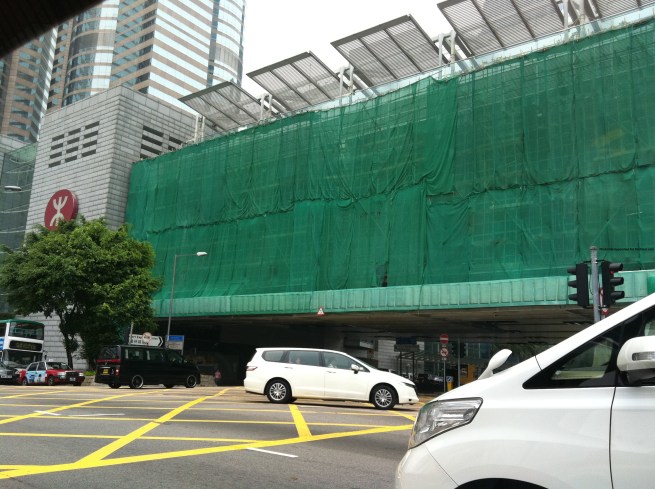 Apple’s Hong Kong Flagship store just got the curtain treatment according to a 9to5mac reader Nastypenman.  The IFC center is the gateway to Hong Kong from the Airport rail link (ferry terminal, subways, etc) and is in the heart of Central, Hong Kong’s premiere shopping and business district.  The IFC had evict or relocate about 20 stores on two-three levels, circled below in this Macrumors report from March.  It could be Apple’s most expensive store to date (rent-wise) as Hong Kong’s prices are some of the highest in the world and this is about the most sought-after spot in Hong Kong.

Apple is also rumored to be building another local store, possibly in Pacific Place a short walk away. 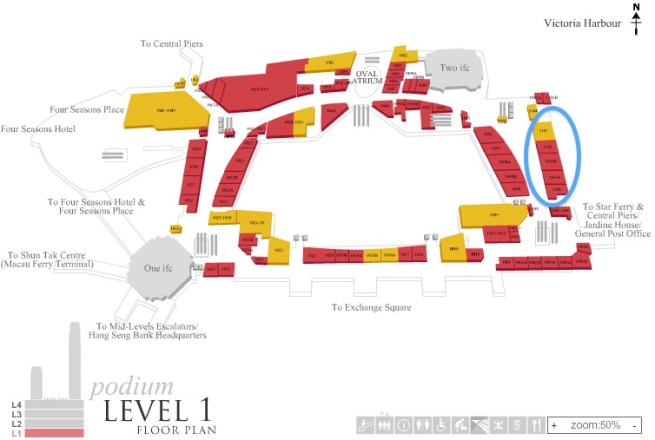