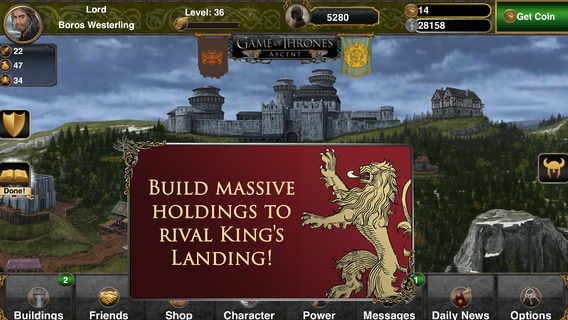 Following a release for iPad back in March, HBO’s Game of Thrones Ascent game developed by Disruptor Beam & Kongregate is now available for iPhone. The game already racked up around 2,500,000 players on Facebook and the web before making its way to iPad in March, and it comes to the App Store with new art, optimized imagery for Retina displays, and Game Center leaderboards.

With Game of Thrones Ascent, fans can immerse themselves beyond the books and show, living the life of a noble in Westeros, working with (or against) each other in a persistent, authentic game world. Taking part in thousands of story-driven quests, players delve deeply into the lore and develop their own lands and reputation among the Great Houses. Players explore an expansive world filled with deep political and social play involving diplomatic agreements, pacts, marriages, and betrothals. Through Alliance challenges, players work with hundreds of others to accomplish great tasks and rise to the top of the Power Rankings.

The developers update the game weekly and alongside new episodes of the TV show when it’s airing. That includes new quests, in-game items and more that follow the storyline of the show.

Game of Thrones Ascent is available for iPhone now as a free download on the App Store.