Apple’s Beats 1 global radio station went online this week, and its programming is already grabbing plenty of headlines. The challenge: just like conventional radio, the station doesn’t (yet) offer on-demand recordings of complete past shows. If there’s a DJ, specific artist, new show, or interview you’re really interested in hearing, you’ll need to tune in live… or, if you have a spare iOS 8.4 (or soon, iOS 9) device, you can use this handy guide to record Beats 1 shows using OS X’s free built-in app QuickTime Player. Read on for the details…

END_OF_DOCUMENT_TOKEN_TO_BE_REPLACED

SoundCloud today released a brand new iPad app that has been completely redesigned to offer a better experience for users uploading, sharing, and listening to music through the service.

You’ll have access to just about all the SoundCloud features available on desktop including the ability to build a Collection, explore genres, edit and view profiles, create playlists, and share tracks and artists with other users.

You also won’t be able to add or view comments, track info, and follower/following lists, but unlike the audio recording feature SoundCloud said these features will be returning in a later version.

The new SoundCloud app for iPad, version 3.7.1, is available on the App Store now.

The beautifully redesigned SoundCloud iPad app gives you a simplified, more intuitive and more visual experience. Discover and hear fresh/new music & audio, and log in to build your Collection, create playlists, and be the first to share your favorite tracks & artists with friends and followers.

Please upload any locally stored sounds before upgrading your iPad app, as audio recording has been removed from this version. For future recording, we recommend downloading one of the many apps that allow you to record and post directly to SoundCloud. For your activity feed, track info and user comments, please go to www.soundcloud.com.

And for both iPhone & iPad users we made some performance improvements which give you a smoother scrolling experience! 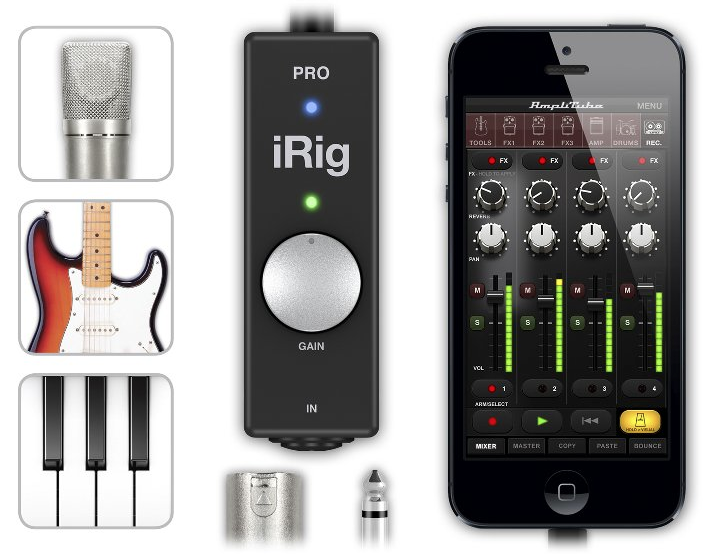 IK Multimedia has announced what it claims is “the most versatile compact audio interface on the market”. iRig is a small battery-powered box that allows musicians to connect microphones, guitars, line instruments or MIDI devices to a Mac, iPhone, iPad or iPod touch.

iRig PRO is designed to give mobile musicians and songwriters an interface that can handle the widest variety of audio input signals, so they can create music and audio on the go anywhere, any time.

It accepts virtually every type of audio and MIDI input. Users can plug in a dynamic or condenser microphone; a guitar, bass or other Hi-Z instrument; or any line-level source.

Additionally, iRig PRO is equipped with a MIDI input for keyboards, pads and controllers, making it a truly universal compact interface for recording and composing on the go or in the studio. Its audio and MIDI inputs can be used simultaneously, for example, to control guitar or vocal software with MIDI foot controllers or pedals, for switching presets or controlling effects levels …  END_OF_DOCUMENT_TOKEN_TO_BE_REPLACED