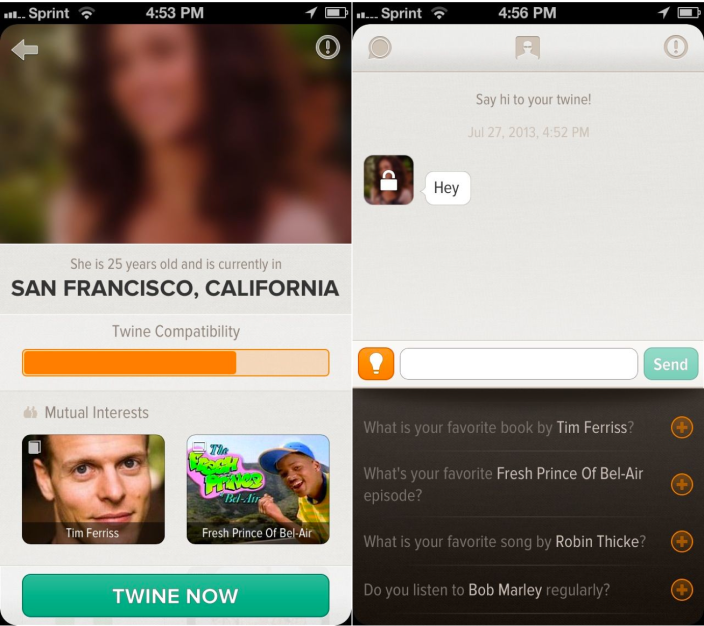 Sourcebits, a popular app studio that’s worked with Coca Cola, GE, and Hersheys, believes they’ve created a unique network that will fundamentally change the way you meet and converse with the people around you. It’s called Twine and unlike the current players in the mobile dating space, Twine emphasizes your interests and the conversations derived from those interests instead of your appearance. While the app doesn’t guarantee that you’ll find your perfect match, it does put a refreshing spin on the traditional dating game by imposing certain restrictions on how you can meet and interact with people.

Twine also employs a unique, patent-pending algorithm Sourcebits referes to as ICE (Intelligent Conversation Enhancer). This attempts to create the most compatible local connections based on a combination of interests and proximity. Twine detects your location with respect to other users by simply pulling your iPhone’s geolocation. The app then connects that information with your interests (from Facebook) so that each connection maintains more than one commonality. In my limited testing, the app connected me with other users that had several common interests, including mutual favorite TV shows, movies, and books.

Lastly, Twine puts conversations first by blurring user photos and name until both parties are comfortable with unveiling their identity. Tapping on the ‘Reveal Now’ button will send a request to the participating user offering them to view their partnersface and name, as well as reveal their own. Sourcebits says, “this allows users to focus on connecting first rather than superficially basing their decision to engage on a profile photo. Flirt first, reveal later.”

Unfortunately, for more flirtatious users, Twine sets a limit on the amount of outgoing and ingoing twines you can both send and recieve to three per day so as to focus each user on creating and maintaining meaningful conversations with other users. Twine helps you in this regard by suggesting unique topics to talk about based on respective interests. If, however, you are a particularly smooth talker, you can earn a bonus Twine to talk to a fourth person that day. It’s an interesting break from most all other traditional dating apps, which almost ironically place emphasis on one’s appearance. For that reason, Twine may have a good shot and capturing a reasonable amount of marketshare from an already fairly crowded space.

Twine requires a Facebook account to sign-up, which may irk some users but it requires Facebook’s info to power almost all of its functionality. On the whole, Twine does what it promises and is therefore well worth a try. The app will match you with relatable strangers to start an interesting conversation as advertised, but it won’t fundamentally change the way you date online.

You can download Twine on your iPhone or Android smartphone for free today.