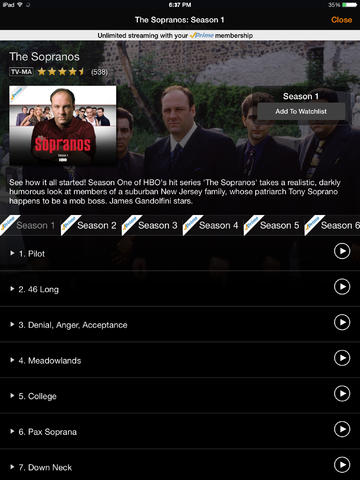 Even though Amazon is investing heavily in its Fire platform including new Fire TV and Fire Phone, it still is showing some chops for iOS. Today’s free update brings the latest features of Amazon’s Video service to its iOS apps.

Amazon upgraded the iPad and iPhone apps today with all new video playback controls, including one-touch play/pause and 10-second skip forward/backward buttons, and a “Next Episode” button to quickly play back the next episode of the TV show you’re watching (requires iOS 6 or later). If you are thinking about buying a season of a TV series, you can now peep out the first episode for free.

The biggest update however is access to HBO shows like The Sopranos (right), The Wire, and Deadwood, plus early seasons of True Blood and Boardwalk Empire. As with any update, this one includes bugfixes and stability improvements including faster playback start times.