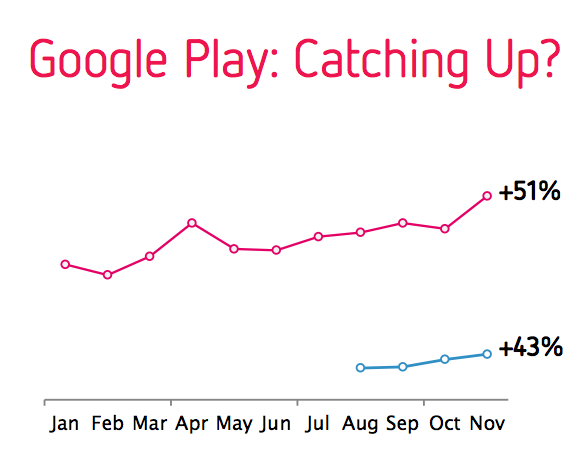 To round out the year in review, Distmo breaks down revenue by category in the charts below: the top 10 most grossing cross-store publishers, the top 10 publishers and apps by downloads on the App Store, and the top five highest growing countries by revenue. There aren’t many surprises: END_OF_DOCUMENT_TOKEN_TO_BE_REPLACED

Likely further increased by Apple’s recent announcement to begin accepting App Store payments in Chinese Yuan, Distimo said when comparing the United States and China, 30 percent of downloads are coming from China. This is up from approximately 18 percent reported by Distimo in January 2011.

Growth in China is even more impressive when looking at just iPad numbers with China now accounting for 44 percent of all downloads from the two countries. Distimo reported late last month that App Store downloads for the top 100 paid apps in China nearly doubled just days following Apple’s decision to accept Yuan.

During Apple’s fourth quarter earnings call, CEO Tim Cook called the progress in China “amazing” and said the country represents “enormous opportunity.” As of that time, revenues from China accounted for 16 percent of Apple’s revenue for the September quarter – approximately $4.52 billion.

Some of the other interesting numbers reported by Distimo, include: 50 percent of App Store revenue for iPhone is now generated by freemium apps and in-app purchases for the 200 highest grossing apps; there are currently 79,077 games for iPhone, 28,683 for iPad, and 46,045 for the Android Market.

While the report noted App Store downloads have been on the decline for the year, downloads peaked following the release of the iPad 2 and iPhone 4S. Distimo attributed the increase to what they call the “anticipation effect” for Apple’s new devices.

Distimo put together their App of the Year Award based on total downloads worldwide across all platforms. Not surprisingly, Angry Birds took the top spot, followed by Facebook, Skype, Google Maps, and iBooks. Check out the full top 10 below.

END_OF_DOCUMENT_TOKEN_TO_BE_REPLACED

Unlike the App Store mobile bazaar which is the home to 99-cent quick sellers, with about one third free items, inexpensive software takes a back seat on the Mac App Store. According to a Distimo study based on an analysis of major application stores, less than one in eight apps on the Mac App Store are free of charge and games comprise 29 percent of all submissions.