We reported yesterday that Apple was requesting Chinese manufacturer In Icon to cease production of what is probably the most realistic Steve Jobs figurine to date. While we already knew CEO Tandy Cheung’s stance on Apple having the copyright to Steve’s likeness, a new report from Paid Content claimed the doll is in fact legal in most states and “Apple’s legal claim is largely bogus.”

The report explained that people do own the rights to their likeness, but most American states do not recognize these rights after death. In fact, according to Paid Content, only a dozen states currently recognize “personality rights” after death.

What this means is that Apple’s warning about the doll is an empty threat in most places. It may not even be able to stop others from using the name Steve Jobs as, surprisingly, the term does not appear on the company’s long list of registered trademarks.

In light of that news, several of the figurines appear to have made their way to different eBay stores globally. One —on the United States eBay store— is listed with a ‘Buy It Now’ price of US $138.88 and ships straight from Hong Kong. The figurines have also landed on the Australian eBay here. You can still preorder from In Icons’ official website for $109.99 with shipping expected to start in February. However, the website noted it is a ‘first-come, first-served’ policy with refunds being issued when initial limited stock runs out.

Paid Content cited the following list of states where the doll could potentially run into an issue, according to a recent paper on Dignitarian Posthumous Personality Rights:

END_OF_DOCUMENT_TOKEN_TO_BE_REPLACED 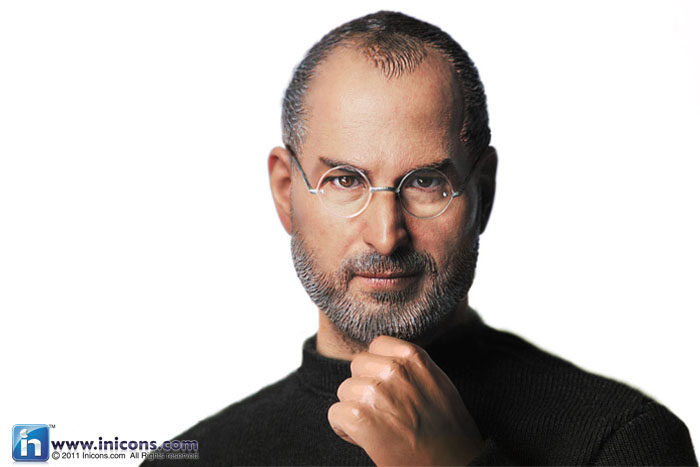 We had a feeling it would not be long before Apple stepped in and shut down Chinese manufacturer In Icon’s plans to create an extremely realistic Steve Jobs figurine, and today The Telegraph reports the 12-inch doll originally slated for release in February is now facing legal threats from Apple if the company doesn’t cease production plans.

According to the report, Apple claimed it owns the rights to Steve Jobs’ likeness and in a letter to the company claims toys using the Apple logo, a person’s name, or likeness of Jobs is considered a criminal offense.

The 12-inch figurine, which comes complete with Jobs’s trademark blue jeans, sneakers and black turtleneck sweater, was created by Chinese company In Icons and was set for release in February. But ‘their efforts have reportedly met with’ a legal challenge with Apple allegedly threatening to sue the toy maker unless they cease trading.

“Apple can do anything they like. I will not stop, we already started production…Steve Jobs is not an actor, he’s just a celebrity… There is no copyright protection for a normal person… Steve Jobs is not a product… so I don’t think Apple has the copyright of him.”

This is not the first time Apple has put a stop to Steve Jobs figurines. MICGadget was forced to stop selling their toy in November 2010 after Apple sent the following email (excerpt below): END_OF_DOCUMENT_TOKEN_TO_BE_REPLACED