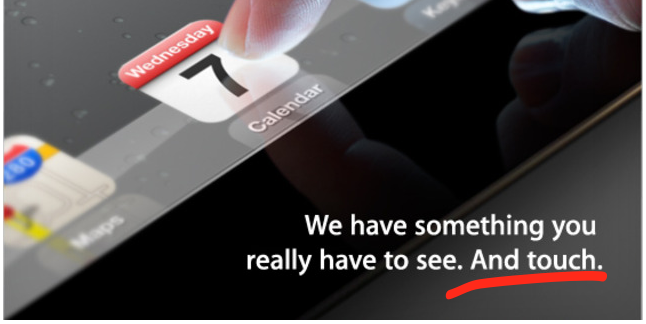 We are extremely skeptical about this one, but we are reposting it for the sake of discussion. According to Pocket-lint sources, Apple’s iPad 3 will include a new advanced tactile feedback technology that could add a completely new sensory input to the tablet. Unlike traditional haptic feedback that creates the sensation of physical touch with a small electrical stimulus (creating pulses that push against the finger), Apple’s solution allegedly puts an electrical pulse behind every pixel.

In theory, this would effectively create a 2048-by-1536 Retina display with so-called “textured feedback.” That is, it would add “texture” to objects on the screen when touched. Possible applications of this technology could be numerous and especially handy for both seeing and hearing issues. In addition, games would gain a whole new dimension if programmers could control screen pulses with a pixel-level accuracy and provide sensory perception of textures by varying friction between the screen and the user’s finger. 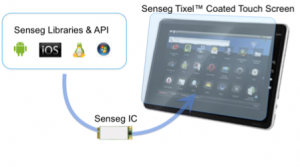 According to the article, Apple has been in talks with a Finnish startup called Senseg, the creators of advanced haptic display technology called E-Sense, depicted in the below clip. Now, when asked whether Apple licensed its technology, a company spokesperson told the publication “We won’t be making any statements until after Apple’s announcement.”

Furthermore, Senseg Senior Vice President Ville Mäkinen told Trusted Reviews that his company is “currently working with a certain tablet maker based in Cupertino.” The publication explains that the aim of Senseg’s technology is to “make a corrugated surface feel corrugated, a rough surface rough, a soft surface soft.”

On the other hand, Senseg CEO said less than four months ago that his company’s technology won’t be available for prime time for 1 to 2 years. “We’re certainly optimistic that we’ll have something in the next year. That might extend to 24 months,” he said in the below clip. The new iPad’s hardware design was likely finalized four months ago when Senseg’s CEO made those comments.

What is so special about Senseg’s technology, you ask? Read on…