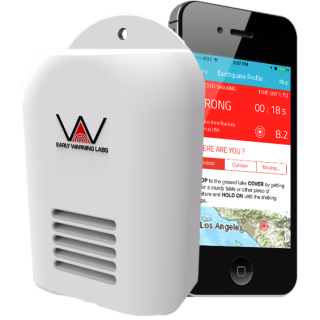 A joint venture between Early Warning Labs and the U.S. Government is working on app they claim will provide 30 seconds warning of an earthquake in California, Oregon and Washington, reports TechCrunch.

While 30 seconds doesn’t seem like much, founder of EWL, Josh Bashioum says that is enough time to take shelter and save lives. About 13,000 earthquakes in the 4.0 range caused 347 deaths in the U.S. in 2011. However, an earthquake of magnitude 7.0 could have majorly devastating effects. For Bashioum, the best way to get the word out would be via an early warning on a smartphone.

The company hopes to make money by selling a $100-ish physical warning device it describes as ‘Nest for earthquake warnings,’ but the app will be free.

The company’s website provides little detail on how it aims to achieve the 30-second warning. Earthquake alert systems are based on detecting earthquakes in progress outside cities in the hope that they will provide a little warning before they reach urban areas, but typically provide only a few seconds’ notice. EWL says that it aims to use a network of seismic sensors to “rapidly detect the initiation of an earthquake […] and issue a warning before significant ground shaking starts.”

Government advice if an earthquake hits while indoors is to get under a sturdy desk or table if possible, otherwise to stand against an interior wall away from windows and exterior walls. If outside, move away from buildings, streetlights and any other structure that may fall.

You can ask to be notified when the app is available by entering your name and email address into an online form and checking the app button.