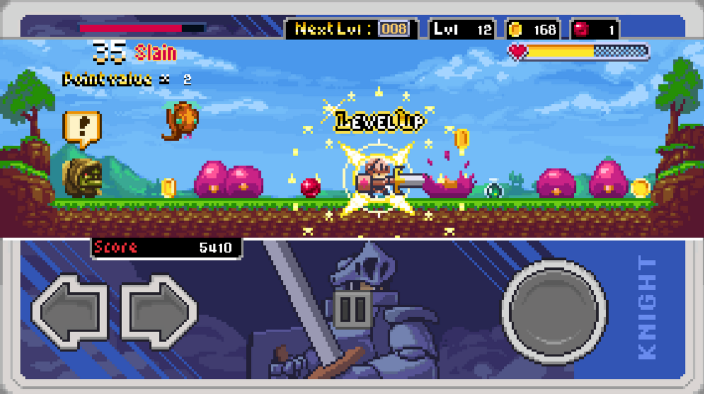 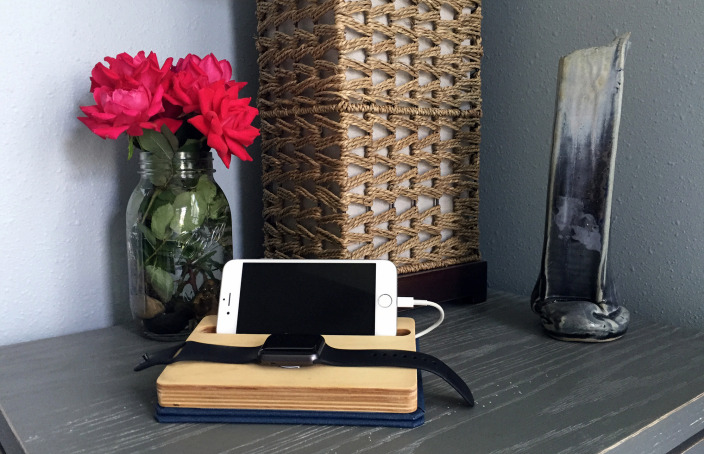 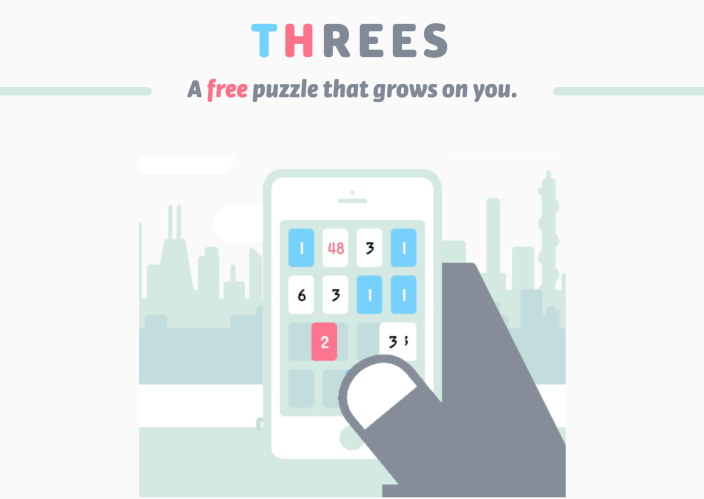 Father’s Day: Tommy Hilfiger, Nordstrom, more up to 50% off, DEWALT tools & gift cards from 20% off, more 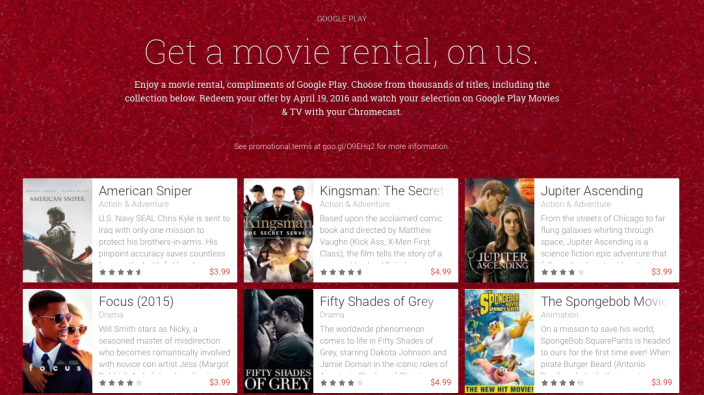 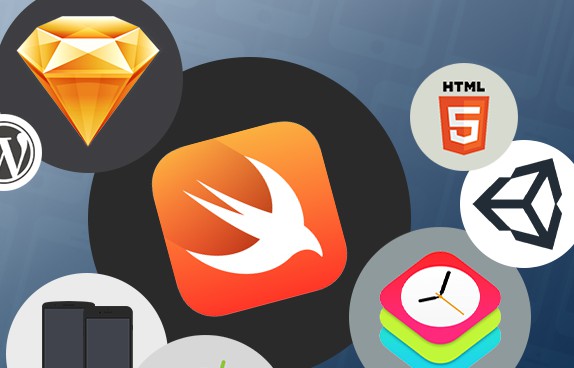 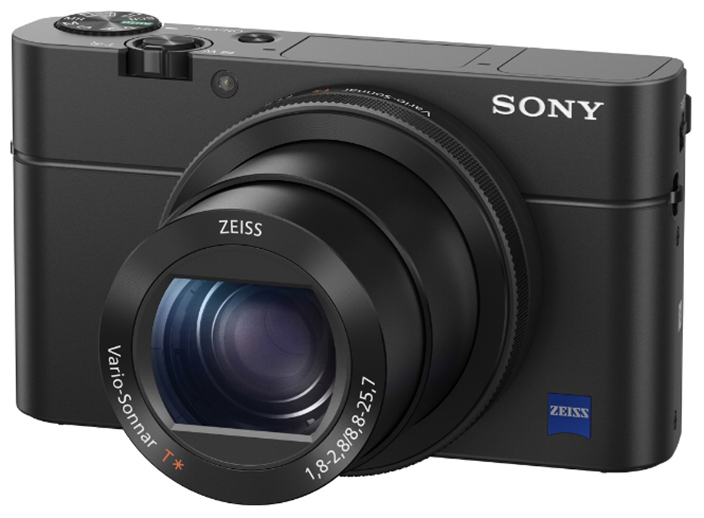 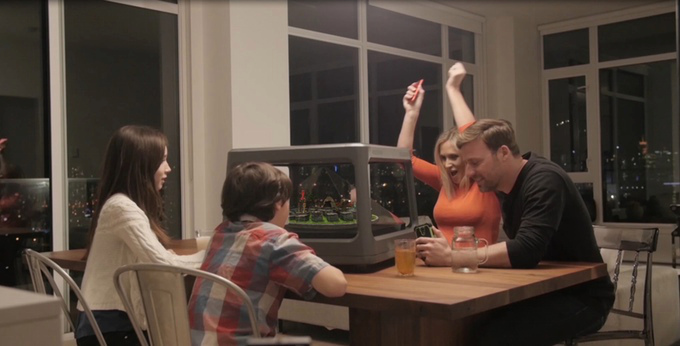 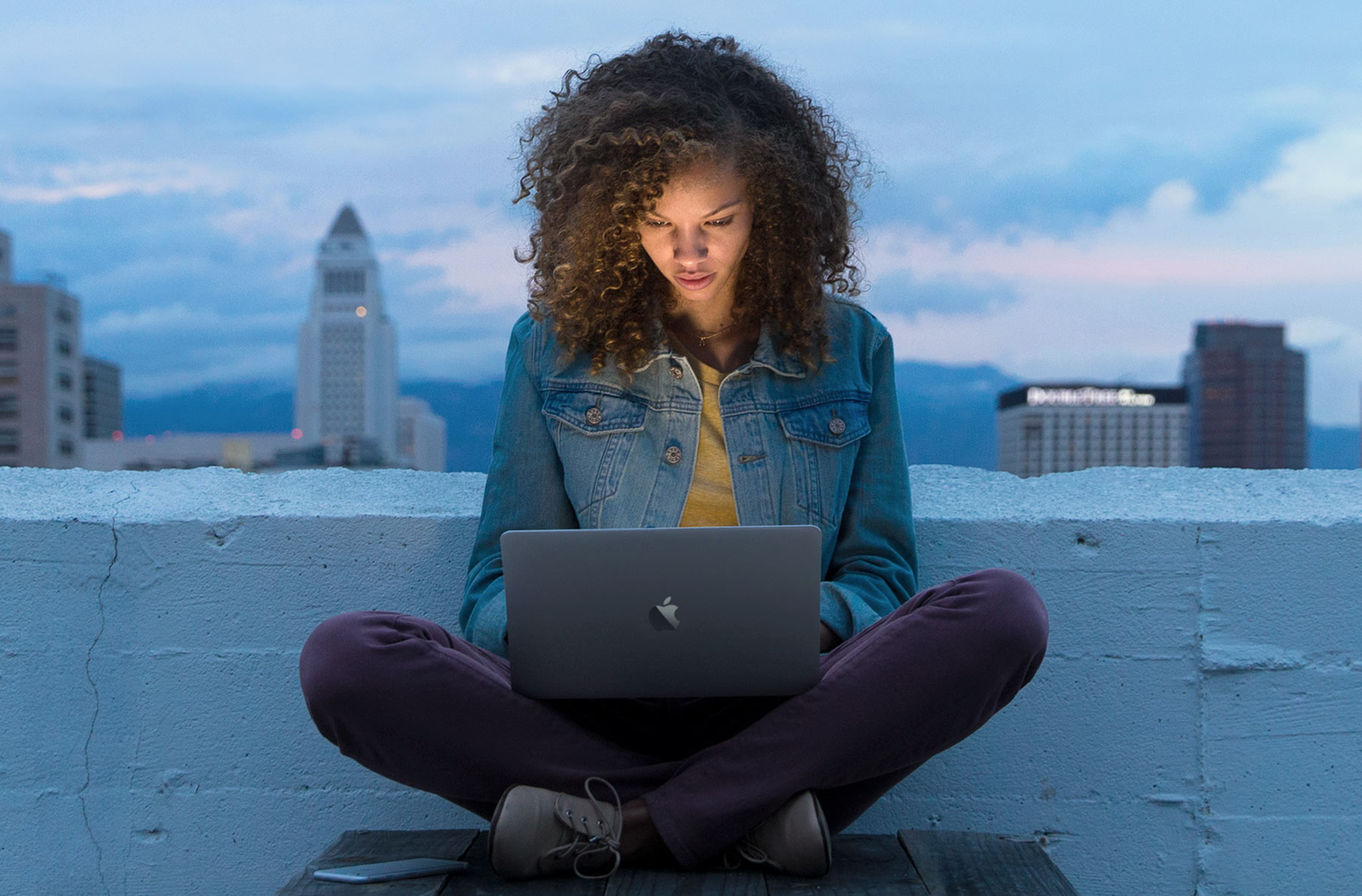 Apple has started to charge the credit cards of customers who ordered the highest-end 1.3GHz version of the 12-inch MacBook, according to emails from 9to5Mac readers. The customized, built-to-order MacBook went on sale earlier this month with 3-4 week shipping times for even the earliest orders, and Apple originally promised a delivery timeframe of May 8th to May 15th. As we saw with Apple Watch credit card charges earlier this week, it seems plausible that Apple already charging customers for the 1.3 GHz MacBook could indicate that shipments of the new laptop will begin occurring sooner than originally expected. However, readers have yet to report any signs of UPS or FedEx tracking numbers, or their Apple Online Store status pages moving from “Processing” to “Preparing for Shipment.”

END_OF_DOCUMENT_TOKEN_TO_BE_REPLACED 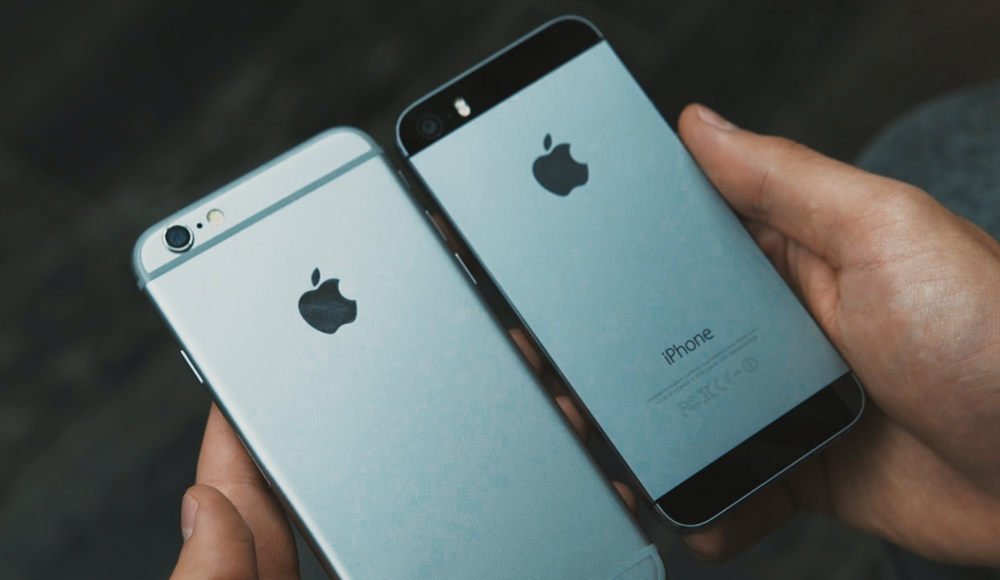 KGI analyst Ming-Chi Kuo, in a report this morning, states that both 4.7- and 5.5-inch models of the iPhone 6 will be launched next week and will both offer 128GB storage option. If Apple retains its usual three-tier structure this would suggest 32GB, 64GB and 128GB models – though it could be that 128GB would be a fourth tier, as with its iPad Air models. Or, as a previous report suggested, Apple could keep the 16GB option as a very low price tier and skip 32GB.

The same report predicts that the iPad Air 2 will be announced on the same day as the iPhone 6 rather than in a separate event in October. In this scenario, Apple would forgo any physical updates to the iPad mini line (perhaps price drops?). If true, this suggests that it could be a relatively minor refresh, perhaps simply with Touch ID added and a marginally thinner casing along with the RAM bumped up to 2GB for things like split window multitasking …  END_OF_DOCUMENT_TOKEN_TO_BE_REPLACED

Leaked iPhone 6 schematic doesn’t show 1GB of RAM, but it may indicate NFC on the way 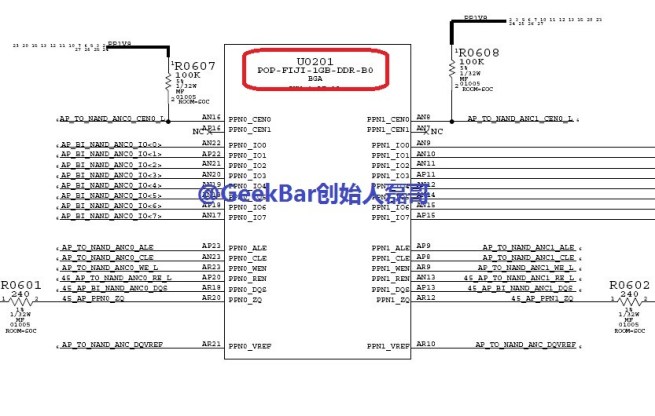 A set of schematics by GeekBar on Weibo have been making the rounds today, claiming to show both NFC support for the iPhone 6 as well as ‘confirmation’ that the device will feature just 1 GB of RAM, like the iPhone 5s.

Although the site focuses on the 1 GB description at the top of the image, it turns out that the schematic is actually a design for a NAND flash component (a storage chip, the same memory used in iPhones and other mobile devices for storing user data like music and photos) rather than RAM for the SoC.

Todd DeRego, a SoC memory engineer, says that the schematic does not have enough signals for it to be a DRAM interface. He also points out that the AP_TO_NAND text refers to an application processor to NAND link, indicating this memory is actually used as a way of storing the booting firmware and not the main memory of the iPhone. Although the RAM claim is almost certainly untrue, the NFC claim cannot be so easily dismissed.

END_OF_DOCUMENT_TOKEN_TO_BE_REPLACED 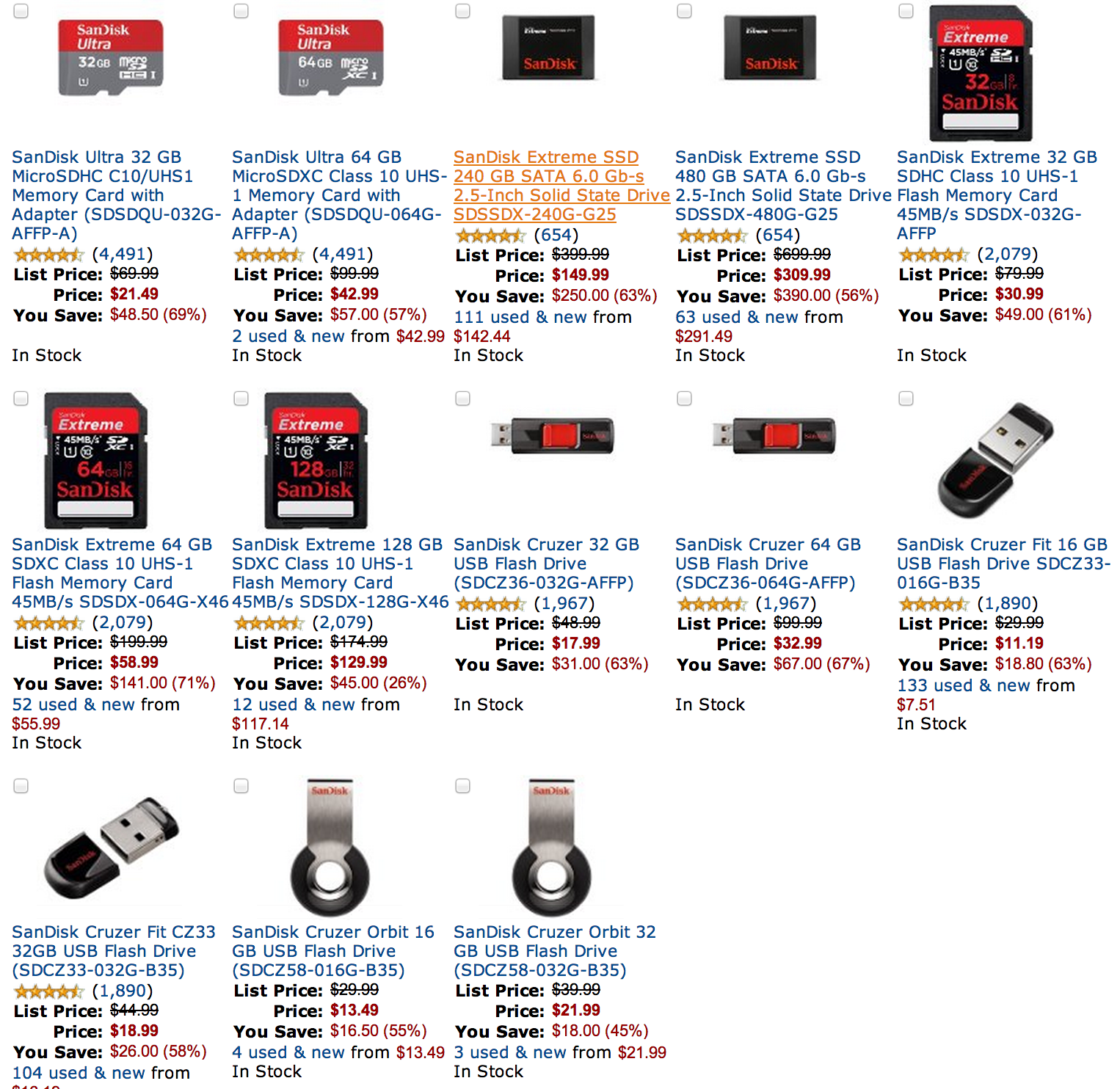 Amazon is having a 1 day SanDisk Storage sale across its lineup of products including: USB Sticks, Micro/SD Cards and SSDs. These are the lowest prices we’ve seen on many of these products. 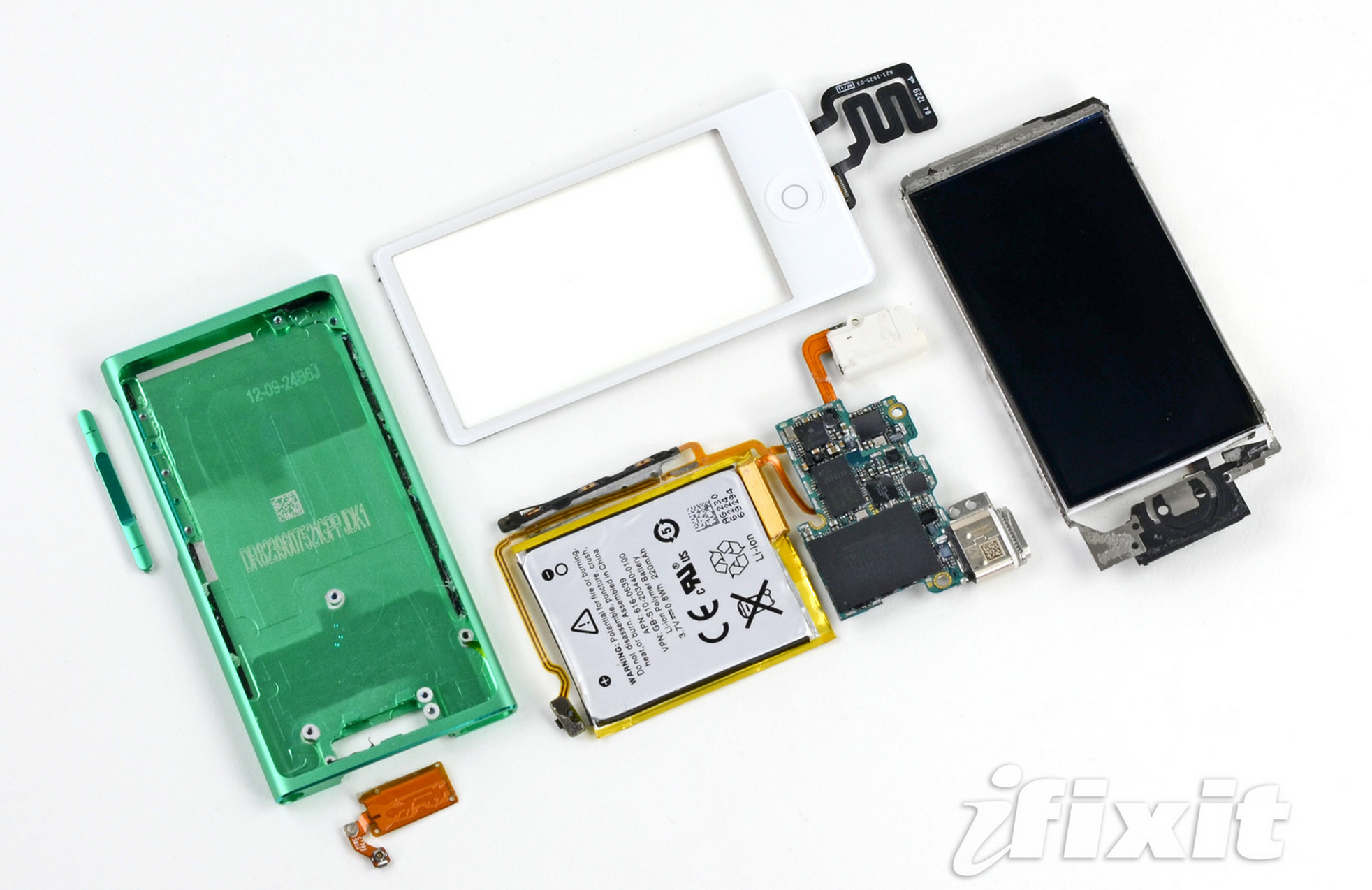 END_OF_DOCUMENT_TOKEN_TO_BE_REPLACED

Samsung just announced the production of its latest advancement in flash memory for mobile devices: the eMMC Pro Class 1500.

“Samsung Electronics announced that it has now begun volume production of an ultra-fast embedded memory for smartphones, tablets and other mobile devices in 16-, 32- and 64-gigabyte densities,” explained Samsung, as it noted the new chips feature read speeds of 140 MB/S and write speeds of 50 MB/S.

Those stats equal turbo web and video browsing, ameliorated multitasking, and a boost for processor-exhaustive gaming on smartphones and mobile devices. Users will love the performance enhancements, but manufacturers will enjoy the chip sizes. They go up to 1.2mm in thickness and just 0.6 grams in weight.

Get the full presser below.

END_OF_DOCUMENT_TOKEN_TO_BE_REPLACED

RunCore announced this week that it would offer its own SSD upgrade option: the RunCore Rocket Air SSD.

We are hoping to get a test unit and post a review soon.

RunCore also announced something else interesting this week: a SATA SSD so small that it could almost fit within the free space inside a MacBook Pro enclosure. Are you thinking what I am thinking? 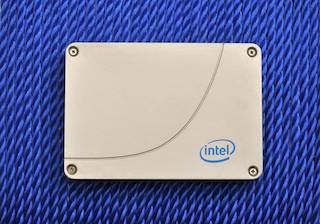 Intel announced today the new 520 Series solid-state storage code-named “Cherryville” and a number of tech websites and blogs already have their reviews up. The Verge has a nice review round up, and MacWorld’s own review provides an extensive overview of the pros and cons of the device. Fabbed on Intel’s 25nm Multi-Level Cell process, the 520 boasts sequential read/write performance of 550/520MBps when using a system with a SATA 3.0 6Gbps interface. The spec sheet positions the 520 Series as a solution for media creators and tech enthusiasts.

Still, Samsung’s comparable 830 Series came in fastest during Tech Report’s review (see the chart below the fold), with sequential read/write speeds of 500/350MBps on a SATA 3.0 6Gbps interface. We reviewed the Samsung 830 and found it to be the fastest available. In addition, the 830 SSD is almost $150 cheaper and it is going into MacBook Airs soon, unlike the 520 Series that comes in a 2.5-inch form factor—so it only fits inside MacBook and MacBook Pros.

END_OF_DOCUMENT_TOKEN_TO_BE_REPLACED 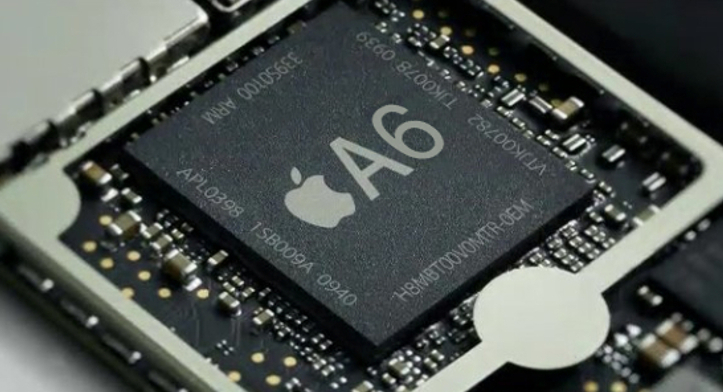 Following our in depth report last night on Apple turning its Anobit purchase into a permanent Israeli  presence, a new report in Hebrew by Israeli daily business newspaper Calcalist says Apple is looking to open a research center in Haifa by the end of February.  This follows its acquisition of NAND flash technology provider Anobit for a reported $390 million. The facility is said to be located at the Matam technology district south of the Haifa city, right in the neighborhood of Intel, Microsoft and Philips who also run R&D centers there.

The company reportedly received “several hundred resumes” for various engineering positions. Specifically, Apple is seeking hardware engineers in chip development with strong emphasis on electrical circuits, analogue and hardware testing and verification. The publication learned that Apple’s new research center in Israel is not related to the Anobit acquisition. In fact, Anobit employees are not expected to participate in the activities of the Haifa research center.

The Yedioth Ahronoth Group is also behind Yedioth Ahronoth, Israel’s most widely circulated newspaper publishes Calcalist. The paper reported in December of last year that Apple dispatched its Vice President of R&D Ed Frank to investigating possibilities of an Apple-run development center in Israel. Apple joins other Silicon Valley firms that operate R&D facilities in the country, such as chipmakers Intel, Qualcomm and Broadcom, Internet giants Google, Yahoo! and eBay, software makers IBM and Microsoft and China-based handset maker Huawei.

END_OF_DOCUMENT_TOKEN_TO_BE_REPLACED 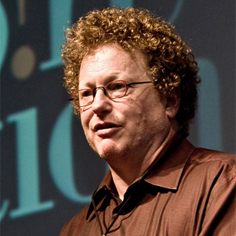 Apple’s Frank is a member of Carnegie Mellon University’s Board of Trustees and chairs the university’s Inspire Innovation campaign. He is apparently holding meetings with a bunch of Israeli startups who are hoping to wow the world’s most valuable technology company with next-generation solutions promising to bring flash storage prices down while substantially extending the lifespan of flash memory chips. The delegation headed by Frank has already met with executives at Intel Israel, the Calcalist story claims.

Globes chimed in with information from sources that “Apple has hired Aharon Aharon, a veteran player in Israel’s high tech industry, to lead the new development center”.

Should the Anobit deal go through, reporters Assaf Gilad and Meir Orbach write, Apple may be interested in further acquisitions of other Israeli startups specializing in innovative flash storage solutions. This includes XtremIO which develops server-based storage systems and its rival Kaminario, as well as DensBits which specializes in controller based signal processing to improve the operation of flash memory chip processors.

Ed Frank can be seen in the below clip talking about his experience at Carnegie Mellon University and how it continues to influence him today.

END_OF_DOCUMENT_TOKEN_TO_BE_REPLACED

Best Buy has the entry level 13inch MacBook Air on-sale for $1,099. This Mac retails for $1,299 and sports a 1.7GHz i5 processor, 128GB flash storage, and 4GB of memory (See below for full specs).  This is an awesome deal on one of the best portable Macs you can buy. END_OF_DOCUMENT_TOKEN_TO_BE_REPLACED

Staples has the 16GB SanDisk SDHC Card for $14.99 with free shipping.  That’s the lowest price we’ve seen for a 16GB SDHC card.  Class 4 represents a minimum speed of around 4MB/sec.

Looking at the graph above it really feels like Apple is taking huge leaps in growth while the rest of the industry is happy to be taking baby steps.  iSuppli today says that with the help of the iPad, Apple passed Samsung and HP in 2010 to become the largest consumer of semiconductors in the world.  While 2010 is relatively close still, 2011 will have Apple pulling away from the pack.

Apple in 2010 bought $17.5 billion worth of semiconductors, a 79.6 percent increase from $9.7 billion in 2009. This represented the highest rate of increase among the world’s Top 10 OEM semiconductor buyers, allowing Apple to rise up two positions to take the No. 1 rank in 2010. Apple in 2009 was the third-largest semiconductor purchaser, behind Hewlett-Packard Co. of the United States and Samsung Electronics Co. Ltd. of South Korea; it was sixth in 2008.

NAND Flash for iOS devices was a big contributor to Apple’s rise.

“Apple’s surge to leadership in semiconductor spending in 2010 was driven by the overwhelming success of its wireless products, namely the iPhone and the iPad,” said Wenlie Ye, Analyst for IHS. “These products consume enormous quantities of NAND flash memory, which is also found in the Apple iPod. Because of this, Apple in 2010 was the world’s No. 1 purchaser of NAND flash.”Apple is likely to continue increasing its semiconductor spending during the coming years at an above-average pace, allowing the company to extend its lead over Hewlett-Packard, Samsung and other OEMs in 2011 and beyond. In 2011 Apple’s semiconductor spending is expected to exceed that of Hewlett-Packard by $7.5 billion, up from $2.4 billion in 2010.