Many users experiencing a hidden /Users folder after upgrading to OS X 10.9.3, here’s how to fix

Update: The glitch may be related with the latest versions of Find My Mac and iTunes, according to testing by The Mac Observer.

Since upgrading to OS X 10.9.3, some users are reporting that their /Users folder is now hidden. This means the folder is no longer visible when looking at the root of the hard drive in the Finder, which is inconvenient for Macs with multiple users installed.

With OS X Lion, Apple took the liberty to hide the Library folder from OS X users. However, it does not seem like hiding the /Users directory is an Apple design decision. Many users are still seeing this folder after updating and the behaviour is consistent. The most likely conclusion is that is simply a bug that slipped through to final release, despite Apple’s new beta testing program. If you are affected by this bug, you can find out how to make your /Users folder visible again after the break …

END_OF_DOCUMENT_TOKEN_TO_BE_REPLACED

We fix: 10.6.8 network printer, optical audio out, and Parallels issues 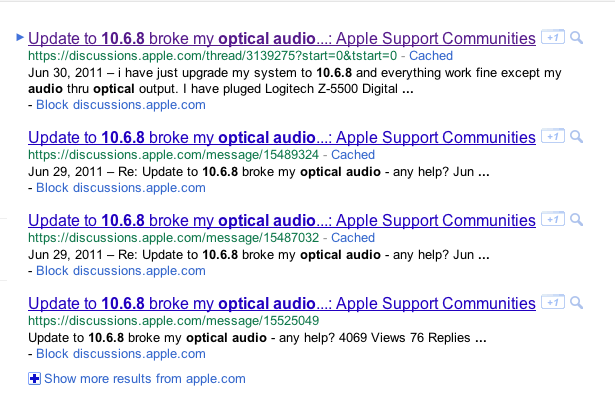 When updating the MacOS, bugs are usually a part of the ordeal. After upgrading to 10.6.8, 9to5Mac readers have had printers connected via their networks drop, optical audio out stop working, and some Parallels bugs. Never fear, there are fixes for all of these problems: END_OF_DOCUMENT_TOKEN_TO_BE_REPLACED