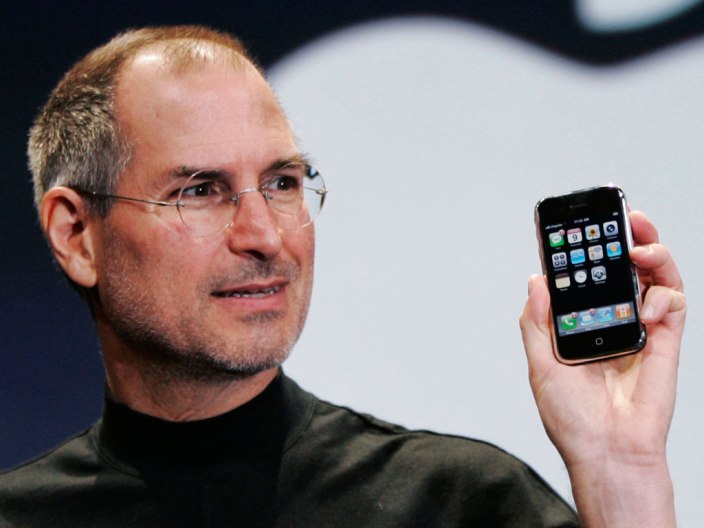 Fred Vogelstein, author of Dogfight: How Apple and Google Went to War and Started a Revolution, has published a massive, detailed account of the atmosphere around Apple in the lead up to the historic announcement of the original iPhone in 2007. This particular profile, which is entitled “And Then Steve Said, ‘Let There Be an iPhone,'” appears in The New York Times Magazine and portrays the exceptional excitement and nervous energy that encompassed the people who worked tirelessly to deliver what we now love and know as the iPhone.

Vogelstein begins with describing how Andy Grignon, the senior engineer behind OS X’s Dashboard and iChat, felt terrified ahead of his boss Steve Jobs demoing the iPhone publicly to world, namely because Grignon was responsible for the iPhone’s radios and his work was facing the ultimate challenge of sink or swim in front of the entire world, and more particularly the press.

Grignon and some colleagues would spend the night at a nearby hotel, and around 10 a.m. the following day they — along with the rest of the world — would watch Jobs unveil the first iPhone.

But as Grignon drove north, he didn’t feel excited. He felt terrified. Most onstage product demonstrations in Silicon Valley are canned. The thinking goes, why let bad Internet or cellphone connections ruin an otherwise good presentation? But Jobs insisted on live presentations. It was one of the things that made them so captivating. Part of his legend was that noticeable product-demo glitches almost never happened. But for those in the background, like Grignon, few parts of the job caused more stress.

Much of the piece illustrates the colorful gems of reality for the team behind the iPhone:

By the end, Grignon wasn’t just relieved; he was drunk. He’d brought a flask of Scotch to calm his nerves. “And so there we were in the fifth row or something — engineers, managers, all of us — doing shots of Scotch after every segment of the demo. There were about five or six of us, and after each piece of the demo, the person who was responsible for that portion did a shot. When the finale came — and it worked along with everything before it, we all just drained the flask. It was the best demo any of us had ever seen. And the rest of the day turned out to be just a [expletive] for the entire iPhone team. We just spent the entire rest of the day drinking in the city. It was just a mess, but it was great.”

Read on for more entertaining anecdotes and tales of what happened behind-the-scenes (and in the fifth row, in this instance) that made Apple’s tremendous announcement possible (and endurable). END_OF_DOCUMENT_TOKEN_TO_BE_REPLACED