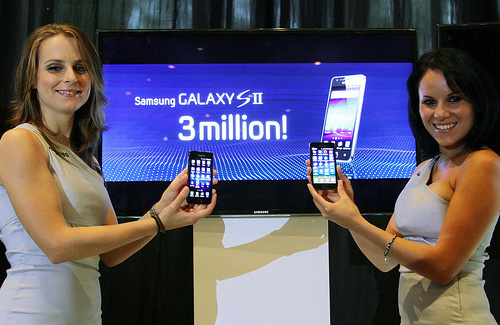 Apple is intent on stopping Samsung from marketing and selling “copycat” Galaxy devices in all of the European Union.

Apple has already tried to ban the Galaxy Tab 10.1 in most of Europe (injunction lifted), but today they are going even farther with their legal proceedings, asking a Dutch court to ban all Galaxy series devices. The ban includes the widely popular Galaxy S II, which has seen some success in Europe.

Apple’s complaint, seen by Webwereld, a Dutch IDG publication, seeks an injunction for the entire Galaxy series. This includes smartphones — the Galaxy Ace, Galaxy S and Galaxy SII — and tablets: the Galaxy Tab 7 and Galaxy Tab 10.1. Other Galaxy devices, like the Gio, Nexus, 551, Europa, Apollo and Mini are also involved, albeit only in a footnote in which Apple states, “It is expected that these devices are also covered by one or more of the patent rights invoked.”

On top of trying to ban sales, Apple is trying to push the thought of Samsung sending a letter to all of their partnered retailers within 14 days to end sales. Stated strongly:

For the record we would like to mention the fact that by storing, offering and/or selling of the above mentioned Galaxy smartphones [and tablets], you commit infringement of the intellectual property rights of Apple Inc.

The trial will take place in The Hague, Netherlands September 15th, and the judge said  if he grants any injunctions, they would take effect no sooner than October 13, reported Webwereled (via Computerworld)