With just about everyone in the tech industry getting in on the ALS Ice Bucket Challenge to raise awareness for ALS (including Apple’s own Tim Cook and Dr. Dre), Samsung decided it would also be an appropriate time to mock the iPhone and others in the process. END_OF_DOCUMENT_TOKEN_TO_BE_REPLACED 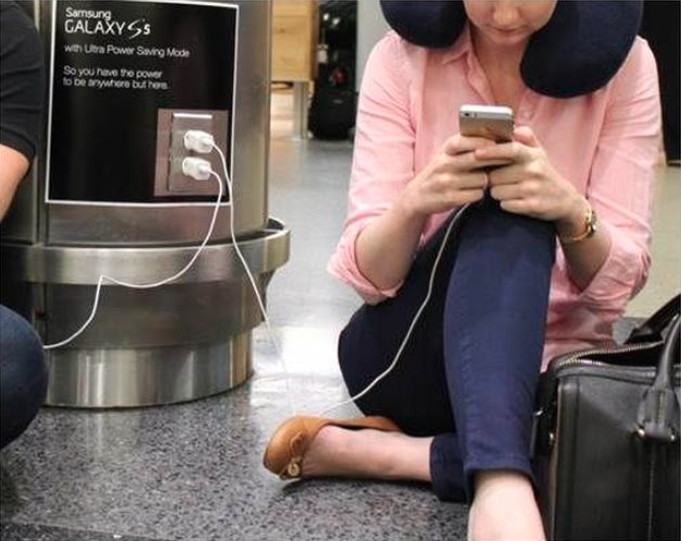 Last month Samsung ramped up the anti-Apple rhetoric with a new ad campaign that depicted iPhone users as “wall huggers,” constantly tethered to a power outlet due to the inferior battery in their non-Samsung smartphones. Today Cnet reports that the company has taken its campaign one step further by trolling real-life iPhone users at power outlets throughout major airports.

The new ads take the form of posters near power outlets that read, “Samsung Galaxy S5 with Ultra Power Saver Mode,” followed by a tagline that appears to poke at Apple’s own recent ad campaign: “So you have the power to be anywhere but here.” If you’d like to take a gander at the latest salvo in the ever-escalating flame war between Apple and Samsung, you’ll be able to do just that very soon at JFK, O’Hare, and Midway airports. Samsung says even more airports could be getting the ads if they’re successful in the first three.

END_OF_DOCUMENT_TOKEN_TO_BE_REPLACED

Samsung is continuing its approach of pushing anti-iPhone ads on its YouTube channel. Today’s ad showcases two friends, an iPhone user and a Galaxy S5 user, speaking to each other about the upcoming iPhone 6’s larger screen. “Dude, iPhone might be getting a bigger screen” excitedly states the iPhone user  “That hasn’t happened yet?” slyly responds the Galaxy S5 user. Check out the full advertisement for yourself below:

END_OF_DOCUMENT_TOKEN_TO_BE_REPLACED

Sales channel data from 35 countries compiled by Counterpoint shows that the iPhone 5s remained the world’s best-selling phone as of May, some eight months after its launch. This backs up a report from ABI Research that the phone had retained the number one slot through Q1.

Apple’s iPhone 5s continues to be the bestselling phone in the world, a spot that many expected to be taken by Samsung’s Galaxy S 5. The highly anticipated Galaxy S5 comes in at second place but still a quite distant number two in terms of (sell through) unit sales.

The news wasn’t quite so good for the iPhone 5c, which came in at number 5, behind both the Samsung S5 and last year’s S4 – as well as the company’s Note 3 phablet.

The iPhone 4S keeps on trucking: two-and-a-half years after its release, Counterpoint shows it at number 6 – one notch down from ABI’s Q1 data.

Overall, Samsung has roughly twice Apple’s market share thanks to a huge range of handsets at all price levels, a statistic that is unlikely to keep Tim Cook awake at night even if market share doesn’t increase, as Apple takes home the lion’s share of the profits – something you can watch in real-time thanks to an interactive graphic.

It’s widely expected that the iPhone 6 will boost Apple’s share of the market as it taps into demand for larger displays, with Cook saying last month that there is more growth to come from Android migration. 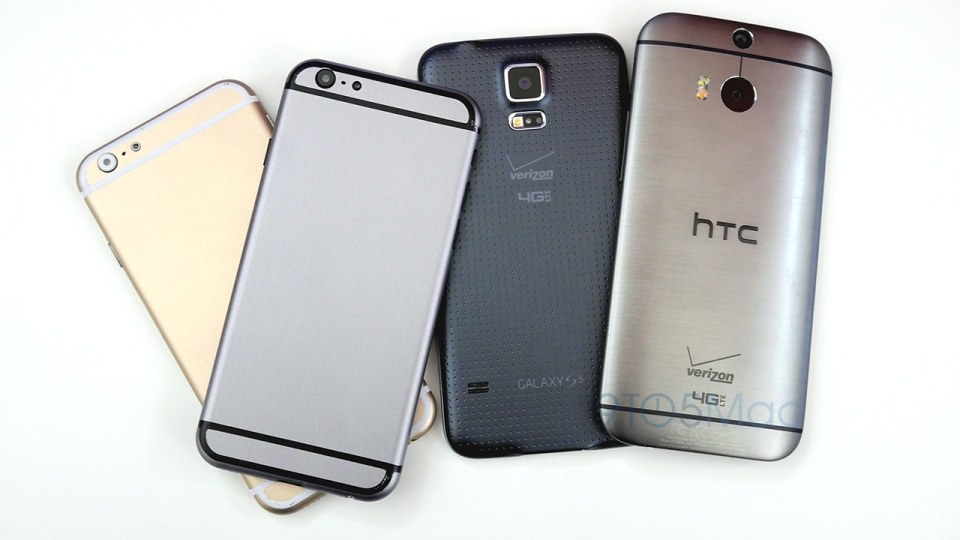 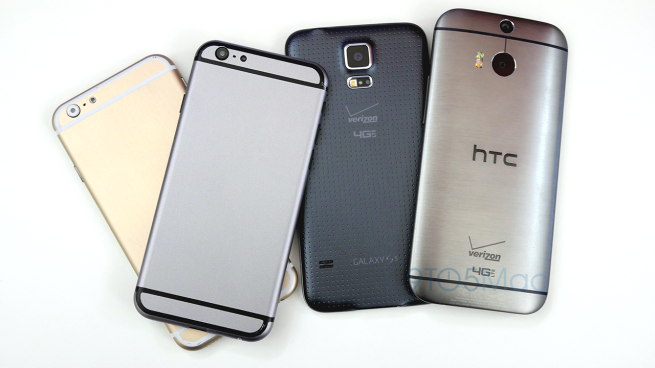 Based on all of the iPhone 6 dummy units we’ve seen, this rumored design closely resembles Apple’s fifth generation iPod touch, but that’s not all. As shown in the video below, the alleged iPhone 6 design looks very similar to another flagship smartphone released this year.

The HTC One M8 and iPhone 6 mockup look like cousins or long-lost brothers when it comes to their design. Of course there’s no confirmation that Apple is actually using this design for the iPhone 6, but almost all of these mockups have been manufactured based on “leaked” schematics and specifications.

END_OF_DOCUMENT_TOKEN_TO_BE_REPLACED

Samsung hasn’t officially launched its next-gen smartphone, the Galaxy S5, just yet but the comparisons to Apple’s latest model are already starting. The S5 features a fingerprint-reader much like the iPhone’s, so YouTube user iCrackUriDevice put both phones head-to-head to determine which device sported the superior scanner.

Both devices have pros and cons. The iPhone 5s has the ability to scan your fingerprint from any angle, while the Galaxy can only detect a downward swipe across the scanner at a very specific angle. On the other hand, the Galaxy can use its fingerprint reader to authorize PayPal purchases, while the iPhone can only authenticate sales on Apple’s own iTunes store.

Should Apple open the iPhone’s fingerprint sensor to devs in iOS 8? [Poll]

With Touch ID in the iPhone 5s, Apple wasn’t the first to integrate a fingerprint sensor in a smartphone, but it certainly popularized the feature as other manufacturers race to build similar technology into their next-gen iPhone competitors. HTC is packing in fingerprint sensors in its latest flagship devices and Samsung announced its new Galaxy S5 earlier this week with finger scanning as one of the standout upgrades. The verdict is still out on how Samsung’s tech compares to Touch ID, but it is interesting to see how others are using fingerprint sensors while Apple keeps it closed to developers and offers very limited applications. With Samsung letting app developers access the new S5’s fingerprint scanner for mobile payments and more right out of the gate, should Apple open the fingerprint sensor to devs in iOS 8? END_OF_DOCUMENT_TOKEN_TO_BE_REPLACED

Jealous of S5 heart rate monitor? Your iPhone can already measure your heart rate with these apps

When Samsung unveiled its new flagship Galaxy S5 yesterday, the big news was the inclusion of a fingerprint scanner and heart rate sensor. The fingerprint scanning of course brings it up to par with Apple’s TouchID functionality, the standout feature and big selling point for the iPhone 5s. The heart rate sensor, however, is something not included in the current iPhone lineup and something Samsung will spend a lot of time marketing as fitness and health wearables like its new smartwatch lineup become big business in 2014. But did you know you can already measure your heart rate on iPhone using the device’s built-in camera?

A number of apps on the App Store, such the “Heart Rate Monitor” app just launched by PlusSports, allow you to accurately measure your heart rate by simply placing your face or fingertip in front of the camera lens. Another app available on the App Store that we’ve tested and works well is Instant Heart Rate. Popular fitness app maker Runtastic also has its own heart rate monitor and pulse tracker app.

The experience of using these apps is almost identical to the S5, which also forces the user to place a finger over a sensor on the back of the device and wait several seconds for a reading.

It’s possible Samsung would tell you that its built-in heart rate sensor is more accurate or feature-filled, but from our tests and reviews from others, the iPhone apps are remarkably accurate.

If a report by SamMobile is correct, Samsung’s forthcoming Galaxy S5 won’t just have a similar name to the iPhone 5s, it will also have a fingerprint sensor embedded in the home button. The S5 is expected to be officially announced at Mobile World Congress in Barcelona on 24th February, replacing the Galaxy S4, though it may not go on sale until March or April.

It had earlier been rumored that the S5 would have iris recognition, but a KGI Research document pointed instead to a fingerprint sensor, which SamMobile claims to be able to confirm via sources inside Samsung.

We are finally confirming that Samsung’s upcoming flagship device, the Galaxy S5, will be equipped with a fingerprint sensor […]

Samsung hasn’t opted for on-screen buttons and is still using physical buttons, like it has been using in the past on all of its flagship devices. The sensor itself works in a swipe manner, which means that you would need to swipe the entire pad of your finger, from base to tip, across the home key to register your fingerprint properly …

From SamMobile‘s description, the fingerprint technology appears to be less sophisticated than Touch ID, requiring users to pull their finger across the button rather than the one-touch system offered by the iPhone 5s. The ‘swipe across’ type of fingerprint scanner dates back many years.