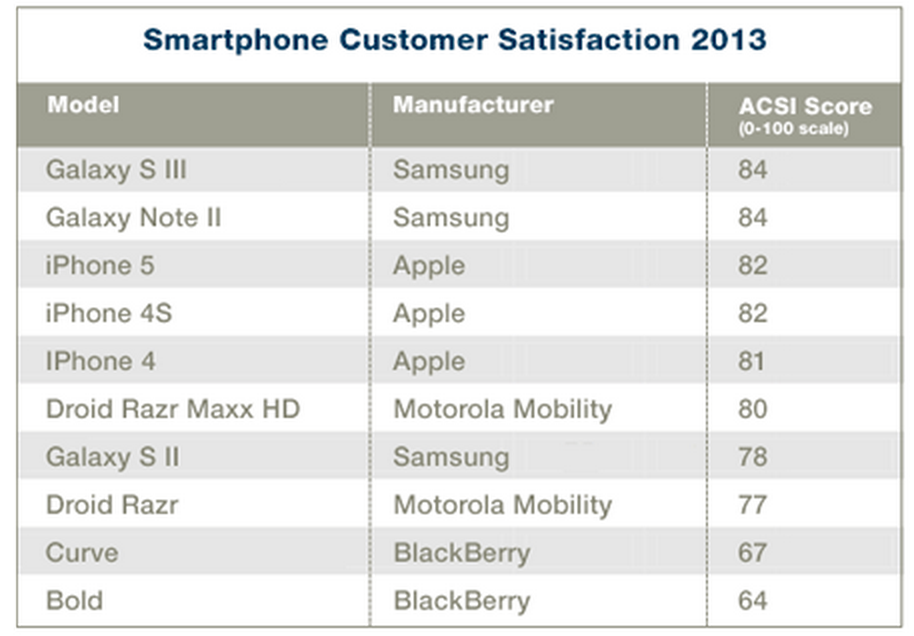 We’re used to seeing Apple at the top of customer satisfaction surveys– it even promotes its multiple JD Power wins as the highest ranked smartphone and tablet on its website. However, the latest numbers from the American Customer Satisfaction Index has Samsung taking the lead from Apple, at least when it comes to smartphones.

In May, the ACSI report, which surveys over 70k US consumers, showed Apple continued its lead for customer satisfaction, but Samsung was quickly closing the gap. The new ACSI report covering only smartphones shows Samsung has since been able to surpass iPhone thanks to strong scores from its Galaxy S III and Note II:

Samsung’s flagship model for 2012, the S III, receives an ACSI benchmark of 84 (on a 0 to 100 scale), beating Apple’s iPhone 5 at 82, the company’s most recent smartphone offering. Another Samsung model, Note II, shares the top of list at 84. Galaxy S4 is not included because the ACSI study was fielded just prior to its launch.

Apple still takes the top spot in many countries, including Samsung’s home territory, and also continues to lead in overall customer satisfaction outside of the smartphone category:

While U.S. customers give Samsung’s smartphones the top scores, Korean consumers prefer Apple. According to the National Customer Satisfaction Index (NCSI) in South Korea, which uses the same technology as the ACSI, the iPhone 5 has higher customer satisfaction than Galaxy S III… Unlike Apple, which has a smartphone-only lineup, Samsung offers both feature and smartphones. At 76, Samsung continues to lag Apple for overall customer satisfaction. Nevertheless, the company’s 7% gain in 2013 is a clear reflection of the strength of Galaxy S III.

Another somewhat surprising result today, and one T-Mobile’s John Legere definitely won’t be happy about, is JD Power’s 2013 wireless customer service satisfaction survey. Coming out on top for the first time is AT&T, ranking the highest in customer service and many other categories in the survey, and followed by Verizon, Sprint, and T-Mobile: END_OF_DOCUMENT_TOKEN_TO_BE_REPLACED

Samsung announced the Galaxy S III today at the Unpacked event in London. Apple’s biggest competitor in the smartphone space, and the only other manufacture making any significant profit, showed off the upgraded 4.8-inch 720P SuperAMOLED display device that now weighs 133 grams among other minor spec improvements.

A few of the features shown off were S-Voice, which is like Siri, Scan and Match for Music (iTunes Match), and Airplay-like “AllShare Cast” for streaming content to your HDTV through the AppleTV-like AllShare Cast Dongle.  Samsung also named its iPod nano-like music player “Pebble,” which bears a resemblance to the iOS Kickstarter watch that goes by the same name.

One cool new thing is a face recognition photo app. It lets you instantly send pictures to your friends that it recognizes in your pictures. The S III also has a pop-up player, which is sort of an app version of picture-in-picture that allows you to watch a movie while you switch around to other applications.

Initial reviews seem a little luke-warm on the device. Most call it an incremental update from the S II with new features that also brought some new flaws.

Oh, and Phil Schiller will not like this news: Flipboard for Android is debuting on the S III.