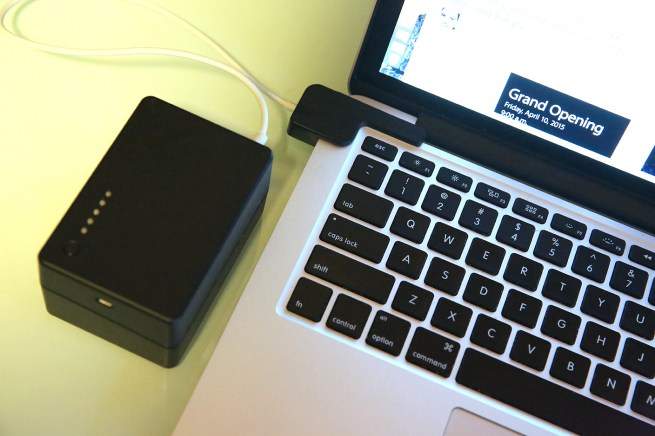 Thanks to Apple’s patent on the MagSafe connectors used in MacBook Airs and Pros, the list of third-party external batteries for MacBooks previously began with Hyper’s HyperJuice/HyperJuice 2 and ended with Lenmar’s ChugPlug — not much of a variety. Apple’s legal department chased Hyper for attaching harvested MagSafe connectors to its batteries, and Lenmar chose a workaround, sending ChugPlug’s power indirectly though an Apple wall adapter. Neither solution was ideal. It took until now for a completely different third solution to appear: BatteryBox ($220) from Gbatteries Energy.

BatteryBox is the first MacBook power option I’ve tested that doesn’t require either MagSafe or an Apple wall adapter to function. Since the developers went out of their way to create something that won’t run afoul of Apple’s legal team, there’s absolutely nothing Mac-like about its brick-like rectangular design. And it’s not cheap, priced between the two HyperJuices and higher than ChugPlug, which can now be had for only $100. But it works, adding a 60-watt-hour additional battery to the 38-95-watt-hour cells already inside MacBook Airs and Pros. So if you’re on the road without access to a power outlet and need to add hours of additional runtime to your Apple laptop, this is a viable alternative….