NVIDIA announced a new series of notebook GPU’s today branded as the 700M series. Introduced today are five new graphics cards in total, and NVIDIA said they would be available in a long list of laptops over the next few months. The five new graphics cards include two options aimed at the “mainstream segment”, the 720M and the 735M, while the remaining three, the 740M, 745M, and 750M, will be “for the performance segment” of the market. 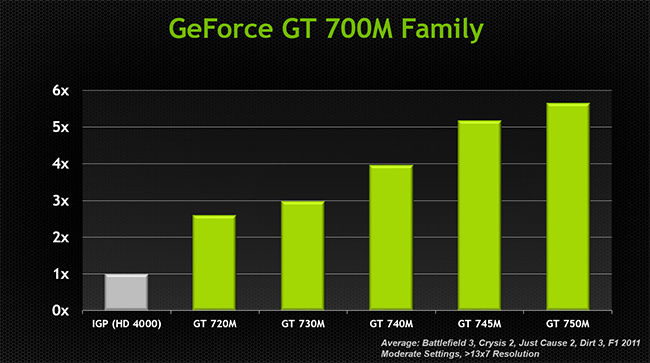 The graphics cards are being touted by NVIDIA to “maximize performance and experience,” but they also more power efficient than their predecessors. Because the 700M Series is notebook-only, expect these to be less powerful than a desktop version of the 700 Series that may be announced sometime in the future.

Helping our new 700M chips reach such lofty levels of performance is GPU Boost 2.0, a GPU innovation that extracts every ounce of available computing power from the graphics processor. Before GPU Boost, GPUs were held back by synthetic benchmarks that pushed chips and power usage to the limit, far beyond the levels typically seen when playing games. This ‘worst case scenario’ forced us to throttle GPUs, leaving spare performance on the table when playing games.GPU Boost resolves this problem by monitoring power usage and temperatures, enabling the GPU to use every last ounce of performance without exceeding safety or comfort limits.

While the press release from NVIDIA said the new GPUs will be available in nearly every notebook maker other than Apple, it is possible these GPUs will be seen in the next-gen MacBook Pro with Retina Display. The current 15-inch MacBook Pro with Retina Display sports a NVIDIA 650M GPU, as does the high-end 21-inch iMac model, so an upgrade to the 700M series only makes sense.

The full press release is available below.

With no effort or input from the notebook user, the technologies work in the background to save battery life, enhance performance and enrich the visual experience — providing the best notebook experience the GPU can deliver. They include:

NVIDIA® Optimus™ technology, which enables extra-long battery life by switching the GPU on and off so it runs only when needed.

GeForce® Experience™ software, which adjusts in-game settings for the best performance and visual quality specific to a user’s notebook and keeps GeForce drivers up to date.

“There is an elegant simplicity to NVIDIA’s GeForce 700M notebook technologies,” said Rene Haas, vice president and general manager of the notebook business unit at NVIDIA. “You use your notebook how you want, and GeForce makes your experience awesome.”

More information about the GeForce 700M family of notebook GPUs is available at www.GeForce.com.