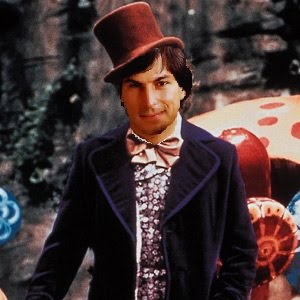 There are a few interesting stories coming out of Ken Segall’s “Insanely Simple: The Obsession That Drives Apple’s Success,” which is available now. Perhaps the most intriguing story is the one about Apple’s late CEO Steve Jobs and his idea to celebrate the sale of the millionth original iMac shortly after his return to the company. Jobs’ idea was apparently to hold a Willy Wonka style competition –golden ticket and all– allowing a lucky recipient to win a behind-the-scenes trip to Cupertino and a free iMac. He also planned to dress up in the full Willy Wonka outfit to greet the winners, rockin’ a top hat, velvet blazer, and bow tie (via MacRumors):

Steve’s idea was to do a Willy Wonka with it. Just as Wonka did in the movie, Steve wanted to put a golden certificate representing the millionth iMac inside the box of one iMac, and publicize that fact. Whoever opened the lucky iMac box would be refunded the purchase price and be flown to Cupertino, where he or she (and, presumably, the accompanying family) would be taken on a tour of the Apple campus.

Steve had already instructed his internal creative group to design a prototype golden certificate, which he shared with us. But the killer was that Steve wanted to go all out on this. He wanted to meet the lucky winner in full Willy Wonka garb. Yes, complete with top hat and tails.

The idea was apparently cancelled when Apple figured out California state law required the contest to not require a purchase for entry. Apple would have had to open the contest to all, likely squashing Jobs’ idea of handing out the prize to new iMac purchasers.

Last year, CollegeHumor ran its own darker version of Charlie and the Apple factory with Jobs playing the Wonka role: END_OF_DOCUMENT_TOKEN_TO_BE_REPLACED