Report: Apple to return to Nvidia for Mac Pro graphics in Nehalem update 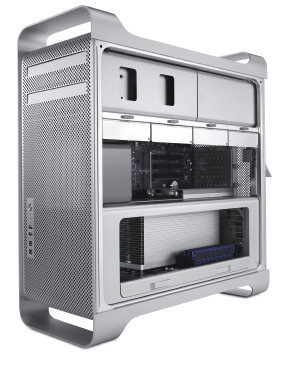 It looks like Apple could (again) select the graphics giant Nvidia as the primary GPU provider for the upcoming Mac Pro hardware refresh. According to a mostly speculative story by MIC Gadget based on unnamed industry sources, new Mac Pros will feature Intel’s upcoming Ivy Bridge chipset fabbed on the chip maker’s latest 22-nanometer Trigate transistor technology (no surprise there). According to Intel, 22nm Ivy Bridge silicon claims a 37 percent speed jump and lower power consumption compared to the chip giant’s 32 nanometer planar transistors. ‘Trigate’ Ivy Bridge chips can feature up to eight processing cores and are more power-savvy, so they should help scale frequency, too. On a more interesting note, MIC Gadget speculates Apple could switch back to Nvidia as the primary supplier of next-generation GPUs for the new Mac Pros.

Nvidia has their “Kepler” platform due out around the same time as Intel is making their changes, and our sources within the company indicate that they have chosen to have Nvidia lead the charge so to speak on the graphics front.

Eagle-eyed readers could mention that AMD recently released the Radeon HD 7970 graphics card powered by the Tahiti GPU (its nearest rival is Nvidia’s GeForce GTX 590), with observes deeming it Apple’s go-to graphics card for future Mac Pros. Indeed, traces of support for Tahiti-driven AMD GPUs are found in Mac OS X Lion 10.7.3, at least indicating people might be able to upgrade their future Mac Pro with this card. Oh, and it’s great for Hackintosh builders, too.