A Harris poll of almost 40,000 American consumers on more than 1,500 brands across 155 categories saw Apple retain Brand of the Year in three categories.

What really stands out is that in all three of the categories Apple brands are measured – Computer, Tablet and Mobile Phone – its Brand Momentum scores are in the top 30 of all 1,500 brands evaluated in the study, showing that consumers see this as a brand of the future.

The top four brands in each of the three categories were:

The ratings may provide some comfort for those who feared Apple’s enviable brand popularity would suffer post-Steve. 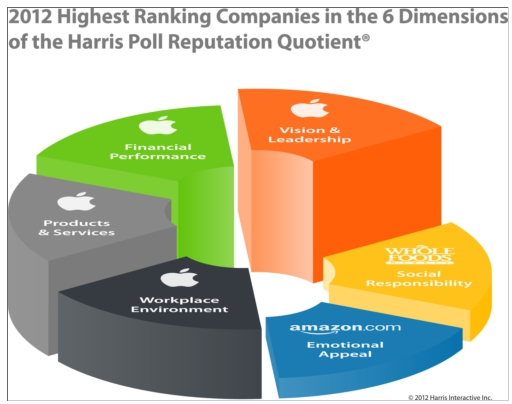 Apple earned the top spot in a new corporate reputation study by Harris Poll (via TechCrunch). It awarded Apple with a corporate reputation quotient of 85.63, which is enough to displace a second-ranked Google with a score of 82.82. Only eight companies earned an RQ score of 80 or above that denotes “excellent reputation.” Apple’s achievement is even more noteworthy knowing Google ranked as last year’s most reputable corporation. Facebook and Intel did not appear on the list this year at all. As for Apple’s rise:

Apple’s current dominance is built on strong investments in its brand, predominantly through its products and services. This one-dimensional approach to building reputation has ultimately yielded high associations with all six reputational dimensions. Conversely, Hewlett Packard, which once out-ranked Apple, has headed in the reverse direction. Hewlett Packard’s slowly eroding reputation has been injured by negative perceptions on Ethics and Vision & Leadership dimensions, and its brand is beginning to feel the damage.

Beverages giant Coca-Cola (No. 3), online retailer Amazon (No. 4) and multinational confectionery, food and beverage conglomerate Kraft Foods (No. 5) round out the top five. Apple ranked the highest in Financial Performance, Products & Services, Vision & Leadership and Workplace Environment—four  out of the six key dimensions in reputation. Interestingly, Amazon.com rules the Emotional Appeal category, even though it lacks brick-and-mortar stores and has a limited human interaction with its customers…